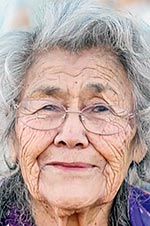 FRUITLAND, N.M. – Our precious mother, grandmother and great-grandmother, Lorene Phyllis Hersey, passed on and into the arms of our Lord and Savior, Jesus Christ, the morning of May 27, 2022, surrounded by her loving family.

A celebration of life was held on Tuesday, May 31, 2022, at the Hills Church (aka Pinon Hills Church) in Farmington, with viewing taking place before the service. Interment was at the Kirtland/Fruitland Cemetery in Kirtland.

Lorene was born in Lower Fruitland on Feb. 2, 1934, to John Dick Barber and Ałk’i jiibaa’ Nez Barber, meaning, ‘One who wars on all sides and comes back together” (a powerful name). She was Ashiihii, born for Tachii’nii. Her Navajo name was K’éh yiłnazbaa’, which means “friendly wherever she goes.”

From an early age, Lorene learned the importance of hard work and a strong work ethic from herding sheep. She lived and herded sheep in Fruitland and Table Mesa, New Mexico. She longed to attend school but was told to stay and herd sheep. However, at age 12, her aunt agreed and signed her up for a five-year school program at Stewart Indian Boarding School in Stewart, Nevada. She truly enjoyed her time there learning different life skills, like how to manage money, how to find a job, etc. While she was there, she met Wilson T. Brown with whom she married and later had seven children. After finishing school, she and Wilson did some work in San Jose, California, area.

Lorene moved back to the Gallup area and worked at the Ranch Kitchen as a waitress, then with Tse Bonito Elementary as a cook’s helper and school bus driver. Lorene moved back to Fruitland after divorcing Wilson. She later met/married Harold E. Hersey with whom they adopted her cousins’ children, Stephanie, and Eldon. She just could not give up yet another child when she and Harold were foster parents to many children.

Lorene had a tremendous love for the Lord and her faith in God was strong. She traveled the Navajo Nation and the United States as part of the singing ministry the Fruitland Gospel Trio, sharing the love of God. Lorene recorded six albums including one solo album. She also participated in a rest home ministry sharing God’s love through song and the Word. Her faith was evident in her walk and talk. She always said, “The Lord is with me always.”

In the year 2000, Lorene was selected Women of the Year in the state of New Mexico. Thirty women were selected out of 30,000 applicants. Then-Gov. Gary Johnson presented the plaques.

Lorene loved her family and friends and cherished the time she spent with them. She is greatly missed by all those who knew her.

Our family is so grateful for the enormous outpouring of love and support during this difficult time. Thank you for your continued prayers.

Yoe graduated from Navajo Pine High School. He was employed with Route 66 Tire Shop in Gallup.

His interest was helping his family and friends, and he enjoyed fixing things.

Yoe is survived by his daughter, Erika Yoe; mother, Marie Cornfield; siblings, Stanley Cornfield, Cheryl Lowley and Ricky Yoe; and one grandchild. Yoe is preceded in death by his father Gilbert Yoe Sr.

His clans are Coyote Pass, born for Edge Water.

Pallbearers were his family members.

Harold Tracy graduated from Tuba City High School. He worked in construction as a wood framer and carpenter. He was also a gifted guitar player and he was very fond of playing Blues music. 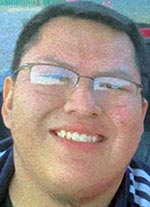 Begay attended Window Rock Unified School District, and Navajo Pine High. He was a laborer, and worked in mechanics. He liked to draw, watch movies, throw footballs, and he enjoyed taking long walks and loved the outdoors and fishing.

Begay is preceded in death by his father, Lee C. Bitsuie of Steamboat, Arizona; grandparents, Francis Begay and Irene Meyers of Steamboat.

He attended the Special Navajo Program at Chilocco Indian School at Chilocco, Oklahoma.

Clark retired from the Navajo Nation Water Resources Department after 33 years. He was also a DIY Cleaner in Flagstaff, Arizona. Clark was a rancher, a farmer, he was also a community leader as Crystal Chapter vice president and a life-long member of the Native American Church/Azee’ Bee Naghaha of Diné Nation.