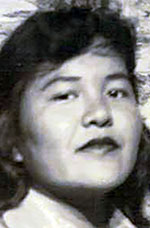 Jennie was devoted to her faith and family as a rancher and homemaker. She enjoyed Westerns and living life to its fullest.

Jennie was a beloved wife, mother, aunt, sister, grandmother, friend, and community member. She was a source of blessing and enriched the lives of those who knew her.

A reception will take place at the Gallup Community Center, following services from 3 p.m. to 6 p.m. 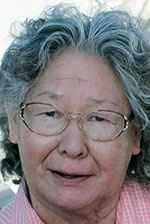 SUNRISE, Ariz. — Graveside service for Amy Florence Denipah, 78, of Ganado, Arizona, was held Tuesday, Oct. 12, at 12 p.m., at the family plot in Sunrise, Arizona. She was laid to rest beside her daughter. Due to COVID-19 restrictions the funeral was open only to immediate family.

Amy, the wife of Vietnam veteran, Franklin Dee Denipah, died comfortably at their home in Mesa, Arizona. She passed peacefully in the care of her grandchildren on Oct. 6, 2021.

Amy was born May 29, 1943, in Ganado, to the union of Virginia and Harold Evans. Harold was a decorated veteran who served in the U.S. military during World War II as a Navajo Code Talker. Virginia was Amy’s lifetime role model. Amy’s parents raised her to understand the importance of the traditional Navajo way.

Amy met her husband, Franklin Dee Denipah, when they were in high school. Franklin was deployed to Vietnam for a four-year deployment and returned to marry Amy on Jan. 15, 1966. Frank and Amy were happily married for 55 years. They had one child, a beautiful daughter, Fenora Ann Denipah-McDowell.

Notable to Amy’s life was to be a dedicated mother, grandmother, and great-grandmother. She was an avid huntress and fisher who enjoyed traveling to many places throughout the United States with her family.

Amy contributed to the Native American Community Workforce. In her life, she worked administrative jobs for the Bureau of Indian affairs, the Salt River Pima Maricopa Indian Community, and the Phoenix Indian Medical Center. Co-workers and friends state that Amy was one of the kindest persons you could ever meet or have the pleasure to work beside.

Amy was a woman of God, devoted to her Christian beliefs and values. She was involved in many church activities and would often congregate with her fellow church members. Over the years, she opened her heart and home to many, and she will be sorely missed.

Amy is a significant loss to her family and friends. The family requests that in lieu of flowers, donations be coordinated through Amylya Brice-Lopez for family expenses.

Advantage Funeral and Cremation Services-Melcher Roses is in charge of arrangements.

BLACKFOOT, Idaho — Shirley J. Martinez, 70, of Blackfoot, Idaho, returned home to her Creator on Oct. 3, 2021, at the Eastern Idaho Regional Medical Center. She was born Dec. 13, 1950, in Rehoboth, New Mexico, to Henry James and Sadie Kee.

Shirley attended boarding school in Crownpoint. The family moved to Blackfoot in 1959 where she attended Groveland Elementary School and graduated from Blackfoot High School. She worked at Idaho Gem for over 13 years where she made lifelong friends.

Shirley met the love of her life, Lupe Martinez, at a birthday party on Aug. 28, 1967. The two were married on Jan. 30, 1969. They built a long life of 52 years together with her focus being on her children and being there for everyone. The biggest blessing in her life was raising her family.

Shirley’s biggest joy was not just visiting her family, but always improving their daily lives and making life easier for all her children and grandchildren. From cooking and cleaning to organizing, to making personalized items for each individual member of the family, she never forgot a birthday and every holiday was a special occasion. Her grandchildren were always on the receiving end of her generosity, which was second to none.

Shirley loved to cook big meals and her specialty was her famous apple pie on Sundays. She always tried to better anything and anyone around her.

Shirley enjoyed traveling to see her family and loved to visit and play at the casino. Family was what mattered most to her and she wanted everything for her children. She never wanted anyone to worry about her. Family always came first. As she would say, “Don’t worry about me and Grandpa, we only care about you guys.”

Shirley is preceded in death by her parents and siblings, Edward, Willie, and Freddie. 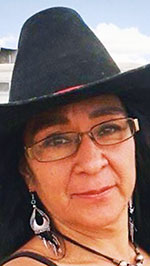 LaTanya attended Toyei Boarding School and graduated from Tuba City High School in 1981. She then attended college in Tempe, Arizona.

LaTanya worked at KFC and was manager at Church’s Chicken. She also worked as a bank teller at Wells Fargo. She loved country music and was an avid reader and writer. She was an accomplished cross-country runner receiving many trophies and awards, including being inducted into the Tuba City Hall of Fame in 2019.

LaTanya is preceded in death by her son, Cornellsen Diaz; and father, Gilbert Diaz Cortez.

Renee enjoyed cooking, traveling, being with family, and was an avid Raiders fan. 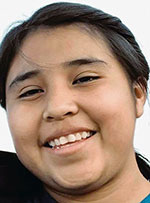 Shaylee was born April 3, 2006, in Fort Defiance, into the Táchii’nii (Red Running Into the Water People Clan), born for Hashtł’ishnii (Mud Clan). She passed away Oct. 7, 2021, at the Ryan House in Phoenix.

Shaylee was just promoted from the 8th grade to the 9th grade, starting her first year at Window Rock High School. She loved to dance, sing, and enjoyed the outdoors by camping, taking walks, running, and hiking. She loved to be around her family and animals. She was so outgoing and made everyone laugh.

Shaylee is preceded in death by her uncles, Marvin Silversmith and James Happy; grandfather, Melvin W. Silversmith; and nalís, Betty and Tom Silversmith, and Lena and Paul Beyal. 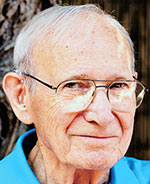 A private service for the immediate family members was held at Sunset Memorial Park.

Chuck worked for Tobe Turpen Trading Post and was the director of Southwest Indian Foundation. He was the proud owner of Shi’Ma Traders since 1988 before he retired in 2008. Many, many people who came in contact with him at Shi’Ma Traders will remember Chuck by his selfless generosity and effortless giving.

Chuck was a devoted husband, a wonderful and loving father to his children, unshakable in his faith and loyal to everything.

Chuck is preceded in death by his son, Alan Neal; and great-grandson Rudy Neal.

Chuck remains a standard of which good men are measured.

Compassion Mortuary was in charge of arrangements. 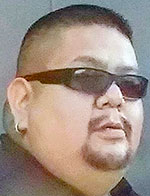 VANDERWAGEN, N.M. — A traditional wake for Lynn Moses Calavaza, 37, of Albuquerque, was held Oct. 12 at the family home in Vanderwagen, New Mexico. Interment followed at the Zuni cemetery in Zuni, New Mexico.

Lynn was employed as a culinary training executive sous chef and ice-carving artist at Culinary Associates. He enjoyed cooking, working, and babysitting his nephew.

Lynn is preceded in death by his grandfather, Lynn Hooee; and great-grandparents, Katherine and Louie P. Eriacho. 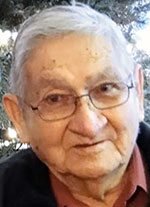 CHINLE — The family of Gene Jackson will be celebrating the life of their father, brother, uncle, grandfather, and great-grandfather who passed on Oct. 9, 2021.

Gene grew up in Jeddito, Arizona, where his brothers and sisters call home. He worked several decades for Navajo Community College (now Diné College) as an automotive instructor. He was awarded an associate’s degree in auto mechanics.

Gene also taught silversmithing at Chinle High School as an artist-in-residence. Additionally, he worked in a Kerr-McGee mine in Grants, New Mexico, for a period of his life.

The hallmark of Gene’s life will be memorialized by his originality and creativity in his works of art. He is remembered for his master-silversmith skills that gained shape and form alongside his wife, Martha Jackson. He created master-level jewelry pieces that were shown at prestigious museums and shows such as the Heard Museum where cultural and artistic themes of the Navajo people are preeminently presented.

Gene also contributed to the advancement of American Indian art through his master-level silver jewelry pieces that were prominently displayed at the annual Santa Fe Indian Market in Santa Fe.

Gene’s life will be affectionately remembered by his contribution towards sustainability of Indian arts and crafts. His silver jewelry pieces will also be remembered in terms of excellence through his attention to detail and innovation.

More importantly, Gene was a U.S. Army veteran who served in the Korean War as a paratrooper. Paratroopers are often used in surprise military attacks to seize strategic objectives such as airfields or bridges. This characteristic of a paratrooper typified his life because he lived a life centered on achieving his objectives.

Gene was married to Martha Jackson, professor emeritus at Diné College, who precedes him.

In the final years of Gene’s life, he lived in Chinle with one of his devoted sons. Above all, he will be most remembered for his devotion and love for the Lord.

The family will be conducting nightly meetings today, Oct. 14, and Friday, Oct. 15, from 6 p.m. to 8 p.m. at the Potter’s House Christian Center in Chinle.

The family will gather to celebrate Gene’s life on Saturday, Oct. 16, at 10 a.m., at the Chinle Potter’s House Christian Center. Burial will follow at the Chinle Veteran’s Memorial Cemetery.

Gene’s life is a true depiction of a mighty man of valor. The Jackson family would like to extend a warm gratitude to all who conveyed their condolences. Special thank you to the Chinle Potter’s House congregation for their support.

GALLUP — Funeral services for June Silversmith-Dixon, 76, of Gallup, will be held today, Oct. 14, at 10 a.m., at the Rollie Mortuary Palm Chapel in Gallup, with Pastor Dennis Thomas officiating. A private burial will follow.

June enjoyed spending time with her husband and grandchildren, and was a huge fan of the Gallup Bengals basketball teams.

A reception will take place at the Gallup Lions Club Hall, following services.