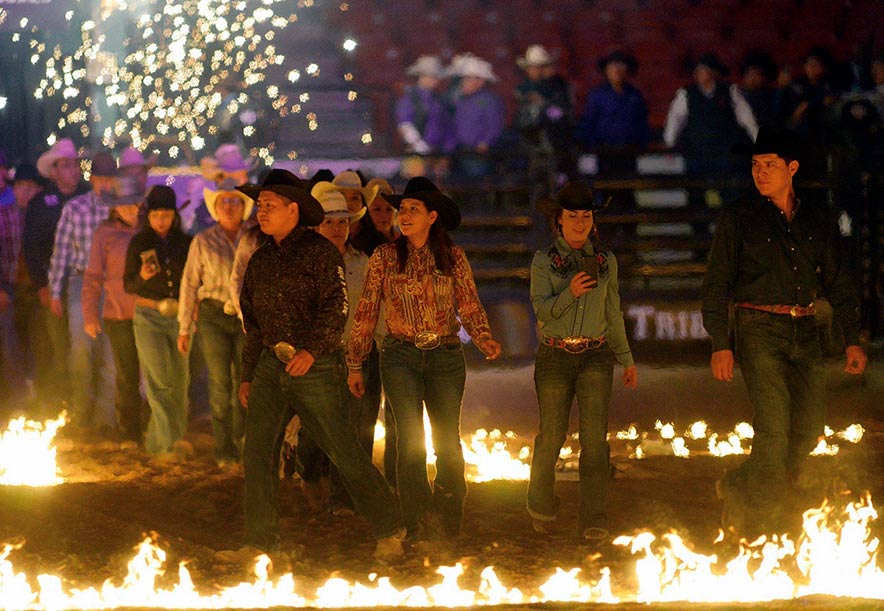 “It’s every Indian cowgirls’ dream to win the INFR,” Seaton said. “I did come close in 2019 but you know my horse has been doing phenomenal this year.

“As long as we can keep those barrels standing I think we got a really good chance,” she said, while noting that she’s claimed a check 90 percent of the time with her prized mare, Gypsy.

“The odds are in our favor and we just have to make sure we keep the barrels up and make some clean runs,” she said.

Seaton will get that chance next week as the 2021 finals is set to begin on Oct. 19 at the South Point Equestrian Center in Las Vegas, Nevada.

The weeklong event will end on Oct. 23 with the INFR world championship round.

Last spring she got qualified for the INFR but the iconic event got pulled due to the challenges created by the ongoing pandemic.

Before the start of the 2021 season, the INFR announced that they were going with a different format in the way they qualify contestants for this year’s finals.

The INFR moved away from its region-based qualification and this year they adopted three different ways to get qualified.

The INFR held several automatic-qualifying events through its tour rodeos as the event champions in those sanctioned events earned their ticket to the finals.

In addition, the top 15 contestants in the INFR Tour Standings earned bids.

Lastly, the INFR is taking the top finishers in the Last Chance Qualifier for both rough stock and timed events.

The rough stock qualifier was held on Oct. 3 in New Town, South Dakota, and the top four contestants in that event will be in Las Vegas.

The timed event last chance qualification will take place this week at Horseman’s Park in Las Vegas with the top nine contestants earning a ticket to the finals.

Seaton made the INFR through the automatic-qualifying concept as she won the first INFR tour rodeo in Riverton, Wyoming.

“It was really nice that I already had my seat when I won the first tour rodeo,” she said. “From there I was just basically chasing money, and we did good at all the tour rodeos we entered with the exception of the Oklahoma rodeo.”

Seaton said the automatic-qualifying concept was beneficial as it allowed her to concentrate on her prorodeo ambitions for the month of September.

“I had to make a decision and I went with prorodeo instead because I want to have a good seat for the Turquoise Circuit Finals,” she said.

With that decision, Seaton dropped to second in the tour standings after leading the barrel racing event until the final rodeo of the season.

She was not the only one to take advantage of the automatic qualifier as college students Dean Holyan and Stade Riggs use that to make the INFR.

“It did benefit me because I had a lot going on with prorodeos, open rodeos and college rodeos,” said Holyan, a first-year student at Cisco College in Texas. “It really helped me to go to a handful of them and get it done.”

This will be Holyan’s 10th INFR qualification, having earned eight in the junior ranks, which includes three world titles in the junior breakaway.

The Coyote Canyon, New Mexico, cowboy got qualified in the tie-down event by winning the Muscogee Rodeo in Oklahoma with a 7.5 effort.

That triumph earned him his second qualification in that event. In 2019, he placed fourth among a veteran field.

“It was everything that I’ve dreamed of,” Holyan said of his experience. “I moved onto the next level and it was tough competition but that is the whole reason why the INFR has that junior division.

“It builds you up, and it builds your confidence and it gets you ready for that next level,” he said. “So it wasn’t much of a difference. I was ready and prepared to be in the open.”

Holyan said he’s feeling confident about contending for a world title, and adding to the family lore.

“That’s the whole reason why I go, which is to win titles,” he said.

Riggs, a Northern Arizona junior, won the automatic qualifier at the Parshall, North Dakota, rodeo with a winning score of 76 points.

“I was up in the final performance and I just drew a nice paint horse from Broken Arrow Rodeo,” Riggs said. “I just took advantage with the horse that I had.”

Like Holyan, Riggs said getting qualified early on allowed him to concentrate on school as well as the college rodeo season.

“I only entered one more rodeo after I won the instant qualifier,” he said.

Riggs is headed to Las Vegas in his first year as an INFR contestant.

“This is my first year buying my card for the INFR,” Riggs said, while noting that he bought his card at the urging of friends and his family members.

“I got talked into it,” he said. After some convincing, “I decided to try it out.”

Riggs said he’s going to “take it one horse at a time” at the INFR.

“I’m just going to take it all in and just enjoy myself,” he said. “It should be a lot of fun and I’m looking forward to the great stocks the contestants have picked.”

In the tour standings, Riggs finished seventh overall behind a bevy of veterans, including 2017 INFR world champ Jay Joaquin.

“I ended up as the tour champion,” Joaquin said of his exploits this year.

Of the 15 rodeos, the Sacaton, Arizona, cowboy earned a check at 10 of them. He was crowned champion at the Crow Native Days and the Crow Fair in separate months.

“I had a good season but there’s gonna be a lot of pressure going in, especially coming off a tour win,” Joaquin said. “A lot of people are going to be expecting a lot not just from me but for every tour champion.

“I’m just gonna try my best to bring another title back to Arizona,” he added.