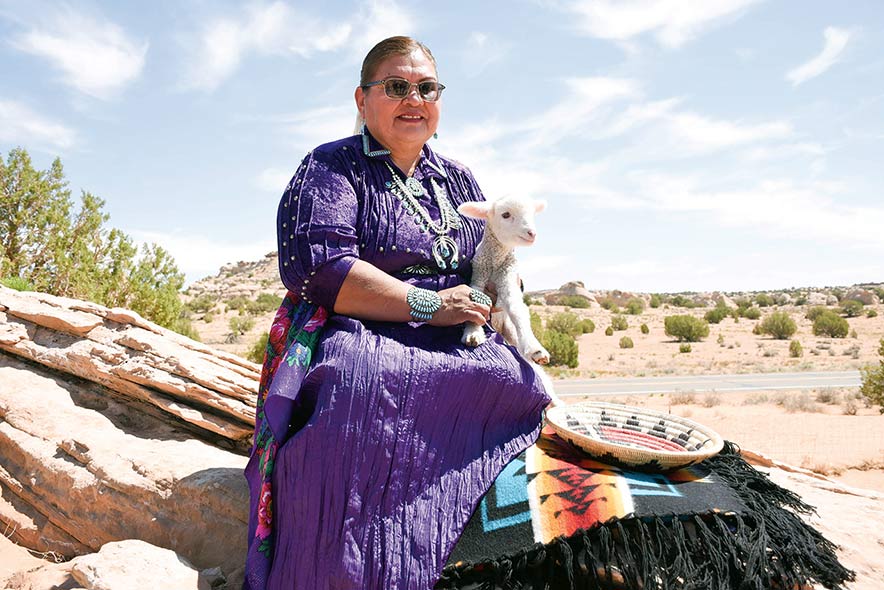 Jesse bleated as they washed its coat with blue Dawn dishwashing liquid on a Sunday morning.

Jesse, a lamb, needed to be clean for a photoshoot on the ranch 14 miles west of K’ai’bii’tó. Its mother had rejected it shortly after birth.

In that case, Jesse could get a chance to travel with Helena and her family to Tsébigháhoodzání for inauguration in January 2023.

She said Diné have strayed from the concept that Navajo Nation leaders work for the people and that today’s leaders aren’t doing their work and instead play-acting – some appealing to the crowd more convincingly than others.

“I’ve seen a lot of issues going on with our elders, adults, youth,” Helena Begay said. “I’ve heard their concerns over the years because I am out among them, hearing their needs that were never addressed.” 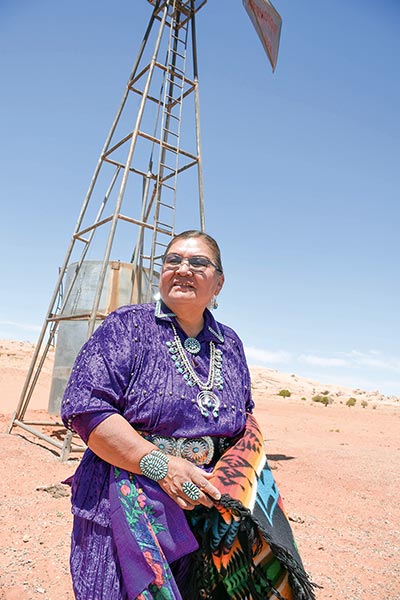 Navajo Times | Krista Allen
Helena Nez Begay walks across the land at the Aermotor windmill where she grew up. Begay, the supervisor at the Kaibeto Senior Center, is running against Delegate Paul Begay Jr.

Begay, who has 19 years of leadership experience, said she’s mindful of the people who have to ask their chapter officials and staff for help and instead get pushed to the side.

“We need to go out into the community and talk with them, visit them at their homes,” she said. “That’s the only way you’re going to find out what the needs of our communities are.”

Begay’s calm courage and a proven track record as a community leader – and a Diné woman who can meet goals, solve problems, and make decisions – are what her people in District 1 want, said her supporters on Sunday night during a meet-and-greet outside Kaibeto Store.

Her supporters said the breadth of her experience and commitment to people living in rural areas translate to effective leadership to confront the challenges many face.

“I’ve been addressing these issues for years and years,” Helena Begay said. “I need to be the voice for me and the people I live with here in the rural areas, where water is needed.”

Her partner is Benjamin Yazzie of White Clay, Arizona, just east of Tóniłts’ílí.

Harness to the wind

Less than 10 miles southeast from here, a preserved Aermotor windmill stands guard over the lands that made her.

The windmill and lone water trough at the site, amid ch’il hard to find, are a testament to the perseverance of Begay’s family.

“I grew up with this windmill,” she said, walking on the land in her kélchí. “My grandpa, (Tábąąhá Ha’diłch’ałi), used to have an (8-cycle gasoline engine water pump), and he’d sit over at the windmill, and the water would run.

“We used to haul water home (for consumption), bathing, cooking, and watering the cornfield and the livestock,” she said t’áá Dinék’ehjígo. “Windmills mean iiná, and our livelihoods depend on the water, and that’s what windmills mean to us out here.”

The windmill she grew up with was a beacon that guided her home when she herded sheep when she was younger.

“The sheep know the windmill, and they know they’re going to get water there, and they start running,” she said. “It’s something I grew up with.

“We – my siblings and I – used to pull a wagon of laundry to handwash at the windmill, and when someone pulled up to the area, we’d run behind the water tank,” she said.

“This (windmills) are what we used to use before showers and bathtubs came around,” she said.

Begay grew up here in the 1970s when Bechtel Corporation and Morrison-Knudsen began constructing the Navajo Generating Station and the Black Mesa and Lake Powell Railroad, respectively.

“That’s the reason our children moved away from here,” she said. “How did that happen? It’s because we didn’t consult together, and it shouldn’t have happened, but it did.”

One day the late Tábąąhá Ha’diłch’ałi sat his young granddaughter down and said to her, “Shiyázhí, she’awéé’, shinálí, go to school and when you get there, finish it, and then return home. We’ll get a vehicle and travel.”

“They (elders) had dreams like that for us,” Begay said. “My grandfather passed on in 1979 when I finished eighth grade, and that dream never came a reality – to get a vehicle for my grandparents.

“But the dream was to go to school and get an education,” she said. “I remember going to preschool at LeChee Chapter, where my education started. Then I was placed at Kaibeto Boarding School, where a lot of things changed.”

Begay said she didn’t speak English when she started boarding school, where a Black teacher often deprecated her speaking the Diné language.

The penalty for doing so was washing her mouth with a slice of soap.

“After many bars of soap, I learned the English language,” she recalled. “And that’s what I emphasize to my children: go to school.”

“My children, my only audience, were there when I walked across the stage to receive my diploma,” she recalled. “They cheered for me, saying, ‘Go, mom!’

Her daughters graduated from Arizona State University, earning bachelor’s and master’s degrees. Her sons are electricians.

“Being there for your children makes a big difference,” Begay said. “Supporting them and cheering them on, and that’s how my grandparents raised me.”

She said she’d like her people to know if they need a listening ear and someone to talk to, she’ll be there to listen and talk.

“That’s my job as a supervisor,” Begay said. “I try every way to assist not only Kaibeto but also other areas and communities.”

She adds that she, along with her staff and the entire Division of Aging and Long-Term Care Support team, served on the front line of a daunting public-health challenge, testing her abilities to get things done as COVID-19 spread fear, disease, and death.

“We went above and beyond for our communities,” Begay said. “I feel that the people asked me to run for Council and said, ‘Run and help us. You already know this job, and you already know how to work with us.’

“I’m going to be here for my people and the communities to come up with solutions,” she added. “That’s why I threw my hat in.”

Begay said the No. 1 concern in Western Navajo is water, and it’s a deepening crisis as Lake Powell is an overdrawn bucket.

The 20-year-long drought has left growers and communities short of water.

“They try to ask for things (at the chapter), but nothing’s really coming out of it,” she said. “We need to be there for the young people and help them develop for the future. They’re the leaders of tomorrow.”

The second concern is education, said Begay, who’d like to start a scholarship fund for high school students who want to further their education and join the military.

“We need to have that reinforcement for our children,” she said. “We need to be that support, and it comes back down to the local chapters. We need to work together and iron things out.

“That’s my No. 1 priority: to work with the chapters and their staff and positively work on these issues.”

A third concern is elder rights/aging and health.

“If we want to keep grandma and grandpa at home, we need to come up with a resource where they can fall back on when they get older so they can be taken care of than placement at a nursing home elsewhere,” Begay said. “These are some of the issues I’ve seen throughout the years.”

She said other problems are the tribal budget and the tribe’s dangerously low pay raise.

Begay believes the tribe proves stingy with pay raises to its employees. She said employees hadn’t had a raise in over two years working under the Division of Aging and Long-Term Care Support.

“As a Navajo Nation employee, I want to be the voice for my colleagues,” Begay added. “I want to address these issues.”