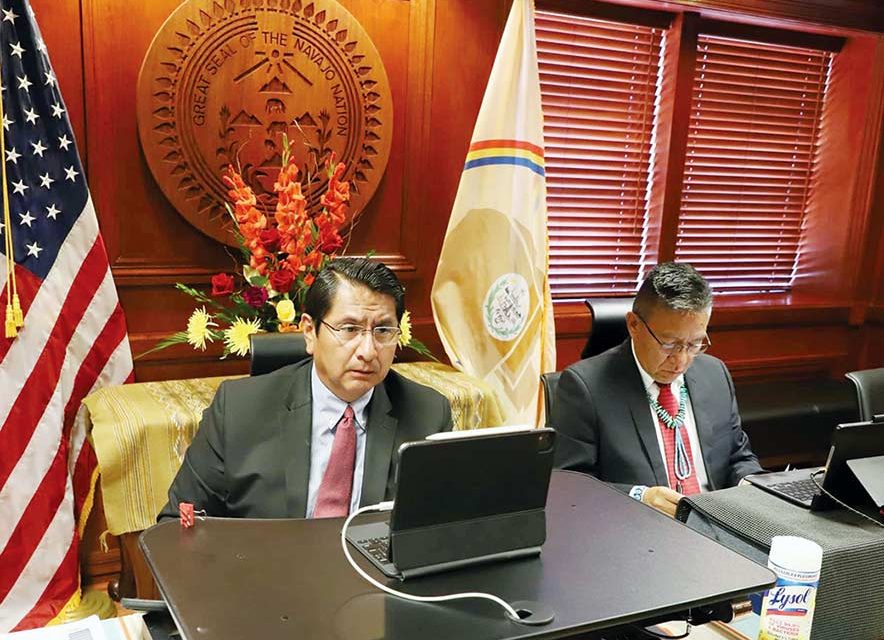 Courtesy photo | President’s office
On Monday President Jonathan Nez and Vice President Myron Lizer present their state of the nation from the president's office on the first day of the Navajo Nation Council's summer session.

In his state of the nation address on Monday, President Jonathan Nez began by touting the success of his administration’s COVID-19 response and the Navajo Nation Council’s June 30 OK of the spending plan for more than $1 billion dollars in American Rescue Plan Act projects.

In his speech to the Navajo Nation Council’s summer session on Monday, Nez said the ARPA allocations will build on the success of the 2020 CARES Act projects and provide jobs and help build the Nation for future generations.

“This was a well-thought-out plan that was developed by technical experts and division directors based on many meetings with input from the community level and many work sessions held by the Council,” said Nez.

Nez said that while the $1 billion is not enough to satisfy the estimated $20 billion of infrastructure needs on the Nation, the spending plan serves as a starting point.

“Elders, youth, veterans, students, families, and many others will benefit from the ARPA funds,” he said.

COVID-19 mitigation remains a top priority, said Nez, and his administration continues to work closely with public health experts to caution the public that the virus is still out there and to reaffirm that the vaccines are safe and effective.

“As we move forward in this pandemic, we commend our elders who have the highest vaccination rate among all age categories at 90 percent,” he said.

The Navajo Nation remains in “yellow status” with “moderate-low” restrictions and 58 chapters seeing “uncontrolled” spread of the virus.

Funding for veterans not reduced

Nez noted the many Navajo veterans who gathered and marched to the Council Chamber Monday morning to advocate for veteran’s issues, including funding and services.

Nez said, “…we respect their concerns, but we also want to take this opportunity to highlight the progress that is being made.”

He said his administration is working to “fix” policy issues related to veterans’ benefits, housing and other priorities.

“When it comes to the budget for the upcoming 2023 fiscal year, let us be clear, there will be no shortfall or decreases in funding for Navajo veterans,” said Nez. “The budget will include funding for veterans’ benefits, services and housing.”

Nez explained that Title 12 needs to be amended to clarify how the annual funds are distributed from the Veterans Trust Fund. That will require approval from the Council through legislation being prepared by the Navajo Veterans Administration.

He also said the Nation is the first tribe in the country to receive federal recognition and accreditation from the U.S. secretary for veterans’ affairs, which means for the first time the Nation can prepare and process Navajo veterans benefits claims.

Nez also touted the passage of a bill sponsored by Delegate Carl Slater, on May 9, which appropriated $29.2 million to construct and operate a 60-bed nursing home in Chinle for veterans called the “Navajo Warriors Home.”

Regarding Navajo elders, Nez said the Navajo Department of Health has a $30 million proposal to improve senior centers across the Navajo Nation.

“When the COVID-19 pandemic began, government services were interrupted and that included senior centers – our top priority is to save lives,” he said.

“Now that we are in a better state and have vaccines that help us to push back on the virus,” he said, “we are prepared” to introduce the $30 million plan.

He also urged the delegates to use ARPA funds for each of the 24 delegates’ regions to improve regional senior centers.

Through the ARPA spending bill, each delegate is allocated $8.8 million for projects in coordination with their chapters, which can include senior centers and other local priorities.

Nez congratulated the 10 men and women who completed the Navajo Police Training Academy program and said the Proactive Criminal Enforcement Program, which was recently created, is successful.

The president’s office also authorized the allocation of an additional $500,000 to the Navajo Police Department to support drug enforcement efforts and other public safety operations.

Nez said that in the proposed budget, an additional $1 million is included for PACE and the new Missing Persons Unit.

“We will also seek the Council’s support for an additional $250,000 for victims’ advocates to provide support for the families of missing persons,” said Nez.

First lady Phefelia Nez and second lady Dottie Lizer are working with the Division of Public Safety, Department of Health, Division of Social Services, prosecutor’s office, Department of Emergency Management and others to finalize a Tribal Community Response Plan, a component of the Diné Action Plan, he said.

The plan is intended to guide the Nation and its partners in efforts to build support for missing persons and their loved ones.

Nez commended the Council for recently approving $4 million for youth employment to hire student workers in all 110 chapters throughout the year.

He said through this program, youth employment workers can give back to their communities, learn valuable skills, and earn funds to help them with rent or essential supplies.

Nez also noted the recent completion of Navajo Route 12 in Tsaile/Wheatfields and ongoing road construction in the Mariano Lake area, including NR11.

While federal guidelines from the U.S. Treasury do not allow for road projects to be funded under ARPA, Nez said the Navajo Division of Transportation and Navajo Nation Washington Office are looking for opportunities within the Biden Infrastructure Law signed last October.

“There are plenty of infrastructure funding opportunities and our administration is aggressively working with our federal partners to secure additional funds,” said Nez.

Last but not least, Nez said the two-year extension of the Radiation Exposure Compensation Act by Congress is short-term victory to be celebrated.

Council accepted the state of the nation with a vote of 20-1.