Western voters weigh in on Nez 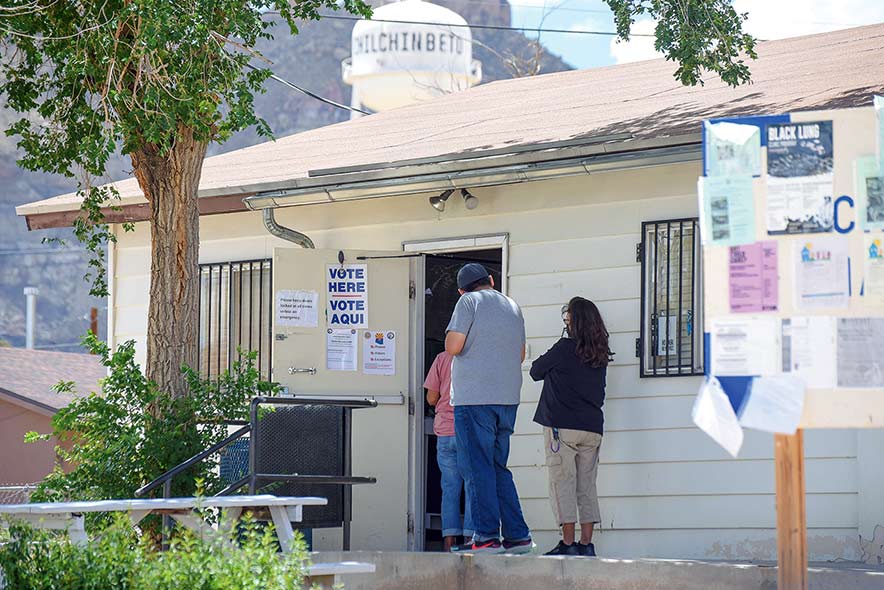 Navajo Times | Krista Allen
Voters wait in line to cast their ballots at the polls inside Chilchinbeto Chapter on Tuesday afternoon.

Some voters across Western Navajo say they disapprove of the way Jonathan Nez is handling his job as president and were seeking someone different for the position.

And those voters say they bear no ill will toward Nez but would like a new face to lead the tribe.

Iverna Parrish-John, who ran for Council to represent Chiiłchinbii’tó, Dennehotso, and Tódinéeshzhee’, said she desires a path forward and change across Diné Bikéyah as the challenges facing it mount.

“My hopes are high,” said Parrish-John, who is Nát’oh Dine’é Bitáá’chii’nii (Táchii’nii) and was born for Tódích’íi’nii. “We need to all communicate together, and we need to be respectful of one another.

“Even though we have problems right now, we gotta go forward and put the difference to the side,” she said. “Our people are the ones who are crying for help. So, we have to take off our (professional) titles and think for our people.

Parrish-John added that the Navajo Nation needs to return to hózhǫ and become a humble Nation, setting an example for other tribes in the country.

“We have to be the voice for the Indigenous tribes in the U.S.,” she said.

U.S. Army veteran Peter Hewey from Chiiłchinbii’tó said he, along with fellow military veterans in the tribe, would like to see a new president committed to ensuring all veterans receive the care and support they need from the tribal government.

“We need improvement on the veterans’ program, such as housing,” said Hewey, who served in Vietnam. “Right now, the legislators in Window Rock are throwing it back and forth.

“They don’t know what to do,” he said, “and want to get rid of the executive director (James D. Zwierlein), but he’s doing a good job. With a Navajo in that position, they last only a year.

“A lot of people don’t like him, but he’s cleaning house,” he said. “For us out here in Chilchinbeto, we’re remote but active in our (veterans) organization.”

Hewey said if Buu Van Nygren wins the general election, he would like to see his support for a convenience store and a multipurpose building for Chiiłchinbii’tó.

“This would become a reality,” Hewey added.

Some voters say they approve of Nez and aren’t ready to leave him behind.

Lula Seaton, a 77-year-old Gold Star mother from Tódinéeshzhee’, said Nez’s achievements in office have made him a transformative president, leading the Nation through the coronavirus pandemic.

She said she had only one child, and she’s still in mourning. Now she’s struggling with the disruptions of life, such as health and housing issues.

“But Nez helps our people,” she said in Navajo. “I voted for him, and he’s a great president. He has the education to lead our Nation and is a hard-working leader.”

Seaton added that she also voted for Parrish-John.

Leah Stevens, a young voter from Musi, Utah, said she listened to Nez and Nygren during their campaigns and finally decided between the two candidates.

“Nygren is kind of the same, so they’re for the same goal,” she said. “There are a lot of changes they want to do in the Utah Navajo area.”

Delegate Herman Daniels Jr. said the Nez-Lizer administration has a good partnership with the legislative branch of the government.

“We have a good communication with (Nez), and that’s how we approved the ARPA (American Rescue Plan Act) funds, and the executive branch created the legislation,” said Daniels, who represents NÁÁS chapters Naatsis’áán, Ooljéé’tó-Tsébii’ndzisgaii, Shą́ą́’tóhí, and Ts’ahbiikin.

“So, we have a working relationship with the executive branch,” he added. “(Nez) is a good president.”

Jimmy Yazzie of Halchita, Utah, said he agrees with those that say Nez is an excellent president and networks with influencers and influential leaders in Washington, D.C.

“And it makes a lot of difference,” Yazzie said. “If they don’t know you in (Washington, D.C.), you’re an outsider.”