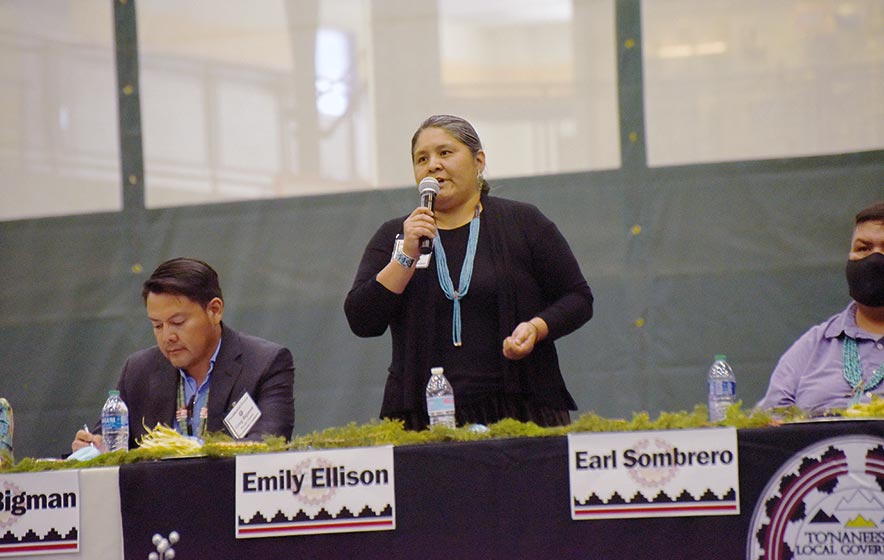 Navajo Times | Krista Allen
Candidate Emily Ellison introduces herself and presents her platform during the presidential forum inside the Warrior Pavilion in Tónaneesdizí on Tuesday night.

The seven female candidates for president are dominating the forums across Diné Bikéyah. Yet Diné are still being asked if a woman can be elected president.

The five female candidates onstage at the Warriors Pavilion Tuesday night left little doubt that a woman could win. They spoke, on average, more than their six male rivals in attendance.

“It’s going to take a woman to do this job better,” the Tsédildǫ́’ii resident said, “because for so long, we have been putting men in there – over and over. It’s as if we’re stuck in one position.”

Some voters suggest they’re eager to see a woman on the ticket but fear that putting her in the top seat could cost Diné Bikéyah.

Like her fellow candidates, Manson says she’s running for president to move toward meaningful, lasting change.

In ways subtle and overt, a handful of female candidates say they keep hearing the same question, “Do you think a woman could be elected president?”

A few of the female candidates say some people whisper it, some apologize for it, and some are very careful to mention women who are exercising power in unprecedented ways, such as Vice President Kamala Harris, said T’iists’óózí candidate Sandra D. Jeff on Wednesday morning.

“They point out how we now have women who are governors and … our first vice president,” said Jeff, who didn’t attend the Tónaneesdizí forum.

The forum wasn’t exactly a debate nor was it chaotic because the Tónaneesdizí officials asked the candidates to be civil, pressing for “hazhó’ógo.”

Even though one candidate shouted and expressed incoherent crosstalk, it was a nearly five-hour sedate event.

In the first segment, a more structured and linear exchange of views, the candidates were given 10 minutes to introduce themselves and their platforms.

With less than two weeks until Primary Election Day on Aug. 2, the candidates laid out starkly different visions of Diné Bikéyah.

Council of Naat’aanii member Angie Williams was the moderator. 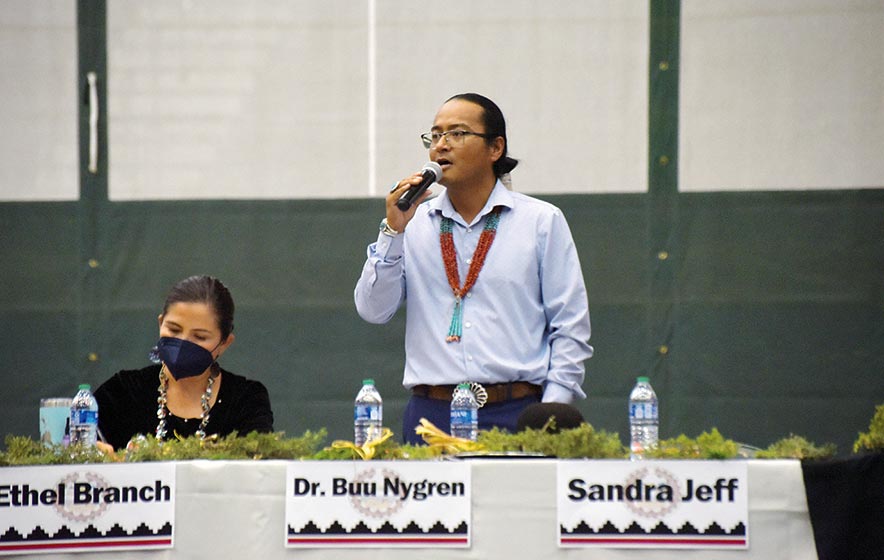 Navajo Times | Krista Allen
Candidate Buu Van Nygren introduces himself and presents his platform during the presidential forum inside the Warrior Pavilion in Tónaneesdizí on Tuesday night.

“I’m thinking of our Navajo Nation and its issues,” Nygren said t’áá Dinék’ehjígo, vowing to do what he can if he becomes the Navajo Nation president. “Many of our people don’t have running water and sanitation in their homes.”

The 35-year-old said he’d work with the chapters and their leaders on varied issues such as housing, water, education, home-site lease/grazing permits, Hopi Partitioned Lands, and the Former Bennett Freeze Area.

“These issues will get solved only if we work together,” Nygren said. “(My) campaign is about figuring out the basic challenges of our communities. There are a lot of people who still need quality access to housing.

“The other thing is really trying to develop programs for our youth,” he said. “Our youth need social services and places to go. Why aren’t there centers here in the Navajo Nation?

“Everything starts from the home,” he said. “In order to address some of the harsh conditions of Navajoland, we have to generate revenue.”

Candidate Emily Ellison, who’s Naakaii Dine’é, born for Haltsooí, said there’s a lot of work to do for every Diné still in need of a good job or a raise.

“There’s so much out there in the world that we can learn,” said Ellison of Kin Hózhónii and Na’nízhoozhí.

She said one of the important issues is land and it’s a crisis no matter which way it’s sliced.

“We talk about fundamental rights, customary law, natural – and it’s not expressed in our Navajo Nation Code,” Ellison said. “We talk about economic development, but the model that creates (it) is about individual ownership.

“So, when we talk about economy,” she said, “we have to figure out where we’re going to open. And the way that I see it is going through our CLUP (community land-use planning) committees.

“A lot of chapters have land set aside … designed to meet our community needs,” she said.

Another important issue is Diné Bizaad.

“I hear people saying this young generation, they don’t want to speak our language, they’re ashamed, but then you look at their families,” Ellison said. “They’re not speaking to them properly. There’s been a lot of traumas and (they) started in 1868 (at the internment camp at Hwéeldi).

“Our kids are a little bit more sensitive, and we’ve got to respect that,” she said. “But how do we respect that if we’re not even healed?

“So, when we need to understand that our Navajo Nation government and the leadership of the past have failed our younger generation in giving them the resources to master the language,” she said.

She asked why Diné Bizaad isn’t the official language of the Navajo Nation.

“If you’re not ashamed of it, call your leaders and make it happen,” Ellison added. “Other than that, it’s just words.”

Ethel B. Branch, who’s Bįįh Bitoodnii, born for Naakaii Dine’é, said the Navajo Nation can do great things and accomplish great things under her leadership.

“We need to tackle the economic development issue in our communities,” the Kinłání-Dook’o’oosłííd resident said. “If our families are able to earn a good living, they can put food on the table for our children.

“Our children can (go) to school ready to learn (and) parents can remain in the community with their children,” she said, “raising them and giving them the support that they need.”

Branch, former attorney general for the Nation and public finance attorney who helped bring four public safety facilities to the Nation, said keeping families is important to her and economic development is key.

“I’ve seen the power public finance can do and that’s how other governments finance large public projects and we’ve not taken full advantage of our ability to finance those types of projects,” Branch said.

She said as president, she intends to use her Harvard education and tools to pave roads.

“We need to bring parody and equality, and we need equal access to resources,” Branch said. “We are also Americans, and we should have that same level of access as anybody else, (such as) access to running water and electricity.”

Sombrero said, for example, making rugs and raising livestock teaches lessons in ethics and responsibility, and the meaning of t’áá hwó ajít’éego.

“You all need to understand that (beehaz’áanii),” Sombrero said t’áá Dinék’ehjígo. “We do not understand. We have no realization, the suffering that took place in the laws that they (lawmakers) created for our government as Diné.

“Instead, we’re becoming white people,” he said. “And we’re not realizing it. It’s ashamed that many of us don’t know our language and our children aren’t speaking it.

“Those of us who don’t speak our language – it’s a choice,” he said. “It’s a choice that you, individually, make to speak your language.

“It’s not up to your leaders, your parents and grandparents,” he said. “And that’s what I stand for. You are the governing body of the Navajo Nation.”

Bigman said his agenda is about putting people first seeing the disparities from Tsébigháhoodzání to the chapters.

“I’ve seen the disparities that goes bigger than the wage gaps, seeing how the people struggle,” Bigman said. “It’s not the chapters’ fault, it’s because of all the bottlenecks that exist. That’s where my plan was formed.

“When I think about our Navajo people, they get criticized and they say, ‘You can’t do it.’ But as your naat’áanii, I want to say I believe in you,” he said. “That’s what’s putting people first is about.”

He added that “putting people first” means getting resources and the authority at the grassroots level because that’s where it matters.

“It’s about decentralizing our government, so that way local government is empowered with the authority,” he said. “Disparity is widening between chapters and central government.”