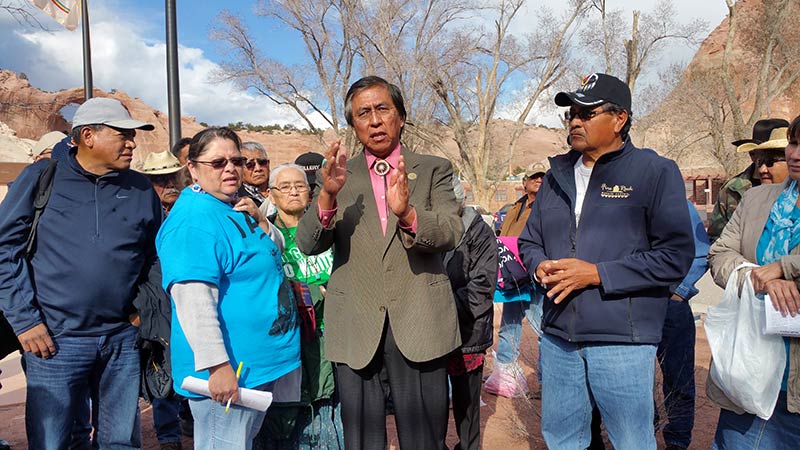 After hours of debate on the Navajo Nation Council floor a legislation asking for a supplemental appropriation request in the amount of $317,897 for the special election was passed by the tribal council with a vote of 19-1, but with an added referendum on fluency.

The money approved in the legislation would first be appropriated for the referendum that is asking the Navajo voters to change tribal law by amending the fluency requirement for the offices of Navajo Nation President and Vice-President.

“This was a wonderful debate. These are tough issues,” Tsosie said after his amendment’s passage, adding that he hopes the Navajo Nation Supreme Court doesn’t strike it down. 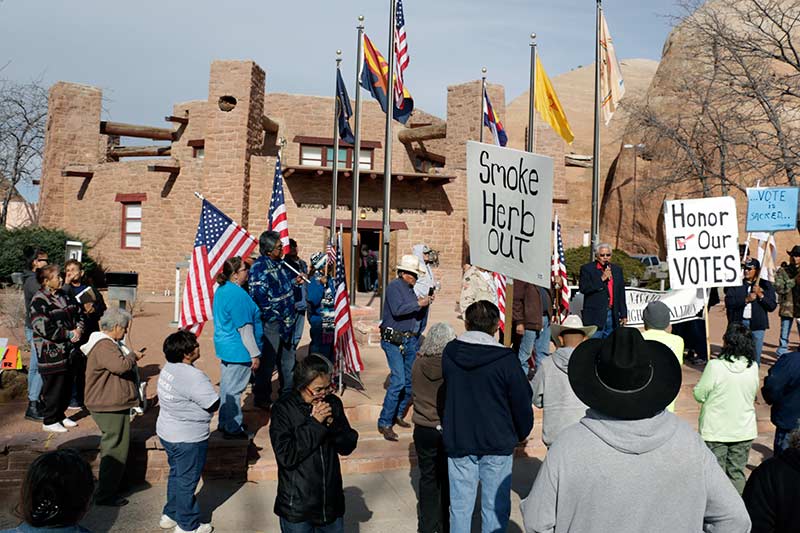 Protestors from Navajo Voter’s Coalition Incorporated stand outside the council chambers with their signs before the start of the 23rd Navajo Nation Council’s special session Friday in Window Rock. (Times photo – Stacy Thacker)

At the end of the Friday’s tribal council activities, the 2015 Navajo Nation General Election and Presidential Election were still scheduled to be held Tuesday, April 21.

The Navajo Nation Council delegates spent a few hours debating on whether Tsosie’s amendment should be added before coming to a final decision.

“We are not changing any law. We’re referring the question to the Navajo people,” Tsosie said in defense of his amendment when challenged by Council Delegate Alton Joe Shepherd (Jeddito/Cornfields/Ganado/Steamboat/Kin Dah Lichii).

Shepherd argued that Tsosie’s amendment to the legislation changes the intent of it, meaning that the proposed language doesn’t directly address the funding of the election.

“We’re changing the intent of the supplemental and the intent of positive law,” Shepherd said, who cited provisions of the council’s rules of order that said the bill was out of order.

In response to Shepherd, Tsosie noted that his amendment essentially refers the question of fluency to the Navajo people, just like the Supreme Court said in its orders and the veto messages by Navajo Nation President Ben Shelly that said the Navajo
people need to decide the fluency issue.

“To me this is an order, it’s regarding an appropriation of an election matter,” Tsosie argued.

The debate between the two legislators then resulted in Speaker LoRenzo Bates ruling that Tsosie’s proposed amendment was out of order. Bates’ decision then resulted in Tsosie challenging it, with a motion seconded by Council Delegate Edmund Yazzie (Smith Lake/Iyanbito/Mariano Lake/Pinedale/Thoreau/Church Rock).

On the challenge, the council voted 12-8 in favor thereby overturning Bates’ decision.

With Tsosie’s challenge succeeding, he continued advocating among his colleagues why they should vote in favor of his amendment.
“It really bothers me that we want to shut down the Navajo people,” he added, noting that he feels “the best decision we can make is with the Navajo people. They will guide us on where to go.” 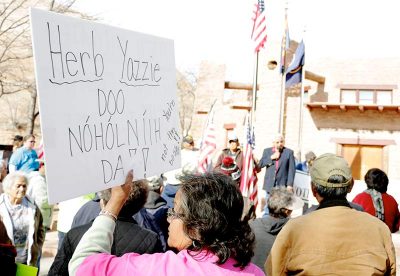 A protester from Navajo Voter’s Coalition Incorporated stand outside the council chambers with a sign that reads “Herb Yazzie you’re not the boss,” before the start of the 23rd Navajo Nation Council’s special session Friday in Window Rock. (Times photo – Stacy Thacker)

Council Delegate Edmund Yazzie was in support of Tsosie’s amendment saying that it is giving the Navajo people “a chance to correct this problem that has tried to be resolved by the council, the chief justice and by the president of the Navajo Nation. Let’s
give them a chance to share their voice.”

Council Delegate Dwight Witherspoon (Forest Lake/Black Mesa/Hardrock/Whippoorwill/Pinon), sponsor of the election funding legislation, also voiced his concern, but for Tsosie’s amendment. He said that there was not enough time for a referendum, given that there is a little over 30 days before the election – April 21.

“My concern is that if you don’t add any additional funding, you’re only funding the referendum by your proposed amendment,” Witherspoon said.

Witherspoon added that the amendment — or the proposed referendum — would change the funding request for the election.

In response to their inquiries, Wauneka said the election will happen regardless of the council’s decision on the bill, because his office would get funding for the election ballots through operational funding from the three branches of government.

Operational funding is extra money in the branches’ budgets. Officials would bring the funds together to fund the election.

“That is the only alternative we will have,” Wauneka added.

As of Friday evening, the 2015 Navajo Nation general election is still scheduled to be held on Tuesday, April 21.