Deschene case goes back to office of hearings and appeals 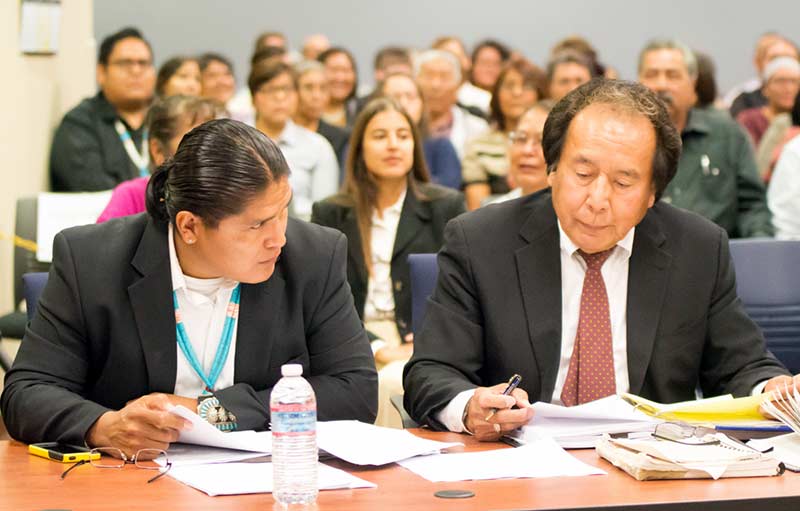 ABOVE: Navajo Nation presidential candidate Chris Deschene, left, preparers for his oral arguments with his attorney Samuel Pete on Friday in Tuba City. Former Navajo Nation presidential candidates Dale Tsosie and Hank Whitethorne filed a motion to disqualify Deschene because he is not fluent in the Navajo language. (Times photo – Donovan Quintero)

Dozens of people stood in line Friday morning at the Tuba City Judicial District to hear oral arguments regarding whether Christopher Clark Deschene should be disqualified from being a candidate for the office of the Navajo Nation President because he does not speak fluent Diné Bizaad.

Former Presidential Candidate Dale Edison Tsosie from LeChee, Ariz. on Sept. 5 filed a sworn challenge in the Office of Hearings and Appeals alleging that Deschene, also from LeChee, is not qualified for running for office because “he cannot speak the language fluently.”

Both actions were dismissed by OHA.

“People say Chris lied, but he told people that he was learning the language,” said Cameron Chapter President Milton Tso. “People still voted and that was the people’s choice.”

The court on Friday afternoon found that the qualification for “fluency” is a reasonable regulation to a candidate’s right to political liberty.

Kelley, who waited outside the judicial court for the decision, says Deschene not knowing his language is “nothing” because learning it well enough is possible.

The court also clarified the election law by providing a definition of being fluent in Navajo. The court then instructed OHA to apply that law in the next hearing to determine if Deschene meets the requirement.

The basis for the court’s decision is based on Diné Beenahaz’áanii (Navajo law).