Votes recounted in some chapters 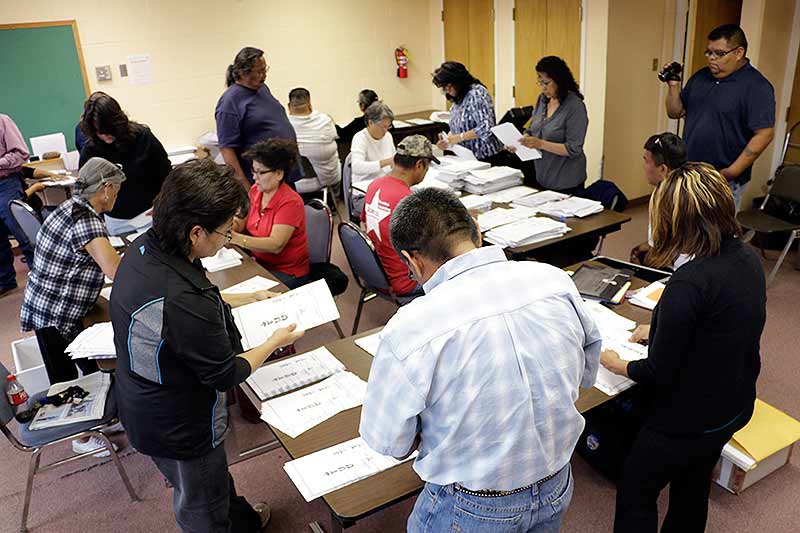 Ballots are recounted in the conference room of the Election Administration Office on Thursday. The recount was prompted by the Shirley campaign. (Times photo-Stacy Thacker)

Votes in certain chapters were manually recounted Thursday at the request of minions of the Joe Shirley, Jr. and Dineh Benally campaign.

Leading them was campaign manager Patrick Sandoval, who requested the recount via an April 22 memorandum. Sandoval asked Edison Wauneka, executive director for the Navajo Election Administration, to manually recount the votes in 10 chapters after Shirley lost the Navajo Nation presidential race to Russell Begaye.

According to unofficial results, Begaye won Shiprock with 1,264 votes to Shirley’s 442. 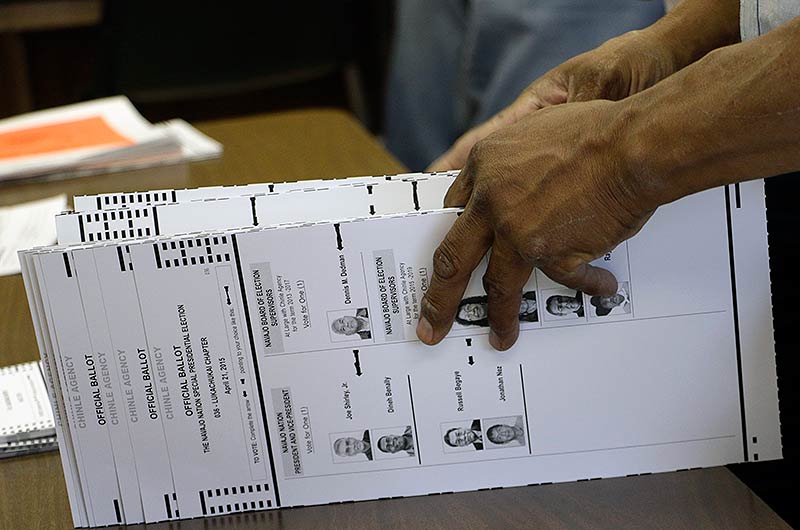 Ballots are recounted in the conference room of the Election Administration Office on Thursday. The recount was prompted by the Shirley administration. (Times photo-Stacy Thacker)

Crownpoint voters selected Begaye with 188 votes, with Shirley getting 149. In LeChee, Begaye got 83, while Shirley received 25.

Begaye won Leupp Chapter with 310 votes, and Shirley got 69 votes.  In Lukachukai, voters favored Shirley with 230 votes to Begaye who won 220.

In Nahata Dziil, Begaye won the majority with 242 votes and Shirley got 78.

The voting numbers that favored Navajo Nation President-Elect Russell Begaye and Vice President-Elect Jonathan Nez surprised Sandoval because Shirley-Benally had carried those chapters in the primary.

Besides the primary outcome, the campaign manager said Shirley had carried these chapters in the past and also had endorsements from those regions.

“It’s such a huge despairing number,” he added. “Maybe the numbers, the system has a flaw in it.”

Everything including the machines and codes of the ballots are being examined, Sandoval said.

So far, Sandoval said, he’s seeing “a lot of interesting stuff” from the manual recount.

Along with Sandoval, Alray Nelson, Julius Elwood, Shawnevan Dale, who were vocal supporters of the campaign, were also present to make sure this recount occurs fairly.

Alfred Bennett, representing the Begaye-Nez campaign, was also in attendance for the recount. 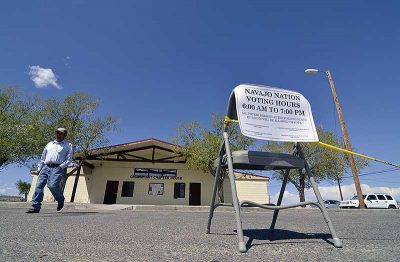 A voter walks out of the Crownpoint Chapter on Tuesday morning, April 21, 2015, after casting his vote in Crownpoint, N.M. (Times photo – Donovan Quintero)

While the recount was occurring, both Begaye and Nez were at their campaign headquarters meeting with their supporters on transition plans and inauguration plans tentatively slated for May 12.

Begaye said the recount is the right of the Shirley-Benally campaign to make sure the election is orderly and happening in a fair manner.

“For us, the voters voted and exercised their right and were just moving forward,” Begaye said. “There is no time to wait.”

Nez explained that he’s also confident nothing will change in the recount.

“The election administration did their job and those that were working on election day did a good job,” Nez said. “I just want to say thank you.”

At approximately 3 p.m. the recount was complete, according to Alray Nelson, assistant campaign manger for Shirley-Benally.

Nelson told the Times that the Shirley-Benally campaign found no change in the unofficial election results. The main concern for the recount was to check the integrity of the voting machine by selecting the 10 different chapters, Nelson said.

“The results are very clear,” Nelson said, adding that there will be no challenges and that plans are now underway for Shirley and Benally to officially give their concession speeches.