Having beaten the top-ranked team in 3A on Saturday, the Page Lady Sand Devils have emerged as the team to beat, according to the Tuesday’s Arizona Interscholastic Association statewide power rankings.

The Lady Sand Devils toppled then-No. 1 Snowflake by a 40-21 count in a defensive struggle at Page High.

After a close first half, the Sand Devils outscored Snowflake 23 to 5 behind an 18-point effort from senior post Torrance Begay.

“Snowflake is a tremendous defensive team and they’re probably one of the best defensive teams that we’ve played this year,” Page coach Ryan Whitehorse said. 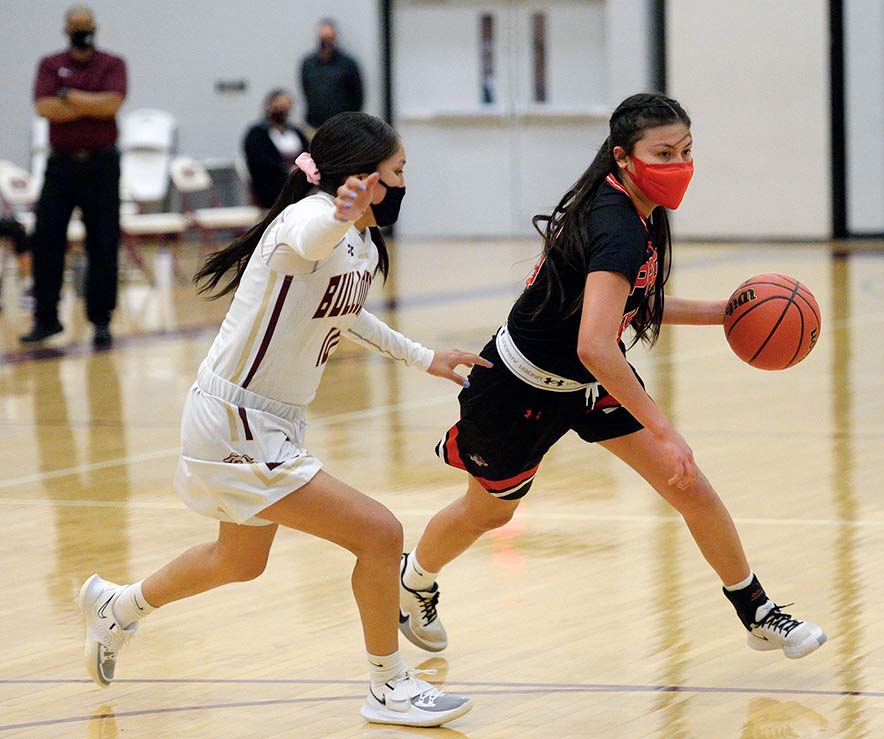 File photo
Page’s Neve Redhair, right, dribbles the ball away from guarding Winslow Lady Bulldog Kristen Wagner on Jan. 19. The Lady Sand Devils earned the distinction of being the team to beat in 3A after toppling over then-No. 1 Snowflake 40-21 on Feb. 13.

The outcome of the game, Whitehorse said, came down to execution, particularly in that second half.

“It was a defensive struggle for both teams,” he said. “But we got onto the girls about settling down on offense and being a little more patient. We were waiting for Snowflake to make mistakes on the defensive end and we took advantage of those mistakes.”

For Snowflake, the Lady Lobos were led by junior Austin Stratton with eight points. Macee Lesueur chipped in seven.

With the 19-point win, Page took over the top spot in the 3A rankings with Snowflake, Holbrook, Valley Christian and Thatcher rounding out the top five.

Whitehorse said being the top-ranked team is nice but their ultimate goal is to win another state title.

“The rankings is something we don’t pay attention to,” he said. “Once the playoffs come any team can win state regardless if you’re the No. 1 team.”

Nonetheless, the Page coach said having that distinction should bode well in motivating his players.

“It’s going to be a huge motivation factor with them keeping that top ranking,” he said. “It proves that the hard work they put is paying off. But we’re not going to focus on (the rankings) too much right now because we’re going to stick to our goal of bringing another gold trophy home at the end of the season.”