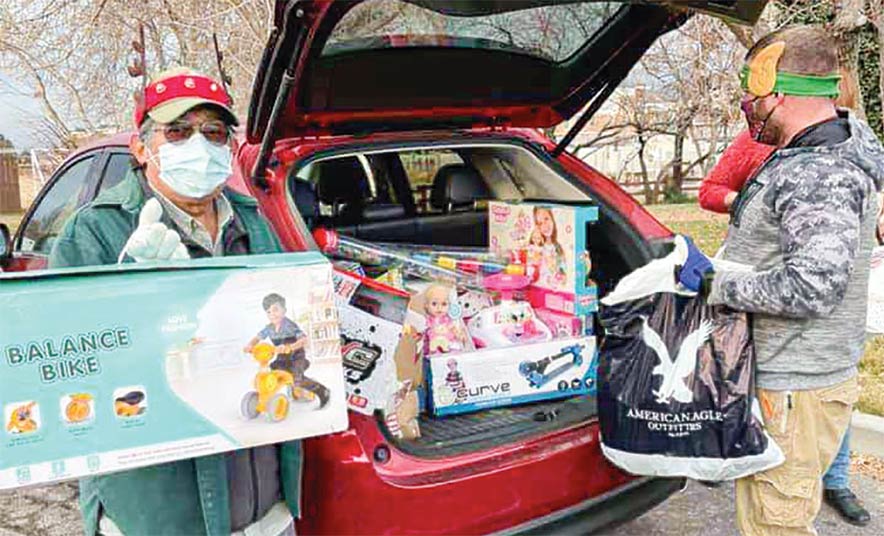 Courtesy Photo | Bud Frazier
New toys are loaded into a vehicle for delivery to children in Piñon, Arizona, where a Christmas giveaway took place on Dec. 18, 2020.

When Bud Frazier first started NavajoStrong, he didn’t expect it to become a huge organization.

Frazier started the nonprofit in April 2020, shortly after the coronavirus first arrived in the Navajo Nation and in response to the pandemic that took lives and stole hopes. The outbreak of the virus has sickened more than 29,200 people in the Nation. And more than 1,100 have died, according to the Navajo Department of Health’s Feb. 15 report.

From startup to creating a 501(c)(3) organization to structure, NavajoStrong has come a long way and Frazier and his team are showing no signs of slowing down. “We went over our finances and we raised quite a bit of money throughout last year and the start of this year,” Frazier said after finishing up a recent NavajoStrong board meeting. “It’s pretty amazing. We’ve got a really good team of volunteers.”

For the past 10 months, Frazier and his team, including his parents – Curtis and Teresa – and brothers Travis, Tyler, and Shea, have been delivering essential supply bins, water and other home goods to families and individuals living in Diné Bikéyah.

The NavajoStrong team members take extreme precautions to protect themselves and the people they serve when they prepare the bins and when they are out delivering supplies. They wear full-body protective suits, goggles, gloves and tight-fitting masks. They wipe down every single bin and disinfect every item they touch to decrease the chances of infection.

“It’s exciting we’re collaborating with other organizations to broaden the scope of what we do (in the Navajo Nation),” said Frazier, who’s the founding executive director for NavajoStrong. Frazier is in the health care field professionally in Lehi, Utah, and is currently working on a master’s degree. “We burnt out,” Frazier said. “And with home life and with school and with work, it’s been hard. But I’ll get text messages from our volunteers and our employees. They send pictures and tell us what’s going on almost every day.”

Every day Frazier connects with his team, shares information and resources, and helps them with solutions to problems through his smartphone. Heartwarming stories (sub) But it’s the heartwarming stories and messages of thanks he receives that keep him going. “The individual stories are amazing,” he said.

One story in particular is about a COVID-19 patient who received a bin of supplies. The patient, a woman, thanked Frazier and the NavajoStrong team for thinking of her at a time she wanted to give up and couldn’t maintain her innate optimism after contracting the virus. “All of her family just ran off from her and they got afraid of her,” Frazier explained. “She thought no one cared about her or wanted to help her out until out of the blue we gave her a bin.

“She wanted us to know that just giving her a bin really gave her hope,” he said, “and it really lifted her spirits and gave her strength to stay strong through her isolation.” He added, “Hearing that really made my day and knowing our work and everything that we are doing with NavajoStrong is worth it.”

Another story is about a Red Valley woman in her early 70s who received help from NavajoStrong. The woman and her husband, both of whom are COVID-19 survivors, were struggling to make ends meet and couldn’t pay their $600 electricity bill. “It’s just really heartbreaking to hear,” said Frazier, who traveled to Red Valley to meet with the woman and her husband just before Thanksgiving. He delivered not only a couple of bins but also a turkey, ham, and all the trimmings. “She was so grateful, and she called me son and said thank you,” Frazier said. “She said, ‘Come back any time.’

“And we were able to catch her up on her electricity bill,” he said. “So being able to do things like that, it’s just – that’s what keeps me going. It’s being able to help and I’m honored.”

Frazier said helping the older Diné men and women brings memories of his late grandparents who would have been struggling with the coronavirus like everyone else. “I’m so grateful that we have such a great team,” Frazier said. “I started it but there’s been a whole team behind me. It hasn’t been all me. It’s been my parents, the volunteers, our employees.”

Some of the volunteers who deliver bins work for their own communities, said Frazier. For instance, a busy Shiprock woman who is part of the NavajoStrong team delivers bins to her community concurrently with taking care of her own family. “But she wants to help her community, so she goes a little bit further if she needs to,” Frazier said about the woman. “If she pulls up to someone who’s in dire need, her and her husband will go (help them).

“So I’ve been amazed at how people who want to help and at how people who see the need to step up,” he said. “I think as a culture, we’re all taught to take care of ourselves and take care of our elders and that’s just really great to see that we can do that and get things going and have an immediate response.” Teresa said Frazier most likely gets his heart of compassion from his father, Curtis, who’s “really patient … loving … (and) has no bounds.”

“He doesn’t have a boundary for those that he loves,” Teresa said of Curtis.

Teresa runs the Shimásání Bi Skirts project alongside NavajoStrong. She and her volunteers make three-tiered skirts to include in the bins for Diné women 60 and up. Like NavajoStrong, she sanitizes each skirt before twisting them up and wrapping them in plastic bags with a glittery ribbon for the women to open as meaningful gifts from the heart.

Teresa’s skirt project started around mid-June 2020. She received a lot of fabric and sewing supplies from across the U.S. after the Navajo Times ran a story about her project in mid-August. “Some have given thread, safety pins and elastic to around the waist,” Teresa said. “And (people have) been so awesome – to have so many people send so many things.”

While the coronavirus outbreak has impacted lives around the globe, some people still donated to Shimásání Bi Skirts, said Teresa, who often gets packages of skirts – ready to be sanitized – made by volunteers across the country.

“Sometimes, the postage of the shipment is $75,” she said. “I can’t believe people will give freely and also pay the postage in a huge box. Those are people who have donated and then some (volunteers) sew the skirts.”

Teresa acknowledges two volunteers, Shawna from New York and Judy from Colorado, both of whom take time to cut the pattern and sew the skirts together. Shawna has sewn 100 skirts thus far, said Teresa, who set a goal for 300 skirts and then raised it to 400 when her project began operating efficiently. She also has Shimásání Bi Skirts volunteers located in Blanding. They accept fabric from Teresa, and they will cut a pattern and sew a skirt together and return it for sanitizing. “I haven’t been able to sew because I injured my wrist, so I really depend on Judy and Shawna,” Teresa said. “I do get two or three skirts from different people.”

Teresa said even though cutting the pattern and sewing it together requires patience, the end result is what matters most. “It makes it all worthwhile,” she said. “The sewing half the night, the wrist injuries from doing all that sewing, you forget about all that when you see a picture with a grandmother with her skirt or a grandmother holding up her skirt. “It really came to life when they sent me pictures and I get to see the grandmothers with the skirts,” she said. “Obviously, there are some that are bedbound or (walker-users) and they don’t get new clothes at all, especially those who are in remote areas. So, when I get pictures it gives me that extra push to continue to do it.”

The LDS Church in December partnered with Christkindlmarkt SLC and with NavajoStrong to sponsor a community service initiative called St. Martin’s Project, during which nearly 800 COVID-19 kits and 700 backpacks were collected and donated for Diné families with school-age children. Christkindlmarkt SLC, a German Christmas market, usually hosts over 100,000 visitors during its annual four-day market in Sooléí. Because of the pandemic, the market decided to help serve the Navajo Nation.

“The COVID kits (comprised) a gallon of bleach, cans of food, toilet paper, hand sanitizing wipes,” Frazier said. “They put together backpacks for kids. They contained colored pencils, a calculator, a ruler, scissors, and either a jump rope or a ball. “So the whole state of Utah kind of came together and did this drive,” he said. “It’s pretty amazing.”

Frazier and the NavajoStrong and the UNHS teams on Dec. 18 spent the day in Piñon, Arizona, for a Christmas giveaway where toys, COVID kits, and backpacks were given to 1,148 children and their families. “Depending on how big the toys were, two or three each, around 2,000 toys were given out (that day),” Frazier said. “It was pretty intense.”

“It’s just given us so many blessings and so many opportunities to meet different people, to meet people who come to help, and nobody expects anything in return, which is wonderful,” Teresa added. “It’s been such a good opportunity and it’s such a blessing and I just can’t believe that people are so giving,” she said, “and they give nice things.”

Frazier added that NavajoStrong truly has been blessed by random people who make monetary donations yet don’t want to be recognized. “We can put their money to good use,” Bud added. “That’s the blessing part. Individually, we’re just happy to do what we can.”