Playing college basketball far from home was not easy for Nahatabaa Nacona. 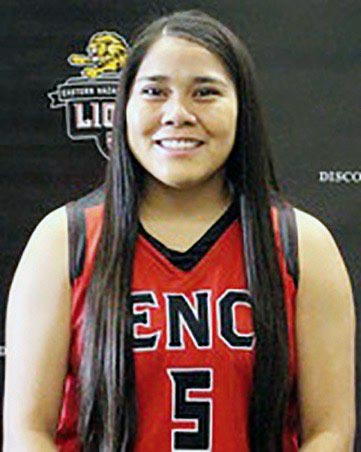 But the Chinle High School graduate developed personally and athletically during her two years at Eastern Nazarene College (Mass.).

The guard had to adjust to life in the Northeast, which meant dealing with homesickness.

“I really exceeded myself,” the recent graduate said. “I didn’t think I was capable of making it that far. I am very fortunate and lucky to have my family and coaches.”

“She instilled a lot of life lessons,” the 5-foot-3 Nacona said. “She really tries to help us to be strong, independent women first and then basketball players. I’ve improved a lot more in my understanding of the basketball game.”

She said the coach’s reviews of film game footage and one-on-one meetings with players helped her grasp what was unfolding on the court.

“Her program is more of communication,” Nacona said.

A main scorer during junior college, she was a secondary shooter for Eastern Nazarene. Last year she averaged six points, which tied for fifth on the team, playing 24 of 25 games. She reached double figures six times, with a high of 17.

This season she averaged 6.1 points, fifth on the team, playing all 11 games.

She came in off the bench to score her season high of 12 against Elms, leading players from both teams in her lone double-digit effort.

“I was trusting my process and the shots I took,” she said.

She has contributed in other areas, though.

She led the team with 1.7 steals per game this season and averaged two assists a game, second on the squad. Her 4.0 rebounding average tied for fourth.

“I found myself being a lot more consistent,” she said.

“She was such a fearless player for us. It led to some big wins for us,” Santimano said. “She’s the ultimate player. She finds ways to balance so much and be so effective on the basketball court.”

Nacona cited last year’s triple-double during a start against Lesley as an especially memorable game. She had 12 assists, 10 rebounds and 10 points in the rout.

Because of the COVID-impacted season, she has eligibility remaining, yet she said she doesn’t plan to continue playing.