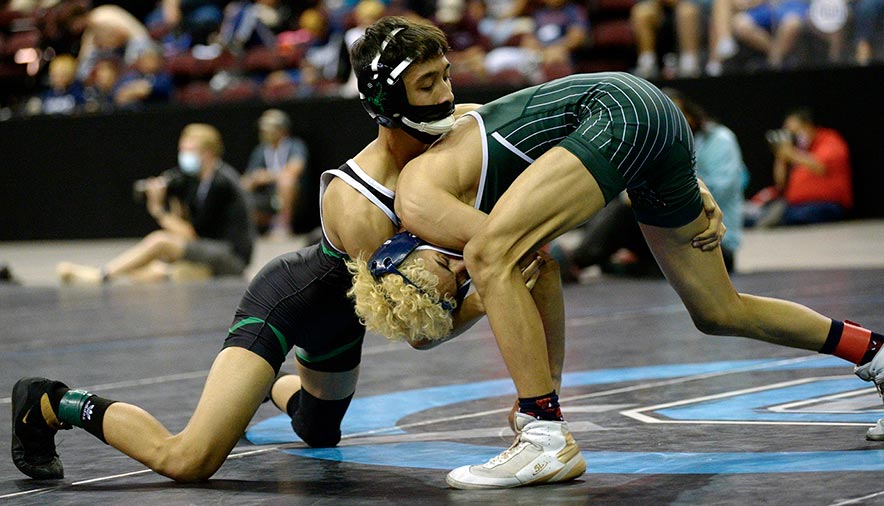 In the chase for the big schools state crown, the Farmington wrestling team got a little help from Los Lunas heavyweight Zach Doyle.

Doyle won his match in resounding fashion as he pinned Rio Rancho wrestler Riley Butt in 13 seconds, which gifted the Scorpions the Class 5A title on Saturday night at the Rio Rancho Events Center.

Farmington finished with 159.5 points, which was six points better than state runner-up Rio Rancho. The Rams racked up 153.5 points while Los Lunas took third with 148.

“It was touch and go right up to the last match,” Farmington JV coach Jason Clark said. “Once the Rio Rancho heavyweight got pinned, we got it won.”

Clark, who was filling in for head coach John Mason, said his team wasn’t expected to win. Nonetheless, the Scorpions had a few things go their way as they had eight wrestlers make the podium during the one-day tournament.

“I think we were seeded third coming into this and these kids stepped up,” he said. “For these tournaments, its won in the consolation side. It’s not the just the championship matches, it’s the third- and fifth-place matches that win it for you.

“Oh man, this is overwhelming,” he added. “The kids stepped up when they needed to and they earned it. It was a battle well fought.”

Spearheading that effort was the first-place finish from sophomore Julian Juarez at 113 and senior Taeoma Frank at 132.

Frank, a Diné, won his match with a forfeit as his opponent, Santa Fe wrestler Miguel Padilla, suffered a concussion in the semifinals.

“Honestly, this means a lot to me because I’ve worked hard all year, even throughout COVID,” said Frank, who was the reserve champion at 126 last year. “I was waiting for this and, you know, my grandmother passed away so I wanted to win this for her.”

Frank said he lost his grandmother last August, which was not COVID-related.

“She took care of me so I wanted to dedicate my state title to her,” he said.

As the tournament’s top seed, Frank won three matches to reach the finals, pinning two opponents and winning by a technical fall.

With those wins, Frank capped the season with an 18-0 record.

“It feels good to go undefeated and win a state title,” the Farmington wrestler said.

In the 113 weight class, Juarez battled back from a 6-2 deficit before winning by a fall with a minute left in the third period over Rio Rancho’s Roberto Cordova.

“He took me down twice but I just never gave up,” Juarez said. “I was down but I had a little bit left in me so I came up with a couple of moves.”

Just before pinning Cordova, the Farmington sophomore came up with a reversal and he got his near fall points before rolling over the Rio Rancho wrestler for a pin.

“He was behind and after he made his move I was thinking that he was going to win by points,” Clark said. “But he rolled him (Cordova) on his back and he stuck him.”

As the tournament’s fourth seed, Juarez took out top-seeded Jonathan Garcia of Albuquerque Volcano Vista in the semis with a fall before he pinned Cordova, the No. 2 seed.

“He stepped up and he had the tournament of his life,” the Farmington coach said of Juarez.

The deep Farmington team had three members that placed third and they include Ivan Smith at 160, Zackary Small at 182 and Ezequiel Borunda at 195.

The Scorpions also got a fourth-place finish from Victor Borunda at 220 and Kioni Benally at 285 while Tyler Savell took fifth at 170.

With the state crown, the Scorpions kept a streak going for District 1-5A as crosstown rival Piedra Vista won last year’s title.

“We kept it within our district and we kept in San Juan County,” Clark said. “We showed all these Albuquerque schools what we’re all about.”