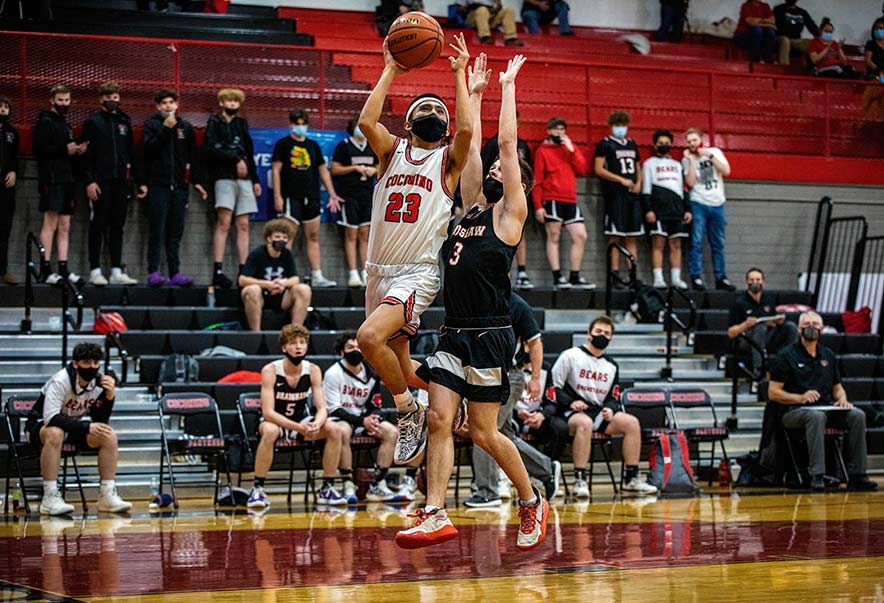 File photo
Coconino senior Jacob Begay (23) attempts a layup against guarding Bradshaw Mountain Anthony Folkestad (3) during a Grand Canyon Region game on Feb. 26 in this file photo. The fourth seeded Panthers advanced to the Arizona 4A semifinals by outlasting No. 12 Mesquite 45-34 on Saturday night. Coconino will play at top-seeded St. Mary’s on Thursday.

On Saturday evening, the Coconino and Page boys won their respective games and are now on their way to the semifinals on Friday.

The Coconino Panthers went up against Mesquite High in a close Arizona 4A playoff game.

The Wildcats made the first basket of the game and led until the five-minute mark with the score tied, 7-7.

By the end of the first quarter, the Panthers took the lead and didn’t lose it.

Mesquite had a good team and offense, but Coconino boys’ coach Mike Moran credits his strong defense that won the game.

“It was our great defense,” Moran said. “Head coach Shawn Lynch said to me, ‘That’s the best defensive performance I have ever seen.’

“He was very nice to me and said what a great job we did defensively and I do think our kids played great and I think that always make the difference in the game, to be honest with you,” he said. “I thought the kids hung in there and down through the adversity and pulled out a great win.”

Senior Preston Olney made three-point baskets and helped with 14 points.

As Onley led the offense, senior Jacob Begay led the defense, the two working in hand at times and helping to secure the victory.

Hayden Nez made 11 points working the interior, a high count that helped secure the win against skilled opponents.

“They (Mesquite) had great athletes,” Moran said. “Coach Shawn Lynch is a great coach, I’ve known him since 1984 … they had great players, they won like 12 in a row, a good team out of (Gilbert). We’re just very thankful to have pulled off this victory. It’s great being home.”

Mesquite chased Coconino all the way, sometimes scoring not long after Coconino did and getting as close as two points. But by the fourth quarter, Mesquite began to tire and Coconino pulled away, winning 45-34.

“We’re obviously very thrilled we came away with a victory and moving down to the Final Four,” Moran said. “We didn’t play as well as we normally do, but the pace was set and I think we wore them down and I think that made the difference in the game. We did what we wanted to do.”

Meanwhile, the Page boys’ won against Coolidge High with a score of 51-43.

Page proceeds to the semifinals in the 3A division. They are seeded No. 5 in the tournament.

The game is predicted to be close and will be the first time the two schools play one another this season.

Also on Saturday, the St. Michael girls ended their season at the 1A championships.

They went up against Fort Thomas and lost 51-36. The Lady Cardinals kept pace with the accurate shooting Apaches, but they had trouble staying consistent and Fort Thomas pulled away.

Despite Fort Thomas’s immense lead, coach Carl Adams said the Lady Cardinals continued to play until the end and gave their all.

“It wasn’t really a good game for us,” Adams said. “I definitely think we could have done things different.

“Our girls gave it everything they could, they went 110 percent,” he said. “For Fort Thomas, everything dropped for them. Their centers worked hard and got everything to the inside. As a result, we ended up losing that game.”

The Lady Cardinals finished their season as the No. 3 in the 1A division and No. 2 in the 1A Northeast.

They won 10 out of 13 games and were the only team from the Navajo Nation to compete this year.

“We would love to win the game and be in that championship game again, but that’s just how it works,” he said. “The greatest thing about this game is that you work so hard to be successful and when it doesn’t pan out you just work twice as hard.”