Analyss Benally started playing basketball on a dirt court outside her house in Shiprock with her grandmother, uncles and cousins. 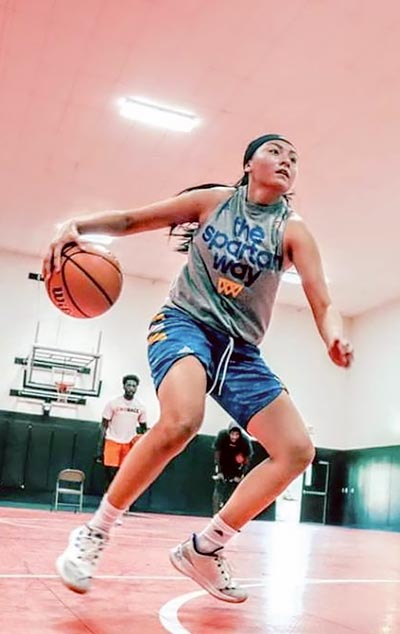 Submitted
Analyss Benally, a Diné with roots in the Shiprock area, is set to play professional basketball in Romania. The deadly outside shooter signed a one-year contract with the Clubul Sportiv Municipal Alexandria (CSM Alexandria).

“It’s exciting, a little surreal, but that was my goal and I’m just happy to get the opportunity to do it,” Benally said. “I’m just really excited to go there in a few months.”

She was born and raised in Shiprock. She has always been around basketball.

Her father, Brian, her cousins and eventually her older sister, Patience, would play the game and she would follow them to different tournaments and watch.

She was about five-years-old when she started playing herself.

“I honestly think it’s just fun, its challenging and it’s what I’ve been doing since I have been a kid,” she said. “I never lost my love for the sport, I just enjoy it, it’s a family thing”

While growing up, she would play with friends and cousins, playing regular basketball as well as the impromptu rez ball where she started developing her shooting skills.

When she was in the 7th grade, her sister Patience graduated and signed to play college basketball for Kansas Wesleyan University.

Wanting to stay close to their daughter, the family moved with her to Kansas where Analyss started going to Wichita Heights High School in Park City.

At her new school, Benally continued playing basketball. She graduated in 2016 with many athletic honors in the 5A division and was credited with a 12.2 scoring average. She was also named a 2016 Navajo Times All-Star and was a member of the 2012-13 Kansas state champions squad.

Her basketball skills caught the eye of San José State University and she signed on to play basketball with them.

She played collegiate sports for the next five years and developed her basketball skills along the way. She’s a very diverse and confident player willing to assist her teammates but also comfortable stealing and driving in the ball whenever she sees an opportunity.

She’s a deadly shooter who can shoot from the three-point line as well as from wherever she sees an opening. She is best known for her shooting abilities.

“The coaching staff and my teammates and the people I met there definitely helped me,” she said. “They were honest with me, they pushed my limits but they helped show me who I really was and the few things that I needed to change about myself.

“But I appreciate everything they did for me,” she said. “They prepared me to go pro.”

Benally set the program’s sophomore single-season three-point record with 60 points and finished the season ranked No. 7 in the Mountain West in three-pointers (two per game).

It has been Benally’s dream to play professional basketball and that has always been her goal as she was inspired by both her family and Shoni Schimmel, a Native who plays for the Atlanta Dream in the WNBA.

In her final year, she started to have doubts as she was injured during the season right before sports was canceled due to the coronavirus pandemic. Because of that she didn’t get much exposure. Despite this, she was still able to graduate with her degree in communications studies.

Then, thanks to her agent, she was recruited by CSM Alexandria, a professional women’s basketball team based out of Alexandria, Romania. She will be one of two Americans playing for the team.

“When I look back and think of all the time I spent training or practicing or doing anything with basketball, I feel like my best memories involves me playing basketball,” she said. “I met the best people through basketball, it’s something me and my family are serious about.

“I have a very close family but I love it,” she said. “If I can keep playing, I’m going to play for as long as I can.”

Benally is excited that not only will she be playing at a professional level, but she will be traveling to new places and meeting new people.

She admits there is a language barrier but she is certain that she will adapt and is looking forward to moving and joining the team.

For her, basketball has changed her life and has become a big part of who she is through the years.

“Basketball has given me opportunities for college and to travel just with college or high school, like I went to a lot of different places and states that I never thought of going to and I just think it’s awesome,” she said.

She thanks and credits her family for helping her to reach her goals, her father and sister for training and preparing her for games. As well as her mom, Vikki who despite having a busy schedule, always made an effort to come to the games and support her.

Benally’s contract is set for just one year, but she hopes this will be the first of many years that she will play in professional basketball.

“I hope I can inspire someone younger than me or the same age as me and letting them know that it’s not impossible,” she said.