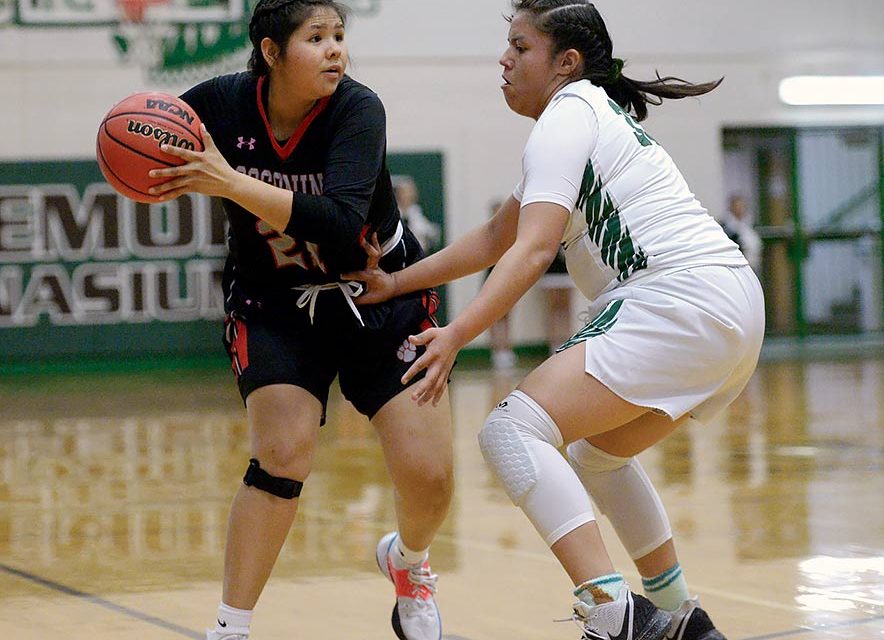 The Lady Panthers hit a pair of field goals at the start of Wednesday’s Arizona 4A state playoff game against city rival Flagstaff High. 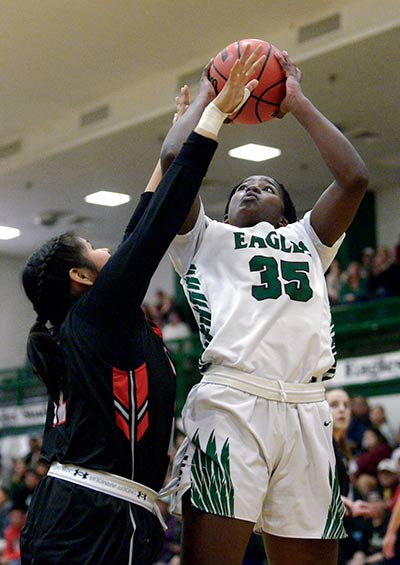 Navajo Times | Donovan Quintero
Flagstaff Lady Eagle Miya L. Verse (35) sets up her shot for the basket against defending Coconino Lady Panther Marilee David on Wednesday night during the AIA Girls 4A State Basketball playoff game in Flagstaff. The No. 5 seed Lady Eagles defeated the Lady Panthers 68-28 and will take on the No. 13 seed Rio Rico Lady Hawks on Saturday at home.

Things, however, took a remarkable turn as the fifth-seeded Lady Eagles used defensive pressure to score a 63-28 win to advance into Saturday’s second round game against No. 13 seed Rio Rico.

“Rio Rico is not a team necessarily to sleep on,” Flagstaff coach Tyrone Johnson said. “We played them last year and we had to play hard throughout.”

“I’ll take that but Rio Rico can definitely play,” he said. “I know they have some guards that we have to definitely got to study and really strategize on how we’re going to be able to stop their guard play because they’re pretty solid.”

In the win over Coconino, the Eagles took a different approach as they pressed the Panthers for much of the contest.

“We don’t run it well so we don’t do it all the time,” Johnson said, wnoting that they hadn’t run their press against Coconino in their previous two meetings.

It didn’t take long for the Eagles to efficiently run the press as they increased a 12-9 first quarter lead into a 42-13 halftime cushion.

Of the 14 players that saw some court time, 11 scored headed by the monster game turned in by freshman post Miyah Verse, who finished with 28 points.

Johnson said Verse’s maturation throughout the season has been a progression. And with her teammates wanting her to succeed his freshman post is starting to show her true potential.

“Her evolution just needs to continue,” he said. “Hopefully, you’ll be able to see something really special from her as the years go on.”

In addition to Verse, the Eagles also had freshman guard Sage Begay finish in double figures as she came off the bench and scored 12 points.

Johnson said Begay “maximized her moment” with the early playing time she had as Flagstaff was without the service of sophomore Gracelyn Nez.

“With Nez not being 100 percent the plan was to play her only if we needed to,” Johnson said. “It gave the opportunity for somebody like Sage Begay, who might have been a little deeper in our rotation to step up and Sage was able to make an immediate impact.”

For Coconino, junior Kiana Manuelito finished with nine points in the losing effort.