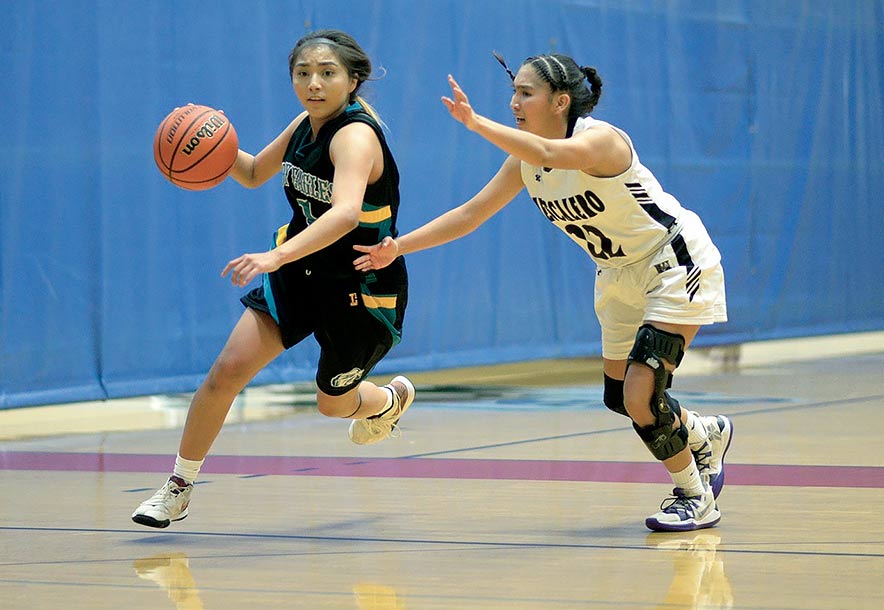 File photo
Navajo Prep Laila Charley (left) dribbles away from a Mescalero Apache player in this file photo. The top-ranked Lady Eagles defeated Tohatchi 41-32 on Thursday night and improved to 14-2 overall and 2-0 in District 1-3A play.

Despite a rabid Tohatchi fan base, the Navajo Prep girls’ basketball team took the first of what could be four match-ups between the two Class 3A state powers.

The top-ranked Lady Eagles built an early 14-1 advantage and that cushion was enough to hold off a pesky Tohatchi team 41-32 on Thursday night before a capacity crowd at THS.

Afterward, Navajo Prep coach Rainy Crisp was very grateful that her team got off to a good start as they found some rhythm in the opening quarter. Prep got five points each from Laila Charley and Aiona Johnson to establish some control.

“That’s important (because) when we play in this gym it’s nerve-wracking,” said Crisp, whose team improved to 14-2 overall and 2-0 in District 1-3A play. “I was telling my girls that the first two minutes of every quarter is most important, especially coming out in the first half.”

After that initial volley by Prep, second-ranked Tohatchi found its footing and closed that gap to 14-7 after a trey from senior Sicely Miller with seven seconds remaining.

But with plenty of time remaining, Navajo Prep junior guard Cienna Harrison released a three-point attempt just as time expired to give the Eagles a 17-7 advantage.

With both teams playing superb defense in the second, points were hard to come by as Prep led 22-13 at the break.

In the third, the Eagles caught Tohatchi napping, cashing in on a pair of transitional layups for a 30-15 cushion with less than five minutes remaining.

Despite trailing by that much, the Cougars never waned as they put together a 12-2 run behind junior post Montana Soto.

The 5-11 post gave Tohatchi some instant offense as she used her size and scored eight points to get Tohatchi within 32-27 in the early going of the fourth.

“She came through for us in that third quarter,” Tohatchi coach Tanisha Bitsoi said of Soto. “She’s grown a lot. She’s adapting to the faster pace of the game. I felt that tonight she proved herself and she stayed up with them.”

In the midst of their comeback, Bitsoi did rotate Soto out, much to the disapproval of the hometown crowd.

“I heard them but she was pulling on her jersey when she needed a break,” the Tohatchi coach said of the jeers and catcalls coming from the fans. “She asked for the break and I was not wanting to give her a break.”

After taking a breather, Soto was reinserted in the lineup and her free throw made it a 37-30 ball game with 4:33 left in the contest.

That was as close as Tohatchi would get as Navajo Prep burned some clock by spreading the floor late in the contest.

“I’m glad we had that cushion,” said Crisp, while adding that Tohatchi proved to be a great adversary.

“We knew coming in that it was going to be a tough game,” she said. “They have a great crowd and they have great support from their fans. I’m glad that we were able to pull it out.”

Hailey Martin and Aiona Johnson led the Eagles as the two juniors finished with 11 points each.

And while they were disappointed, Bitsoi said she was real proud of her team for not giving up.

“I don’t know who we were in that first half,” the Tohatchi coach said. “But I can’t say enough of how proud I am of them. They showed some resiliency to continue to fight.

“I feel like as bad as we played we were still in this game to win it,” she added. “Even in the last minute or so we were still down five (points) and we had a crucial turnover.”

Navajo Prep’s next game is on Tuesday when they travel to Thoreau for another key district game.

Tohatchi (14-5, 2-1 in district) will try to regroup, as they will also hit the road on Tuesday when they play at archrival Wingate.