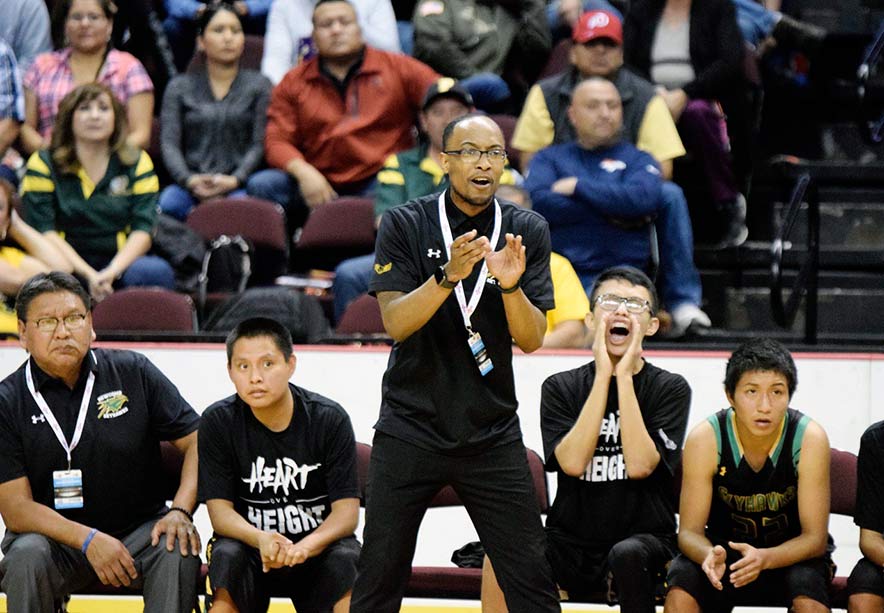 But the 34-year-old San Antonio native received an offer last week to coach at Corpus Christi West Oso, one of Texas’ premiere 4A schools, and he couldn’t refuse.

“If I didn’t get the job I would be set in stone in Newcomb,” he said. “I got a chance to develop more as a coach, being at a bigger school, it’s a 4A school in Texas, that’s pretty big. And I get to be close to home. It’s two hours away from San Antonio. It’s kind of bittersweet.”

It didn’t take Richardson long to shake things up in Newcomb as he brought a group of young junior high athletes to the varsity team in his debut 2014-15 season.

That year, Newcomb was crowned district champion and received the No. 13 seed and traveled to Tucumcari but fell short in the first round. Richardson and the Skyhawks went 20-6 overall that season.

Richardson said when he started at Newcomb he was a young coach, looking to find himself, and did not expect the impact the team had on him.

“I met the kids for the first time that year and we just kind of hit it off with a great connection,” he said. “It was a place where I could establish myself.

“It was one of those things where I thought I’d just build my resume, get people’s attention, show them that I could build a program,” he said.

Newcomb fell short in the district tournament and did not return to the state championship. They ended the season 9-17 overall and 2-6 in district.

That was also the year Richardson got his first real test as a coach. He was offered a coaching position at St. Mary’s University, his alma mater in San Antonio, and took it. He took the break during the 2016-17 season.

Richardson said it was a premature decision, but one that he learned a valuable lesson from.

“I loved being back home, coaching at my alma mater, but it wasn’t for me. It made me realize, I feel like my skill level, my admiration is at the high school level, trying to get these kids to the college level,” Richardson said.

“It’s one of those things that I even told some of these kids – don’t jump up to opportunities because of the name,” he said.

Feeling a need to return to Newcomb for unfinished business, Richardson trekked back to the reservation.

In the 2017-18, he guided the Skyhawks to a history-making season. They won their first playoff game in history and lost in double overtime to Santa Rosa in the quarterfinals.

Richardson and his team vowed to return to the playoffs the next season and to go deeper into the bracket. In 2018-19 they did just that.

Not only did they return to Albuquerque, they made their first title game appearance, falling short to Pecos and finishing in second place.

They ended the season with the most wins in school history with a record of 29-3. They returned this past season, 2019-20 and ended their season in the semifinals, falling short, again to Pecos.

Richardson said it is those pivotal moments he’ll miss most. He said it’s also those big moments that helped him advance to the next stop of his coaching journey.

“Honestly, it had everything to do with it,” he said. “The superintendent and the AD (athletic director at West Oso) there did their homework. They looked up every year I coached, they looked up the previous years of how Newcomb was.

“I’m going to miss Newcomb and everything I’ve done here in the community,” he said. “But I’m ready to take on another opportunity, another challenge in my coaching career and see what I can do with it.”

And much to his surprise, most in the community thought the same.

Richardson said the reaction to his leaving was more humbling than he had expected.

“Overall, for the most part, it was positive,” he said. “The players took it well. Some of them came and saw me, wished me the best.”

Richardson will move on to a south Texas team known as a basketball powerhouse with a long tradition of regional and state championships.

And though he’ll be about a 15-hour drive away, he said won’t soon forget the people of Newcomb.

“Being able to work with coaches that had the same mentality, the same vision that I had,” he said. “The connections I built with the community. Some of them took me in as family and made sure I was OK. Just relations that I built.”