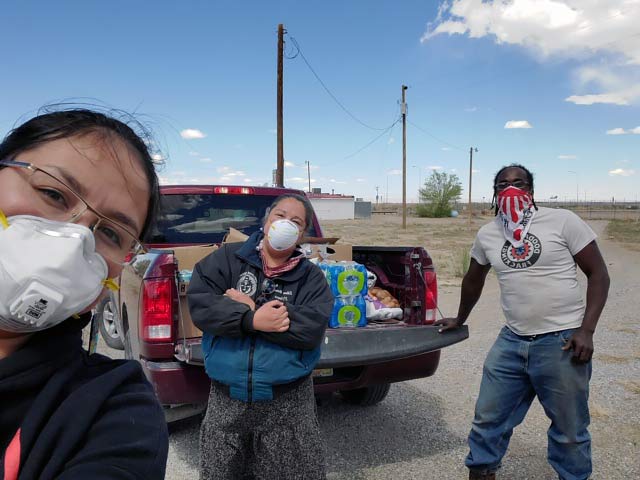 Eight billion federal dollars have been authorized for tribes in the fight against the deadly coronavirus. But the funds have strings attached such as grant applications, signatures and requirements – conditions that are delaying access to protective equipment, medical supplies, food and water.

Frustrated with the snail-like federal response as friends and relations fell ill, Navajo Nation Council delegates, educators and tribal members looked to an old friend for help – former New Mexico Gov. Bill Richardson. “I got calls asking for help getting medical kits, masks, gowns, cleaners, food and water,” said Richardson. “We had to find a way to deliver supplies to the Navajos.”

Even if funds are available, some tribal communities, like Alamo Navajo, cannot get enough PPE, personal protective equipment, and medical supplies. The population is more than 2,000. “Our suppliers tell us we are limited on how much we can buy,” said Frank Curley, executive director for the Alamo Navajo Community School Board.

Without wasting time, Richardson established the Covid-19 Navajo Families Relief Fund in partnership with his Center for Global Engagement, Molina Health Care, Diné community groups and the New Mexico Children’s Foundation. On April 10, five days after the initiative was set into motion, health and medical supplies began to be purchased for delivery and distribution to Navajo communities in New Mexico.

“What we are doing is an immediate humanitarian effort,” Richardson said. “The primary focus is reaching communities that haven’t received supplies yet,” said Carolyn Ingram, a vice president for Molina Health Care.

Ingram said the health insurance company stepped up to help because it has a history of responding when disaster strikes. “We know how to bring in supplies quickly, tapping into manufacturers, purchasing items and making sure they get shipped,” said Ingram. The company operates in 14 states including New Mexico, and Puerto Rico.

According to Bill Richardson’s spokesperson, the fund has an initial goal of $100,000 and half of this goal was reached on Monday. One of the first donations is a “five-figure” amount from Gallup business owner Ernie Garcia. Richardson said all sizes of donations, big and small, are welcome. “We want people to be committed,” he said.

Richardson jumpstarted the fund with an undisclosed “substantial amount” matched dollar-for-dollar by Molina. Molina also donated the first round of supplies from its charitable giving arm. The New Mexico Children’s Foundation is the fiscal agent for Richardson’s ongoing relief fund.

To make sure supplies get to where they’re needed most, Ingram said she connected with Diné community groups already on the ground providing relief assistance, like the Navajo and Hopi Families COVID-19 Relief Fund (NHFC-19RF) established by Ethel Branch, the former Navajo Nation attorney general. Branch’s initiative engages volunteers from home communities to deliver supplies.

“They know their community best,” said Janene Yazzie, the New Mexico organizer. “Our volunteers are amazing, a lot of times using their own resources, personal vehicles, and personal time,” she added. “They have families back at home worried about them.”

“What we are trying to do is complement the work these small nonprofits are doing,” said Ingram. “Our health care system really needs direct access to PPE gear and a quick and effective turnaround,” stressed Yazzie.

She said that includes clinics, hospitals, facilities for special needs children, first responders, health care workers, volunteers and families. The first delivery of 1,500 N95 masks, 1,000 pairs of medical-grade gloves and 500 gowns is scheduled to begin arriving this week in Albuquerque, according to Richardson’s spokesperson.

“(With) access to these materials, we can really be effective in stopping the spread of the virus,” said Yazzie. As funds are donated, Richardson’s initiative will be purchasing more PPE and medical supplies along with food and water for families.

“I’m not surprised that Bill Richardson and his group are doing this for Navajo families,” said former Navajo Nation Chairman and President Peterson Zah. “He is one of these individuals that when a crisis like this happens, they find a solution,” he said. Zah has known Richardson for more than 40 years. “Bill Richardson is a friend; he really helped the Indian people,” he stressed.

Giving an example, Zah said the American Indian Religious Freedom Act of 1994 passed because of Richardson’s support when he served in Congress during the Bill Clinton administration.

As New Mexico governor (2003-2011), his widespread support for Native communities included New Mexico State Sen. Leonard Tsosie’s Internet to the Hogans project to develop broadband services across the Navajo Nation. Richardson said that the Navajo people have been there for him, too. “It’s been a special relationship,” he said. “When I was elected to Congress in 1982, I won by a narrow victory because of the Navajos.”

“This is a global pandemic,” said Navajo Nation President Jonathan Nez. “This is an emergency. You would think they (would acknowledge that) and send funding directly to tribal communities.”

As of April 21, the Navajo Nation Department of Health reports that across the Navajo Nation there are 1,321 coronavirus cases. There have been 45 deaths. On Thursday, March 16, Marcos Pino, the Alamo Navajo Community School’s basketball coach, died after being exposed to the coronavirus, according to an Albuquerque Journal sports story honoring his life. He left behind his wife and five children. He was 42.

Donations to the Bill Richardson Covid-19 Navajo Families Relief Fund can be made at www.nmchildren.org.