Celeste Claw, or “Boka” as many people know her, is the new girls’ head basketball coach for Page High.

Claw, a 2012 graduate of Page High, has a passion for basketball and has experience in coaching, making her feel confident in her new position.

“I grew up in the community and the community knows me a little bit,” Claw said. “But I am also relatable with the girls from just being an athlete from Page.

“Our program comes out very strong and we definitely have this philosophy of all run-and-gun, and defense,” she said. “So I know exactly what they have been through, I personally experienced it myself, so I feel like I can continue to support and help them through that.” 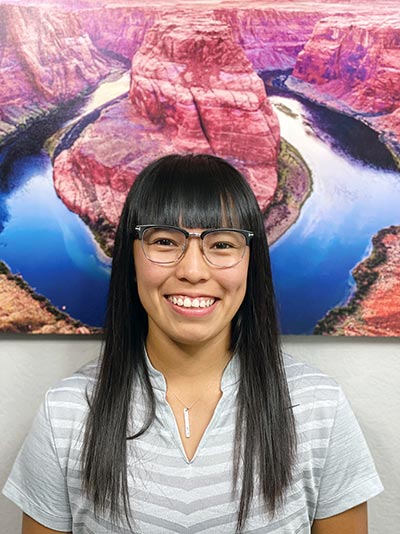 Submitted
Celeste “Boka” Claw was recently hired to take over the Page girls’ basketball program. A 2012 graduate of Page High, Claw is feeling confident about her new position.

Claw was born and raised in LeChee, Arizona, just a few miles southeast of Page. She’s been going to school in the nearby town her entire life.

When she was young, her uncle started calling her “Boka,” a family nickname that her friends, coaches and even rivals would soon come to know her by.

For as long as she can remember, she has always been active in a variety of sports. Growing up she played basketball, cross-country, soccer, softball, volleyball, flag football and tried golfing for a while.

She thought cross-country might have been her calling, but she soon found basketball was her favorite overall as she played in the point guard position.

After graduating, she signed on to play collegiate basketball for Chandler Gilbert Community College.

Two years later she transferred to Brigham Young University in Hawaii where she continued playing before graduating in 2016 with a bachelor’s in exercise and sports science with emphasis in sports performance.

“Sports had a huge impact on my life,” she said. “I wouldn’t be the person I am today without sports as my background growing up.

“It builds a lot of character, a lot of discipline and I have a lot of respect for people who do it and for the referee who calls the sports, too, because it takes a lot of work,” she said. “So yeah, I see the impact on sports on youths.”

After graduating, Claw moved back to Arizona and started working as a performance specialist for EXOS, a prominent fitness company in the Valley. She led people in warm ups as an intern before becoming a full-time member a few months later.

A year later, she became a performance coach for the Blue Cross-Blue Shield Association and held the position for the next two years.

She wasn’t certain on what to do this year. She considered going into a business line of work. Hearing that the basketball coaching position for her old high school was open, and decided to apply.

“A big key of what I value is the strength training side of things, injury prevention: making sure the girls are staying healthy and getting strong in the off season,” Claw said.

“This goes out to everyone, it is something that is very valuable to the youth, athletes and that is what prolongs their careers, in all sports not just basketball itself.

“So I am excited to get that more evolved into the Page community and honestly promote good health and wellness.”

Even though the coronavirus pandemic closed many schools and shut down sports in the past year, the Page Lady Devils team was able to have last-minute practice sessions and were able to go to state, winning the 2020 3A state championship under the leadership of coach Ryan Whitehorse, who retired earlier this year.

“I give coach Whitehorse credit for having to coach throughout that tough year for the girls,” Claw said. “I don’t see it as a challenge for the team coming into this upcoming season.

“For me personally, that has been what brought me back home,” she said, “being closer to my loved ones and being able to get back to my community sooner. Honestly life changes so quickly and a lot of things happen, so I just want to build the best memories out of it and inspire those who I can inspire.”

Claw is certain that the Page team will remain at its best. She met and trained with some of the girls this summer and led them at some tournaments. Although there are only a few seniors planning to return and a lot of new players on the team, Claw is confident.

“I am looking forward to this season,” she said. “We have a bunch of new girls, besides two returning seniors. I feel that we’re definitely building that chemistry together since they are new and I am new, we are all going to grow together in the upcoming season.”