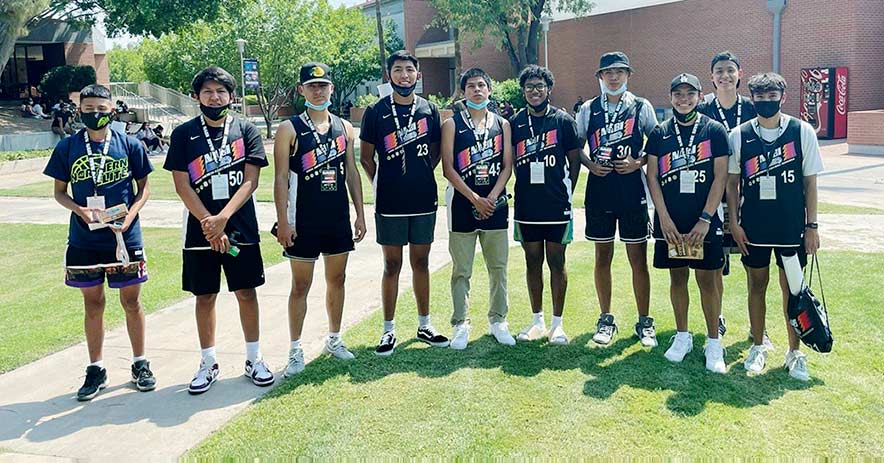 Submitted
The Northern Elite basketball team won its first game on Wednesday during the 2021 NABI basketball tournament after going 0-3 in pool play action.

Coronavirus restrictions in the Navajo Nation has limited traveling teams from taking on any type of practice regiment.

Those teams had to coordinate practices through video and text messages. Clearly, those means of communication has put them at a disadvantage in preparing for tournaments like the 2021 NABI tournament that is being played in the Phoenix metro area this week.

The Northern Elite boys basketball team falls into that category, as the Window Rock-based squad didn’t hit the gym until two weeks ago when they played in a tournament in Albuquerque.

Last week, they got a few more games in, playing in another tournament down in the Valley.

“We entered those tournaments to get a few games under our belts because we don’t have any gyms back home that is allowing us to practice,” longtime Northern Elite coach Rick Destea said. “We’ve been communicating through text messages and videos and it’s not the same as gym time.”

Destea said his team is made up of players from Arizona and New Mexico from varying schools, which includes Navajo Prep, Shiprock, Los Lunas, St. Michael, Chinle and Rehoboth.

“We’re a pretty solid team,” he said “Everybody is kind of balanced out. We do have a lot of good shooters and they can penetrate.”

In addition, Destea said they have speed to go along with some size.

And while they have showed glimpses of their potential, Destea said his team has struggled to get through their games during pool play action earlier this week.

“We have been struggling in finishing out games,” he said. “We’re starting out cold but we’re still battling. The boys are leaving it all out on the court and they’re working hard.”

The Northern Elite defeated SMOQWE, a Washington-based squad, in the opening round of bracket play by a 64-61 count on Wednesday. The Destea-coached team would have played Snaketown last night with the winner advancing into the third round.

Unlike his previous teams, Destea said this year’s squad is made up of players from all grade levels.

In 2019, his squad got as far as the Elite Eight, losing to the eventual national champions. That squad was primed to do great things as he returned most of their players for the 2020 run but the tournament got canceled due to the pandemic.

“We had everyone coming back that was apart of our program from the previous years,” Destea said. “We had a good shot at making the championship game. Unfortunately with everything that happened the tournament got canceled. We didn’t get to play that entire year because of the pandemic as none of our programs got into any tournaments last year.”