The Rehoboth boys’ basketball team will get a fifth look at a state title game.

The top-seeded Lynx advanced to the Class 2A finals after beating No. 4 seed Mescalero Apache by a 46-34 count on Wednesday night at St. Pius X High School.

The Lynx played in four previous state title games with the last one coming in 1983. This year’s group is seeking the program’s second blue trophy. 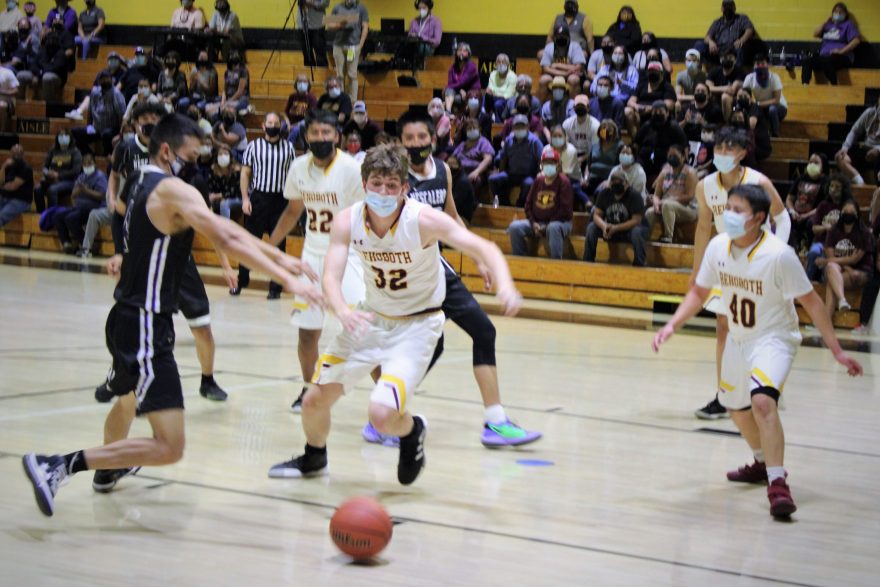 The Navajo Prep girls were also semifinals winners as they defeated No. 4 seed Hatch Valley 53-29 in the 3A bracket at Bernalillo High School on Wednesday.

The 12-point win pits Rehoboth against Jal in a 1-2 matchup on Friday afternoon inside the famous University of New Mexico Pit. Tipoff is scheduled for 4 p.m.

“We can’t be more excited,” Rehoboth coach Kevin Zwiers said. “This group has set that goal for a long time and they want to play in the Pit. I mean, we’ve worked so hard for this and we get to realize that dream.”

Rehoboth junior Talon West said there’s been a lot of buzz about the talent they return from last year’s state quarterfinal run, so making the state title game seemed to be their destiny.

“It feels great,” West said. “I want to say that we knew that we would get here because we had a feeling that this was our year. We’ve been preparing a lot for this so this is exciting.”

“Last year falling short in the Santa Ana Center I was like ugh,” he said. “But we pushed and I’m very happy that we get to play in the Pit. The whole team just kept pushing and we had that ‘We don’t want to go home’ mentality.”

Teammate Casey Joe added that the progression to make the title game was years in the making.

“Ever since the first day, we dreamed about this spot, this opportunity,” he said. “We’ve been playing with each other since middle school and we stayed consistent with each other and over the years the chemistry that we have kept building and building.”

In Wednesday’s contest, the Lynx trailed the Mescalero Apache Chiefs 17-11 in the opening quarter as Zylstra got into early foul trouble.

“It was two stupid fouls that I should have gotten,” the senior post said. “We got down and I felt really bad for the team but we got a spark and we starting to work our way back.”

Behind three treys, two by freshman Raeden West, the Lynx closed the gap to 28-26 entering the half.

After the break, Rehoboth’s defense was too much for the Mescalero Apache team as they held the Chiefs to only six second-half points, which included a single point in the fourth stanza.

“What we did was switch defense on them and that seemed to throw them off a little bit,” Zwiers said. “We were down by two coming into the second half and they turned it over a few times and we just built the lead from there.”

Zylstra led the Lynx with 14 while Talon West added 12 and Raeden West chipped in eight.

In the 3A girls’ title game, Navajo Prep will be seeking its second consecutive title against No. 6 seed Las Vegas Robertson. The finals are set for 12:30 p.m. on Friday at the Pit.

“There was a lot of uncertainty going into this season but the girls all came together before April to get things going,” Tohatchi coach Tanisha Bitsoi said. “I’m very grateful and thankful that we were able to make it this far. “Considering all the factors involved, I can’t say enough about how far we’ve come,” she added. “We faced a lot of adversities and challenges during our shortened season and in the end we gave ourselves a chance to play in that championship game.”

Tohatchi finished the season at 9-5 overall.

In the 3A boys bracket, the Navajo Prep Eagles also had their season cut short as they fell to No. 2 seed Hot Springs by 46-29 count.