The Arizona Christian University women’s golf team doesn’t have enough players to compete as a team.

So Navajo Preparatory School graduate Kylie Begay is among three who are representing the school as individuals. 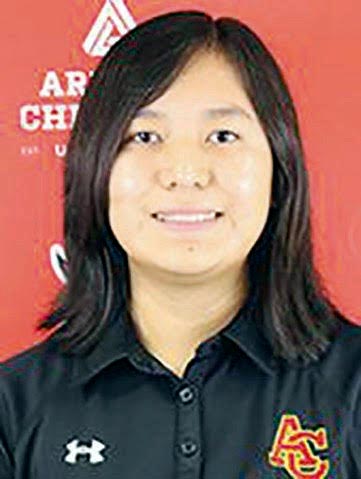 Last year Begay had an 88.75 scoring average in playing five of six tournaments. She participated as an individual in a September 2019 event and finished with a higher placing than two teammates whose scores counted for the team.

In the first tournament this fall, the sophomore tied for seventh overall and was second among Arizona Christian’s entries. And in the third round of the second tournament, Begay shot a career-best 76, tying for 18th with 266 (97-93-76).

“I’m pretty happy,” she said. “I’m just blessed we get to participate in sports.”

She has focused on her short game. Now she holds the club with a firmer grip when putting because the coach called her previous grip weak, she said, and the new grip improves her accuracy.

“She’s been working hard on her short game. Sometimes she would leave putts short, maybe not putt as aggressively as I would like,” Parker said. “Once in a while the feel is off on the longer putts.”

Begay said she is happy with the improvements in her putting.

“I’ve been getting the ball past the hole,” she said. “When I’m short, it’s my pacing, and I’m not keeping my head down.”

The shortest on the roster at 5-foot-3, she also has adjusted her swing to add yardage.

“I used to swing lower and farther back, almost wrap it (the club) around my body,” she said. “I’m getting my arms higher so that I can improve on swing distance.”

The fall schedule concludes with a November tournament.