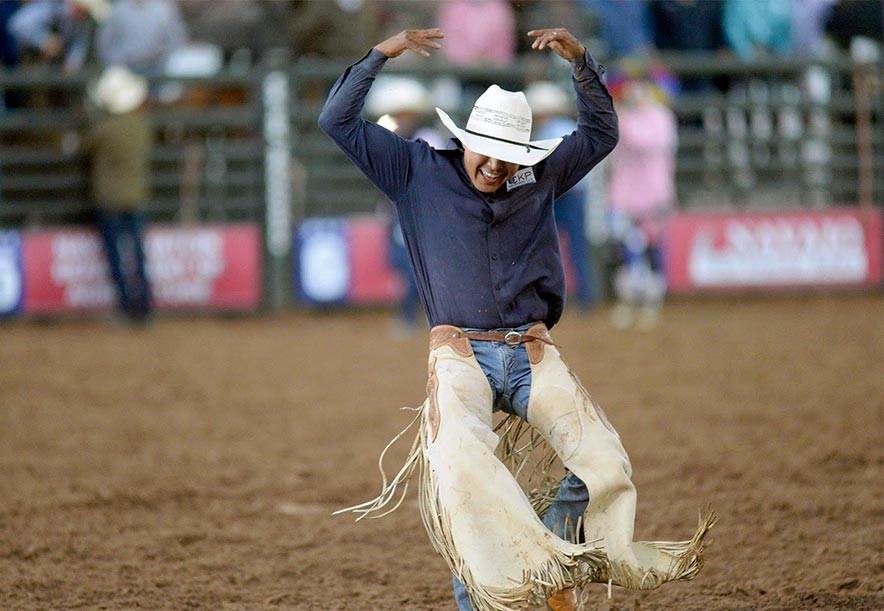 Special to the Times | Ravonelle Yazzie
Saddle bronc rider Creighton Curley celebrates after making an eight-second ride in Window Rock during the Annual 4th of July Celebration on July 4.

The 2022 PRCA season has been full of ups and downs for Creighton Curley.

He started the year as one of the world’s top 50 saddle bronc riders. 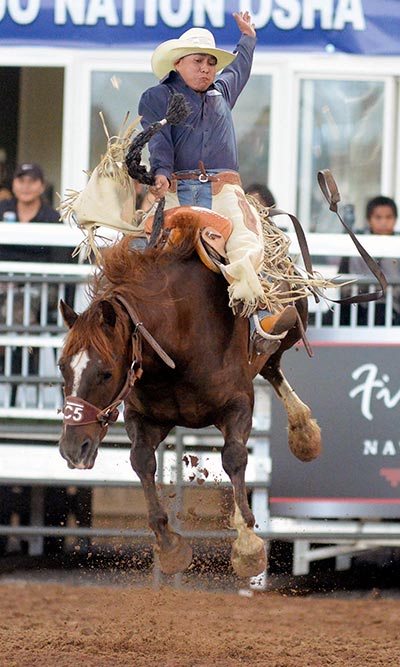 Special to the Times | Ravonelle Yazzie
Creighton Curley finds his rhythm to successfully make an eight-second ride on Sunday during the Annual 4th of July Celebration in Window Rock. Curly finished with a 72.5-point ride for third place.

Things, however, have been stagnant for the Allentown, Arizona, cowboy.

Before the Cowboy Christmas run, he earned two checks in the 13 rodeos he’s entered in the last three months.

“I started off pretty good,” he said. “I was sitting like in the top 50 for a couple of months, and then I got bumped out in April.

“I haven’t been winning any money, so it’s been tough,” he added. “It’s kind of hard to get it going again.”

While looking to right that ship and get back to winning, Curley took a step in the right direction with a third-place finish at the PRCA’s Annual Fourth of July Celebration in Window Rock.

“I really didn’t think too much of it,” Curley said of his score. “I was more concerned about getting my horse rode. I got my horse rode, so I’m pretty happy with that.”

In addition to Window Rock, Curley entered three other prorodeos during the Cowboy Christmas run with no such luck.

He posted a no score at the World’s Oldest Rodeo in Prescott and the Oakley Independence Day Rodeo in Utah.

Despite his slump, Curley is optimistic about the upcoming 81st Pikes Peak or Bust Rodeo Days in Colorado Springs July 13 to 16, which is billed as the 2022 NFR Open.

“It’s going to be a big opportunity for me,” Curley said. “There’s plenty of money to be won there. There’s like $80,000 added money per event, so I just got keep being consistent and got out there and win.”

He sits third behind a pair of New Mexico cowboys, with Tularosa’s Ross Griffin leading the circuit with $6,842, while Socorro’s Leon Fountain has won $4,000.

More than anything, Curley wants to move up in the world standings in hopes of getting his foot in the door at some of the biggest PRCA rodeos next spring.

“I want to finish in the top 40 so that I can get into those rodeos,” he said. “I can’t get into them right now because I don’t have enough qualifications. I’m barely starting off and trying to work my way up there.”

This is Curley’s second season as a PRCA member. The 25-year-old cowboy got his permit in 2018 and kept it for two years before entering his rookie year in 2020.

“I only went to five rodeos when COVID happened, so that was a bummer,” he said of his rookie season.

And although he competes in the INFR ranks, Curley said he would try and stay on the prorodeo side in hopes of making the Wrangler National Finals Rodeo next year.

“That’s my goal,” he said. “I want to finish the season there, and I like to thank my wife (Jareth Curley) and daughter for all their support.”