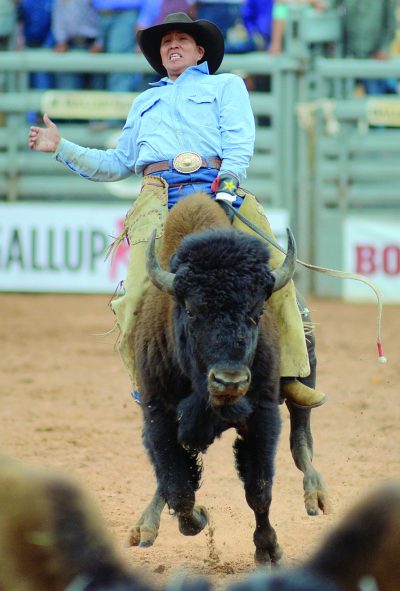 Riding a buffalo was no easy feat for professional team roper Derrick Begay.

The Seba Dalkai, Arizona cowboy settled to do this at this year’s Gallup Intertribal Indian Ceremonial Old School Rodeo. Admittedly, though, he was also baited into taking that plunge.

“I have a couple of friends that told me I wouldn’t do this,” Begay said. “They didn’t believe me that I got entered, but for me it was more a pride thing.”

Begay said he was the last one entered, as the Ceremonial rodeo committee was looking for one more rider to fill up the slots during last Thursday’s slack performance.

“Nowadays a guy may never get a chance to ride a buffalo in his lifetime so this was my chance,” Begay said. “With the way things are looking the chances of doing this is getting slimmer and slimmer because I’m not getting any younger. I felt that this was my chance.”

On Sunday afternoon, Begay stayed in the middle of his animal to the tune of 82 points, which was the highest scored turned in.

“I wasn’t worried about the other riders beating me,” he said. “It was more about bragging rights so I didn’t want to fall off this buffalo in front of all these people and in front of my friends.”

Now that he’s checked buffalo riding off his bucket list, Begay said he’s not inclined to do it again.

“That might be it,” he said. “That’s going to be my first and last time I’m going to ride a buffalo.”

His score bettered the 81-point ride turned in by Vanderwagen, New Mexico cowgirl Desirae Wilson.
“Last year I got on my first buffalo and I just wanted to try it again,” said Wilson, who is an accomplished novice bull rider.

Like Begay, Wilson had complete control of her ride but she had to wait a while to dismount her buffalo as her animal made its way to the herd.

“I was afraid to get off because I could have gotten trampled,” she said.
In the women’s steer riding event, Wilson registered a 75-point ride to win the title.

“The steer was pretty nice,” she said.

Near the conclusion of the Sunday’s rodeo, Sierra Begay and Justin Wilson were voted best-dressed cowgirl and cowboy.