The wait became a bit nerve-wracking for Robbie Taylor Jr. 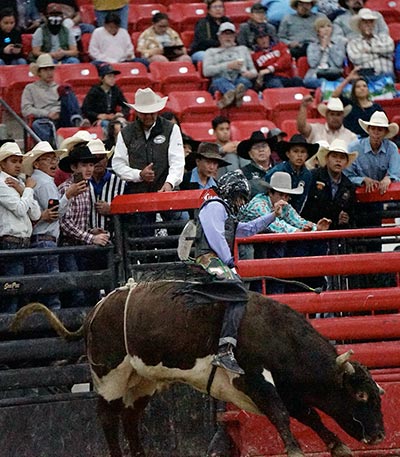 That could be said for the packed crowd inside the South Point Equestrian Center as the bull riding finale at the 2022 Indian National Finals Rodeo became suspenseful on Saturday night.

After getting bucked off, Taylor had to wait for Montana cowboy Preston Louis to get his re-ride bull, which delayed the coronation of this year’s winner.

Like the other nine bull riders, Louis was eventually thrown from his draw, earning Taylor the world title.

“I was waiting behind the chutes to see what he does,” the Chinle bull rider said of his counterpart. “He had that re-ride, and it got pretty nerve-wracking.”

Four bull riders covered three of four draws, with Taylor coming out on top with 244 points. Oklahoma cowboy Cannon Cravens took second with 241 points, which included a second-place score of 77 points in Saturday’s championship round.

Louis was a close third with 239 points, while Lupton, Arizona, cowboy O’Dey Tom took fourth with a 236 aggregate.

Tom picked up the first-place check in the final round with an 82-point effort.

“I knew this was possible,” Taylor said of winning the world title in his INFR debut. “It means a lot to win it, and it shows how far I’ve come and how much I’ve matured as a bull rider.”

The 19-year-old bull rider covered his first three draws, as he won the first and third rounds with 83- and 85-point efforts.

“That third round really brought up my average scores really high,” Taylor said.

As for his last ride, Taylor lasted four seconds into his ride, allowing Louis to possibly walk away with the world title with his re-ride.

Looking back, the Chinle bull rider said he should have covered his final bull, but midway through his ride he got himself in trouble.

“That bull kind of sucked back, and my foot just came up on the inside,” he said. “It was a little too far forward, and it cost me in that last ride.

“I’m just glad that it all worked out for me,” he added.

Tsosie tallied 299 points, while Betony finished with 298 and Charley with 293.

The trio finished behind event-winner Steven Dewolfe (313) and Jayco Roper (305).

Tsosie placed in every round, with his best finish coming in the second and third rounds when he tied for fourth place.

The latter two earned two checks each, with Betony taking first in the third round with an 84-point score.

Charley’s best finish came in the second round when he tied for second place with a 770-point ride.

Cauy Betony placed in three rounds with a pair of second-place finishes in the first and second rounds.

The younger Betony, however, was bucked off in the second round as he did not place in the aggregate race.

He earned a check in both of his rounds.