With the survey set to expire this morning, members of the Navajo Nation Rodeo Association will know what’s to come for the 2020 season.

At issue is whether the NNRA should sanction a rodeo season this year in the midst of the COVID-19 pandemic and send a representative to the Indian National Finals Rodeo, which is scheduled Oct. 20 to 24 at the South Point Equestrian Center in Las Vegas, Nevada.

The survey, which was released earlier this week, asks members if they “are in favor of (the) NNRA proceeding to host a qualifier to the INFR this year?”

“I want to know if they are willing to rodeo this year with the pandemic going on,” Smith said. “Or if they’re willing to take their membership into the 2021 season.” 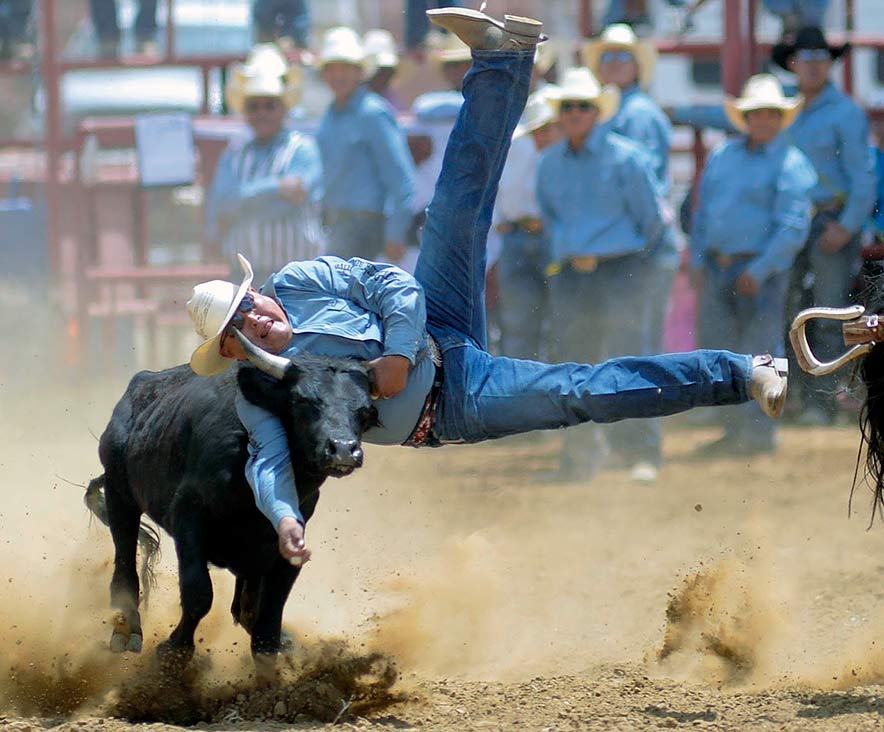 Emerson Long Jr. grabs a hold of his steer during an NNRA sanctioned rodeo last summer in Pine Hill, New Mexico. The NNRA is weighing its option on whether they’ll have a rodeo season this year.

Smith said the association has 292 paid members and he’s hoping many of them will respond before the deadline as he is scheduled to release the survey results tonight during a conference call meeting with the INFR Board of Directors.

“I’m interested in the results,” Smith said. “If many of them say ‘yes’ we’re going to put on this finals.”

But if half of the members respond “no” to the survey, Smith said the NNRA is going to forego the upcoming season.

The survey, Smith said, is in response to the INFR as some affiliates have expressed an interest in continuing the rodeo season.

In a press release dated May 6, the INFR board is giving its 13 region members up to June 1 to notify the INFR about their decision on whether they will opt out of the 2020 season.

“The INFR board has had two conference calls over the past month with region presidents to discuss the 2020 season,” the press release states. “Most regions were optimistic about having a rodeo season. Since pandemic restrictions differ geographically, we have given each region the option to participate this year or to simply opt out and hold off until next year to host any events.”

In their proposal, the INFR stated that they’ll waive the $3,000 region fee, waive the $1,500 saddle sponsorship, waive the six rodeo tour rodeo count and waive the 50 member count.

The INFR, however, will keep all INFR membership dollars if the respective region decides to have a rodeo season.

With that, the INFR will host the world finals in Las Vegas. And if need be, they’ll host a qualifier rodeo.

In the press release, the INFR said they’re looking to scale back the world finals with limited resources and only 20 qualifiers.

“We understand event sponsorships and membership numbers will be low, so we are being realistic with our event planning,” the statement read, while noting that this applies only to the 2020 season.

As of Tuesday afternoon, the NNRA had 31 members respond to the survey with 19 shooting down the proposal.

“That’s very interesting,” Smith said, while adding that he’s waiting for the final tally on Thursday.

But if a majority votes “yes,” Smith said they are proposing to host one INFR qualifying rodeo on the third week of August in either Holbrook or Cortez, Colorado.

Those two sites, Smith said, will have eased restrictions in the coming weeks.

“We’re planning around that but it’s going to be based on questionnaire,” he said.

In the past few days, Smith said he’s gotten feedback from some members with some weighing in with their thoughts.

“I’ve had some that want to rodeo and some that don’t want to,” he said. “I’m trying to stay neutral. I need to respect both sides so I’m just waiting for the final report.”

As for the association in Oklahoma, the Arrington McSpadden All Indian Rodeo Association is planning to schedule a few rodeos this year, including this weekend’s 2nd Annual Short Foreman Memorial Region 8 Indian Rodeo on Saturday at Cedar Tree Arena in Kansas, Oklahoma.

Smith said he’s not sure about the two associations in Canada, the Great Plains Indian Rodeo Association and Northern Alberta Native Cowboys Association.

“The border is still shut down and they can’t cross over,” he said.

Smith said another thing that was discussed during the conference call with the INFR is the membership card.

With a membership card, he said any contestant can rodeo at any of the 13 regions but due to the pandemic some tribes may impose restrictions to nonmembers.

“Say we go to another region and their tribe says no outsiders,” Smith proposed. “What are we supposed to do? To me we’re just losing out on this consequence.”

Other than the NNRA, the Great Plains Indian Rodeo Association in South Dakota is weighing its options as well.

“We’re trying to figure things out and if we had a season what would it look like?” GPIRA President Troy Heinert said, while adding that they are going to have a conference call with their event directors next week to determine if it’s feasible to rodeo this year.

“One of the things we’re talking about is are we comfortable bringing people from all over the country onto our reservation,” he said. “That is something that we need to weigh in on, and obviously talking with the corresponding tribal governments as to what’s going to be allowed and what’s not going to be allowed.”

Heinert said most of their fairs are held in late July and August and so far they have had one cancellation, the Oglala Nation Fair & Rodeo.

“There is just a lot of unknowns right now,” he said.