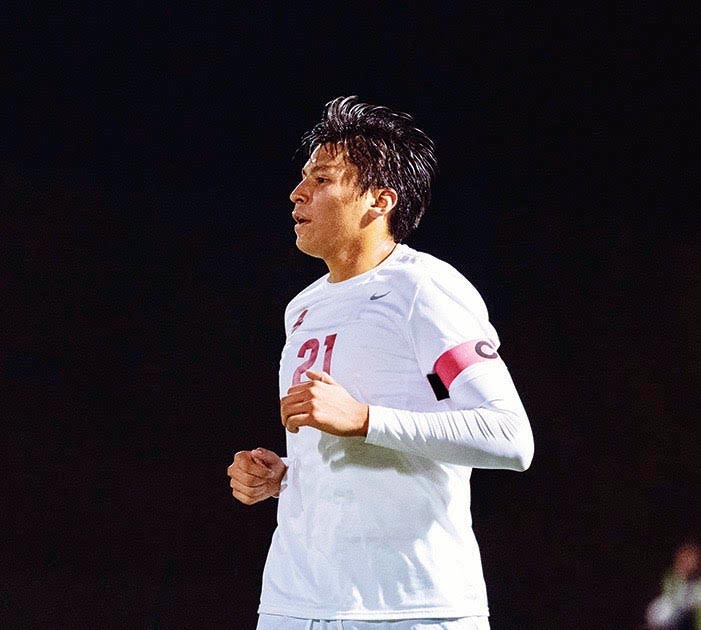 Submitted | Theresa Tsosie-Robledo
Jaren Robledo played for the Southern Knights out of Southern Virginia University and is set to graduate this year. Originally from Albuquerque, he is proud of his Navajo heritage and is happy to get his degree after years of balancing collegiate work and soccer games.

“It feels good,” Robledo said. “Took a little longer than expected, but it’s here. I did it, and I’m excited. I’m just looking forward to get going on with my professional life.”

Robledo was raised in Albuquerque and started playing soccer at 4 years old. As the years went by, he played basketball and baseball, but his passion continues to be soccer, something he hopes he can continue playing after college.

“I think what I find so appealing about it is that it’s a team sport,” he said. “I’m very much so a team player when it comes to passing the ball, but I think finding chemistry within a team is kind of special, and that’s what makes soccer kind of my favorite. Is just this team element.”

He played defender and believed his greatest strength is maintaining composure, being patient on the ball, and making the right pass; to work smarter and not harder in any situation.

He knows that soccer isn’t a popular rez sport, but with its influence growing across the U.S., he hopes to see more kids from his community playing it.

Robledo is very close with his family, saying that they have inspired him and supported him in everything he does, from sports to music. He is proud of his culture and family. His middle name Kenneth came from his grandfather, Navajo Code Talker Kenneth Tsosie from Sawmill, Arizona. He is also related to Samuel H. Begay, one of the original code talkers who was a brother to Robledo’s grandmother.

“It is very special to me knowing the role that they played during World War II,” Robledo said. “The fact that they were one of the reasons why the U.S. was successful in the Pacific was due to the gift of the Navajo language, (which) is unique, and I wish more people knew the importance of what they did.”

He is also a passionate musician, having played instruments in high school. He played trumpet for his school’s marching band and jazz band, but lately, he has been playing guitar and is currently playing with “Side Montero,” a group composing young musicians who enjoy making music.

Side Montero played together for years despite some of their members, like Robledo, going off to college.

He graduated from La Cueva High School in 2016 and received a scholarship to play for the Southern Virginia University’s soccer team, the Southern Knights.

“I think the fact that not many Navajo kids get to do what I’ve done kind of inspired me and motivated me because, you know, why not?” Robledo said. “Like there’s nobody really holding me or any future Indigenous kids back from following their dreams and what they want to pursue. And so that was kind of a big motivator.” 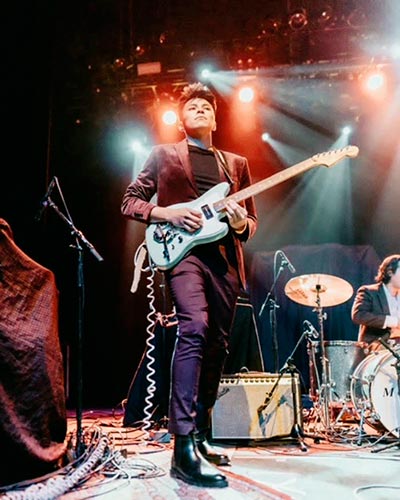 Submitted | Theresa Tsosie-Robledo
In addition to being a collegiate soccer athlete, Jaren Robledo is passionate about music and is looking forward to playing with the band Side Montero at this year’s Gathering of Nations.

He studied for about five years, with one semester being interrupted by the coronavirus pandemic.

He almost missed playing his final season because of an injury. Still, ironically, thanks to the COVID lockdown, they had a delayed season, giving him time to recover and play in his senior year.

Playing during the COVID season was difficult as the team were constantly tested for COVID. Games were canceled, with some scheduled at the last minute.

Often, the team had to quarantine because of outbreaks on campus. It was a frustrating time as they didn’t have much chance to improve or build the team spirit, but looking back, Robledo says they were lucky to have played at all as many schools canceled their sports, and many seniors missed out playing their senior year.

Robledo knows he owes a lot to sports as he learned many lessons from it through the years. He learned to be competitive, something that brings out the best of him and other healthy work ethic, saying he attributes a lot of his personality to sports.

While playing for the Knights, he was sure to keep up his grades, receiving the All CAC (Capital Athletics Conference) academic award and being placed on the dean’s list.

He’s excited about graduation and looking forward to his life’s journey.

He’s planning to appear at the Gathering of Nations and perform with the band Side Montero. He encourages people to come out and listen to their music. They have written songs based on their experience growing up, going to school, and the recent pandemic, and they are excited to share them with others.

Either way, he had a good time in college, saying it helped him reach his goals and gave him many new opportunities.

“It was great; it was fun,” Robledo said. “I learned a lot about myself, about how I work and how I operate because when you’re balancing practices, games, traveling, papers, school and all that, it’s a taxing thing to do, and to do it for years; it can get challenging.”