5A runners have ‘off-day’ at state meet 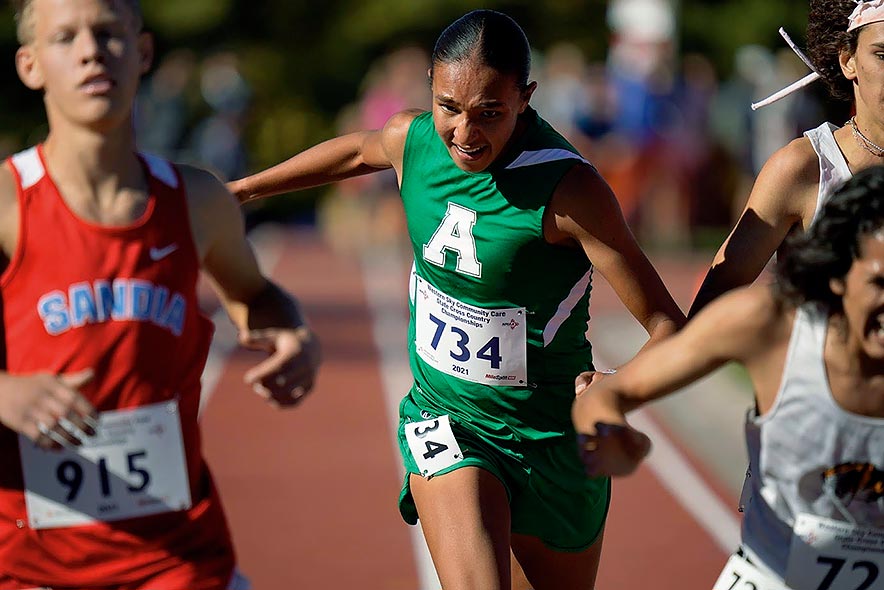 At the pre-state meet in mid-October, the Class 5A runners were pacing at or near the 16-minute mark.

On Saturday, the runners in the largest school classification were far behind that threshold at the 2021 state meet, which was run on a slightly different course.

“Everyone had an off-day,” Albuquerque High runner Bahozhoni Church said. “Everyone’s time was behind like 20, 30 seconds, even the state champ.”

Sandia junior Steven West won 5A title in 16 minutes, 0.16 seconds, which was 31 seconds off his pre-state mark he set last month.

As for Church, the Diné and Pokagon Band Pottawatomie runner clocked in at 16:41.27, which placed him seventh overall.

“I’m happy that I got another state medal,” Church said, while adding that it was odd that top 5A runners ran at a slower pace.

“I’ve had a bunch of ups and downs,” he added, “but it’s good that I finished in the top ten.”

At pre-state, Church took seventh and on Saturday he finished in the same spot.

“I was going in with the plan to get top three,” he said. “With my time at pre-state (16:19.10) I would have gotten third place. Today was just off for me and everyone else.

“My health felt good,” he continued. “It was just fatigued legs and you can’t really do anything about it.”

“The first mile I think I heard 5:13,” Toya said, who is a member of the Jemez Pueblo and Jicarilla Apache tribes.

“I ended up running a seventeen-flat, so I knew that it wasn’t as fast,” he said.

Toya actually crossed the finish line at 17:03.66, which earned him All-State laurels as he placed 10th overall.

“To be honest I wanted to finish in the top three, or top five,” Toya said.

The Cleveland squad was looking for a five-peat in the team championships. The Storms placed third with 98 points behind state champ Volcano Vista (59) and reserve champion Rio Rancho (93).

“At least we got something,” Toya said. “We’ve been doing well these past couple of weeks and we got third.”

The Storms lost the service of junior Blayne Howell (Northern Arapaho) who was carted into the stadium with an injury.

Sophomore Madison Germaine, who placed 34th, paced Farmington. As a team, the Lady Scorps took ninth with a team score of 237 points.