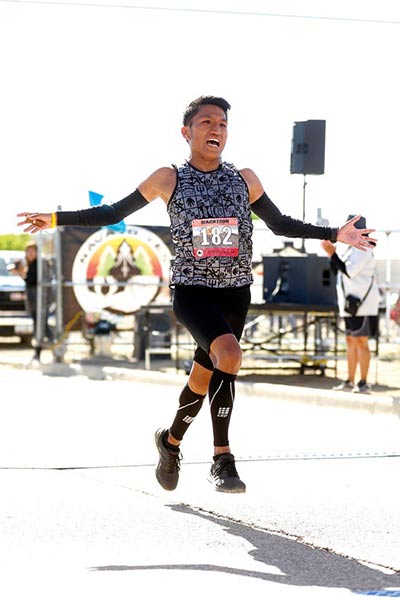 Kyle Sumatzkuku of Tuba City, Arizona, wins the 2019 Shiprock Marathon men’s title with the time of 2:38.08 on Saturday, May 4, in Shiprock.

Every stride that Kyle Sumatzkuku took on Saturday in the 26.2-mile Shiprock Marathon was taken in prayer.

The 22-year-old Hopi from Second Mesa, Arizona, earned his first-ever marathon win. He came in first in the men’s category in a time of 2 hours, 38 minutes and 8 seconds.

Sumatzkuku said it was a surreal first-time experience.

“It was pretty emotional for me,” he said. “Coming from being full-blooded Hopi, it’s always contributing to prayer. Going out, making prayer for all living things, that’s what I reflected on.”

It was the first time Sumatzkuku ran the Shiprock Marathon – or any marathon, for that matter.

A young, up-and-coming runner, Sumatzkuku said it was a humbling experience.

“It was good, the venue is absolutely amazing,” he said. “It was just a good turnout for me, I honestly enjoyed it. For me, this is a huge gig … this is kind of like my first full marathon ever.” 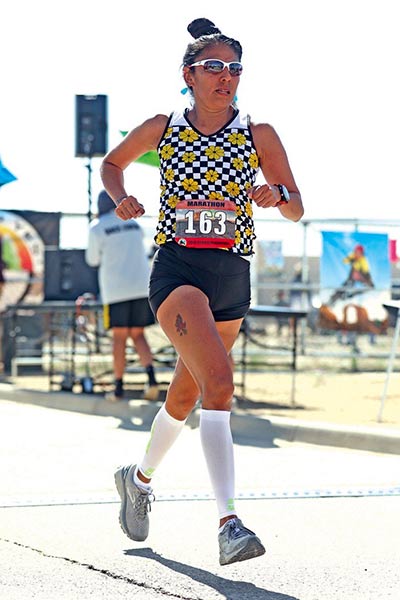 Caroline Sekaquaptewa of Tempe, Arizona, wins the 2019 Shiprock Marathon women’s title with the time of 3:21.21 on Saturday, May 4, in Shiprock.

Sumatzkuku led for most of the race and ran with two other experienced runners.

He paced himself with Andrew Yazzie, who finished second in 2:43.50, and Anthony Francisco Jr., who finished in fifth (2:57.55). He had hoped to break the course record of 2:34.59 (set by local runner Shaun Martin) but fell just short.

“Overall, I feel satisfied,” Sumatzkuku said. “I did have a goal just to get 2 hours and 20 minutes, but I was running with Andy and Anthony Francisco – they’re really good running mates of mine, they’re pretty much studs.

“I just kept my cool with them because they’re older than me and they’re veterans in the marathon,” he said. “I learned from them.”

Sumatzkuku averaged about six minutes a mile, according to his chip pace.

He said he made sure to run a smart race, especially in challenging areas.

“It was smooth coming down, but there were a few rolling hills,” Sumatzkuku said. “It was just keeping my cool, keeping it well maintained and, overall, just don’t push over the rolling hills because it’s tiresome. But midway, it was just all downhill.”

Sumatzkuku said he had always wanted to run the Shiprock Marathon but had to make sure he was ready.

“I just built that solid foundation with high volume workouts,” he said. “My workouts would go between eight and 10 miles. Usually my long runs would be 17 to 18 miles max. Overall, I run 100 miles every week.”

For the female marathon winner, Caroline Sekaquaptewa, who is also Hopi, she had run the Boston Marathon in April and decided to use her training for one more.

“This is kind of an add on,” she said. “I trained for Boston so I had all my training towards that and I ran that. Then a couple of friends were running this so I just kept going with them.

“I just like the vibe,” she said. “It’s always fun to see all the runners along the course … then you catch up to the half-marathon people, so that kind of keeps you going and the course is challenging.”

Sekaquaptewa finished the race in 3:21.21. It was her second win. She won her first Shiprock Marathon in 2016.