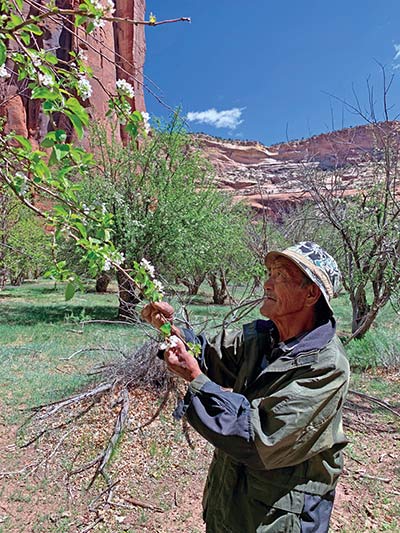 On his first visit to his orchard this year, Lloyd Draper inspects an apple tree.

Deep in Canyon del Muerto — so deep that, this time of year, the only way in is a precipitous scramble from the rim — is a well-kept secret.

The keeper is a wiry 58-year-old with kidneys so bad he’s on the waiting list for a transplant.

But don’t underestimate Lloyd Draper, Ashiihi born for To’Aheedlíinii — at least until you follow him down the hair-raising trail that includes a rappel from a rusty chain embedded in the rock and two hip-deep fords across the snowmelt-swollen wash.

There, at the very end of the Canyon del Muerto road (when it’s passable; right now it looks more like a river), you will find Draper’s legacy: neat rows of big, gnarled apple trees, about a hundred of them.

The trees were planted by Draper’s grandfather, Philip Draper, who studied horticulture at Carlisle Indian School around the turn of the century and brought the knowledge home. Lloyd doesn’t know how old they are, but they were already old when Arizona Highways magazine discovered them and Philip on a visit to Canyon de Chelly in 1959. Lloyd has the issue. He pulls it out and looks at it from time to time. It keeps him focused on his mission, which is to keep the trees alive and producing.