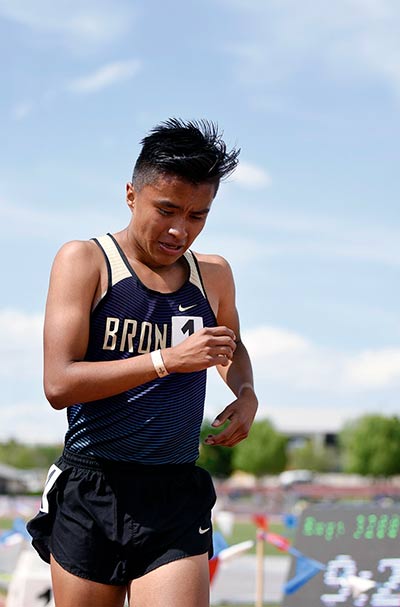 Navajo Timesfile photo
Kirtland Central Bronco Kashon Harrison catches his breath after finishing the 3200-meter race in first-place with a time of 9:26.42 last May during the New Mexico Class 4A state track meet in Albuquerque.

Harrison, who runs for Colorado University, placed seventh in Salt Lake City at the Mountain West finals, but at the NCAA Championships he fell to 90th place overall.

Harrison completed the 10K run in 31:55, but while he was the No. 2 finisher for the Buffalos a week earlier, in the NCAA Championships was the fifth place runner on the team.

“I did pretty bad,” Harrison said of his performance. “But I still got the chance to run in the NCAA championships.”

Harrison said that it was pretty bad at the race with heavy rain making mud and rough running conditions.

Still for his freshman year he said that he was feeling pretty good about it overall.

“It takes a lot,” he said of competing at the college level. “You have to put the work in. It is very much more a team aspect.”

He said that every athlete on the team trains and builds to become better and help the team.

Northern Arizona was unable to defend the national title for a second straight year, as BYU ended their hopes of a three-peat, scoring 109 points to win the national title. NAU was in second with 163, just edging out Colorado, who finished third with 164.

Winning the race was Edwin Kurgat from Iowa State with a time of 30:32.

In the women’s 6K run UNM’s Weini Kelati was the national champion with a winning time of 19:47.

Arkansas won the women’s national title with 96 points. They were followed by BYU in second with 102, and Stanford in third with 123. The NAU girls came in 14th with 406 points.

Harrison said having a runner like Klecker on his team gives him and the rest of his teammates somebody to look up to.

“I love my teammates,” he said.

As for adjusting to the college life he said that this first year has been a great experience.

“Everybody tries to help you succeed at the same time to try and be an athlete,” he said. “There has been a lot of good help at CU.”