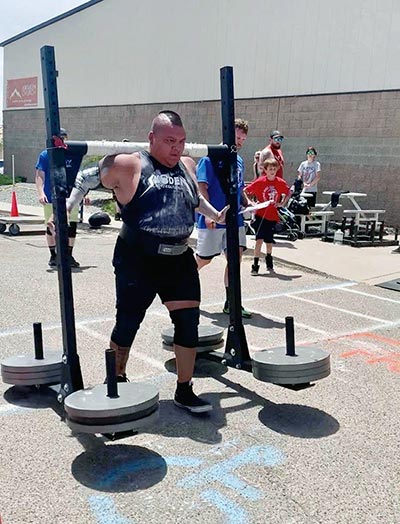 Coming in first in the men’s super-heavyweight in his weight division is Mathias Milford, a young Diné originally from Fort Defiance.

“I felt like I achieved a certain level of determination, staying motivated (throughout the competition),” Milford said. “I was in a pretty good realm of positive emotions, getting this first-place finish and knowing that I was able to qualify for nationals.

“A lot of good hard work has paid off, and I was able to see that throughout the competition,” he said. “So, definitely overjoyed and blessed and happy and glad to be able to be where I’m at physically and mentally.”

Milford had to compete in five different events in his division, each being scored by time or by how much he could lift. It was a tough race, and he had to fight through each event while maintaining his focus and stamina to pass the next one.

He credits his victory to the lifting techniques he used, his focus on endurance, and the overall strength he built up in the past five months.

“I wasn’t really able to take my foot off the pedal, so to speak, so I just stayed strong from the first event and finished out through all five, and it was definitely tough,” he said. “A lot of heavy weights and working on techniques, but everything panned out the way I had hoped and had trained for.”

Milford started weightlifting about eight years ago, starting in high school and building on it during college until he got his degree in exercise science. Today he is a professional personal trainer who occasionally takes part in strength competitions.

Growing up, he played baseball, football, and basketball, having a competitive side that grew through the years. When he started weightlifting, he found a challenge, which steadily increased until weightlifting and testing his strength became a part of his lifestyle.

“It’s kept me motivated, not only for the gym but also going through life,” Milford said. “It’s kept me pretty well rounded, and I’m always setting goals. So, goal setting has definitely taken place within the lifting but also is definitely transferable to life goals as well; it really does go hand in hand.”

Back in college, he would lift weights to stay fit, but then he’d watch weightlifting competitions on TV, seeing prominent, strong athletes pulling airplanes or lifting tractor tires, making him wonder if he was strong enough to do that. Those questions and his self-motivation inspired him to take on these types of competitions.

Milford’s life was unbalanced by the COVID-19 pandemic when gyms, facilities, and weightlifting events were closed during the first few months.

However, he bought his equipment, was able to keep up his training, and despite the unexpected break caused by the pandemic, he kept his strength up and continued to compete.

His goal has always been to get to nationals. Reaching that point now is like a dream come true for Milford. He always placed in competitions, but this was his first time coming in first place overall, and he will now be heading to nationals, which will be held in Dallas-Fort Worth, Texas, in June 2023.

“I definitely feel like I’ve climbed the first hill, and now I’m getting ready to climb the mountain,” Milford said. “I have a little under one year until nationals to really prep and train.

“But I’m still a little bit in shock and awe,” he said. “Being at this point but knowing that I do have quite a bit of work to do to get ready for that competition and to be at that level.”

It gives Milford a sense of pride to compete in these events and to represent the Navajo Nation as he does so. He knows he’s not the first Diné to enter these strength contests and that there are several Navajo who compete in these contests but knowing he will be representing his people at nationals always prompts him to do his best.

“It’s a little more of an added motivation factor,” Milford said. “Knowing that I come from a Native American reservation and when I go to some of these competitions and being the only Navajo, I do feel like representing the Navajo people as a whole as well as myself.

Milford is excited to head to nationals next year but saying the journey he has taken to get him to this point has been enjoyable. Though he celebrates reaching his goal with friends and families, he is always eager to see how far he can get. He still wonders how a side activity that was supposed to help him stay healthy and fit grew into a passion that led him to the national strength competition and hopes to inspire others to try weightlifting so that they too can live healthy lives.

“I feel like being able to compete in the sport, I’m definitely able to benefit not only in my physical journey but also my mental, emotional and spiritual journey as well,” he added. “So, it’s definitely something that I’m enjoying, and I feel like a lot of others can enjoy it as well.”