The Cowboy Christmas run from two weeks ago didn’t go as planned for Rooster Yazzie. 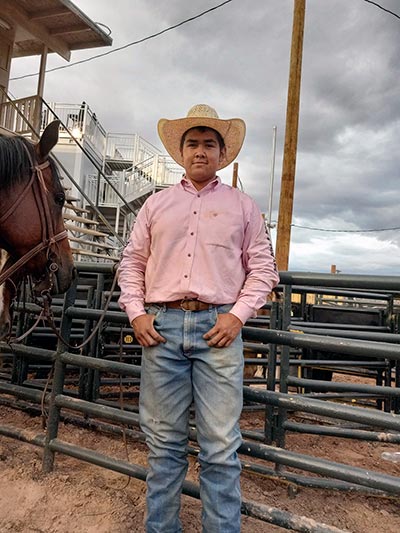 The Coyote Canyon, New Mexico, cowboy did not yield a paycheck in the four rodeos he entered.

Despite those setbacks, Yazzie’s body of work has been nothing but extraordinary for the 2022 PRCA season.

Yazzie has been a member of the PRCA for the past three seasons, including the first two as a permit cardholder.

Last year he fulfilled his permit and earned a trip to the circuit finals in Camp Verde, Arizona, finishing third in the season standings with $5,838 won.

At the finals last November, he recorded two of the three runs, including a first-place win in the opening round with a 4.2 run.

He added a 4.0 run in the second round for second place before stumbling in the next round. Nonetheless, he earned a fourth-place finish in the average race with an 8.2 aggregate on two heads.

“I had a little mishap, and it cost me,” Yazzie said of his third-round steer.

Despite that, his exploits at the circuit finals earned him $4,003, which counts in this year’s season standings.

Yazzie has added three other top finishes for the 2022 season. He won the Cave Creek Rodeo Days with a 3.7 run in late March for a $2,041 paycheck.

In June, he added the championship title at the Pioneer Days Rodeo in Clovis with a 4.9 run that paid him $1,343.

Four weeks ago, he split the win in the aggregate race at the Rodeo de Santa Fe with Cimarron Thomas as the pair threw down two steers in 10.0 seconds.

“A lot of times, it comes down to the draws,” Yazzie said. “When you have a good one, you got to use it and do the best you can. You gotta stay sharp, and you can’t step on your own toes.”

Yazzie is looking forward to the rest of the season and he’s not going to letdown.

“I’m trying to,” he said of running away as the circuit frontrunner. “I really don’t want to give them any breathing room.”

With more prorodeos on his docket, Yazzie said he’s shying away from the Indian rodeos this year. Nonetheless, he still wants to qualify for the Indian National Finals Rodeo in late October.

“I’ve entered in over 20 prorodeos,” he said. “I even got entered into Reno this year, but that didn’t go too well.

The recent Reno Rodeo had a $693,561 purse, which is billed as the fourth richest PRCA tour rodeo.

Yazzie said he’s hoping to get entered in more rodeos like that next season.

“Some of them are by invitations,” he said of the big rodeos. “Most of them have already passed already, and hopefully, next year, I can get into those ones.”

Unlike his first couple of seasons in the PRCA, Yazzie said nothing surprises him.

“When I first started, I dealt with nerves, but now I’m over it,” he said. “Now, I just try to work with the mental side of things because that’s what it’s mostly about.”