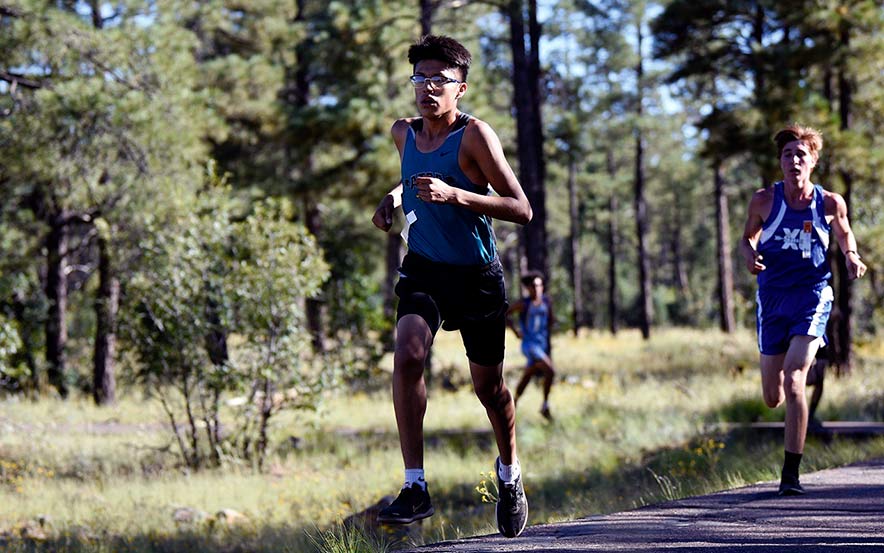 While trying to get a feel of his competition, Piñon runner Daniel Biakeddy trailed early at the Shane Morris Invitational.

The Piñon sophomore had to work his way up to the lead pack after he started the 5K-race at a slower pace last Saturday at Woodland Lake Park in Pine Top, Arizona.

Biakeddy passed at least 20 runners in the middle of the race as he finished third overall behind meet winner Jacob Urrea of Safford and reserve champion Beau Williams of Show Low.

“I started off slow but I already knew that everyone else was going to die out,” said Biakeddy, who clocked in at 17 minutes, 59 seconds.

Piñon second-year coach Adrian Herder is hoping his pupil will change his racing strategy as they enter the second half of the season.

“His strategy is crazy,” Herder said. “He wants to hold back and finally take off in the middle of the race. I’m hoping that he does step it up in the next few races, that way he stays up there instead of taking off before it’s too late.”

At the Shane Morris meet, the Piñon coach noticed Biakeddy got off to a slow start as that course narrows at the start of the race with runners exiting a softball field through a narrow gate.

“I’m not a big fan of that,” Herder said. “In practice, we did some speed workouts and I told him to go out fast. For this race it was kind of too late for him to catch the two runners in front of him.”

Nonetheless, Herder is excited to coach Biakeddy, who transferred to Piñon High after spending his freshman year at Greyhills Academy.

“He is one of those crazy athletes that mentally – he can do it,” Herder said. “He doesn’t worry too much about his body and if he wants it he’s going to go for it.”

With no running experience prior to high school, Herder said he’s surprised with how far Biakeddy has come.

“This is his second year running so I’m surprised with his endurance,” he said. “He’s just one of those natural athletes that can pick up things fast.”

With his time last Saturday, Biakeddy broke the 18-minute mark for the first time this season. Based on that, Herder said he’s got a big future ahead of him.

“My goals for this team is to make state,” Herder said. “A majority of our runners are sophomores and I think it’ll be good exposure for them to make state. Hopefully when they become seniors we’ll be back up there like we were in the 2014, -15 and -16 seasons.”

Herder said they need to close their running gaps between their first and fifth runner but he’s looking forward to the rest of the season.

“We were missing one of our runners and once we hit the Desert Twilight (this week) we should have our whole team available,” he said. “I think we can show our true potential down there with our whole crew.”

The Shane Morris meet was Piñon’s fifth meet this season and, based on what they’ve done, Herder believes his squad is somewhere in the middle of the pack in sectionals behind powerhouse Hopi and Northland Prep.

In addition to those teams, the Piñon coach said Alchesay and Many Farms are up there.

“I honestly think we’re in the top six,” he said. “We went to the Many Farms meet earlier this year and we got demolished over there. Their seventh runner finished ahead of my No. 3 runner.”

But at the Canyon de Chelly meet the following day, the Piñon squad beat Many Farms by 154 to 172 count.

“I believe we’re right up there with Many Farms,” he said. “I think we’re probably neck-and-neck with them. I’m thinking that we can make state.”