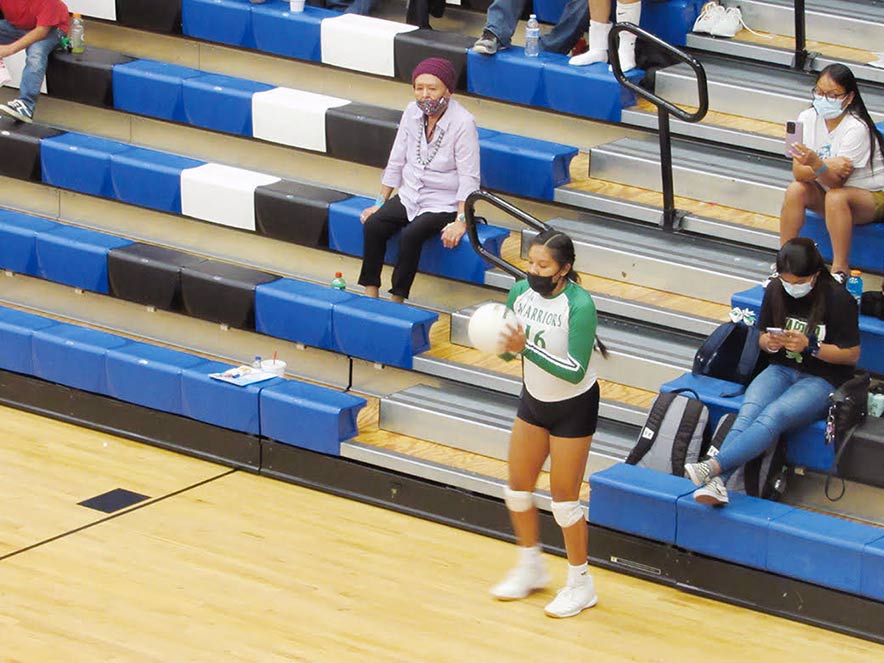 Navajo Times | Quentin Jodie
Tuba City outside hitter Kayleigh Numkena gets ready to serve the ball against Chinle in pool play action at the Snowflake volleyball tournament on Sept. 17.

Given its tough start the Tuba City Lady Warriors are looking to find some rhythm going forward.

The Warriors have compiled a 4-3 record, losing to some quality teams at the 3A level.

The storied program is looking to be one of the 24 teams to get an invite to the Arizona 3A state volleyball tournament under new head coach Brittany Laughter.

“We’re young and we started out unbalanced,” Laughter said on Friday during the Snowflake volleyball tournament. “I feel like we are not quite there yet, but we can be, maybe in the next couple of weeks. I feel like we’ll start to come around.”

Like most reservation schools, Tuba City didn’t have a season last year. Nevertheless, a handful of them stayed in the game by playing club.

Senior middle hitter Trista Bennett and junior Ellyce Begay did so by joining the Shonto Starlings.

“I did some camps, and I just stayed busy playing volleyball,” Begay said. “I joined the Shonto Starling to keep myself in shape.”

With the same motive, Bennett also got involved with the Shonto Starlings.

“During quarantine I was asked to play for them, and I went that way,” said Bennett, who played for the Tuba City Starlings in years prior.

“I think playing for Shonto and coach (Harrison) Miles helped me with my game,” she said. “I’m grateful for him because I wouldn’t be the player I am today.”

All told, Laughter said she had four girls in the club scene while the rest sat out because of the pandemic.

Being away from the game has the Warriors playing out of rhythm but the Tuba coach remains optimistic.

“We’re still competitive and honestly I’m very happy with the improvements we’ve made since at the start of the season,” she said. “I think we’re starting to find our form. We’re just trying to get them back into the movements.”

Bennett said the past few weeks the team has undergone some adjustments. Nonetheless, they’re working hard.

“It’s a new team and we’re still working on building our chemistry,” she said. “Compared to most teams we had a late start. We’ve only been playing together since August, and we’ve come a long way.”

“We haven’t played together for that long, but I think we’re clicking as a team,” she said. “The chemistry is coming together and we’re talking more.”

At the Snowflake tournament, Tuba City won its pool over Chinle, Mesquite and St. Johns and they played in the gold bracket.

The Warriors won its opening round match with a 2-1 win over 3A North Region rival Page. Tuba City, however, came up short to eventual champ Snowflake and second-place finisher Thatcher, ending its tournament run.

On Tuesday, Tuba City beat Sedona Red Rock in four sets as they are set to play in the Epic Tourneys Volleyball Invite down in the Valley.

The Warriors will be paired up with Ben Franklin, Show Low and Rincon University High School in one of the eight Platinum pools.

Following that mega tournament, the Warriors will host chief rival Monument Valley on Oct. 5 in its 3A North opener.

“I have high expectations for our team,” Laughter said when asked about the conference race. “It’s going to be competitive, but I think we can do it.”

Before the pandemic hit, Tuba City won both the region and tournament titles under then coach Harlan Barlow.

With the departure of Barlow, Tuba City stayed in house by hiring Laughter as she served as the assistant coach for seven seasons.

“She’s a good coach and she knows us really well,” Begay said of Laughter. “She has experience and what I like about her is she encourages us every time.”

“We’re very familiar with her,” Bennett chimed in. “I also played under her for our club team and I’m happy that she took over. She’s a great coach and I’m comfortable around her.”