Tuba City netters look to ‘write their own story’ 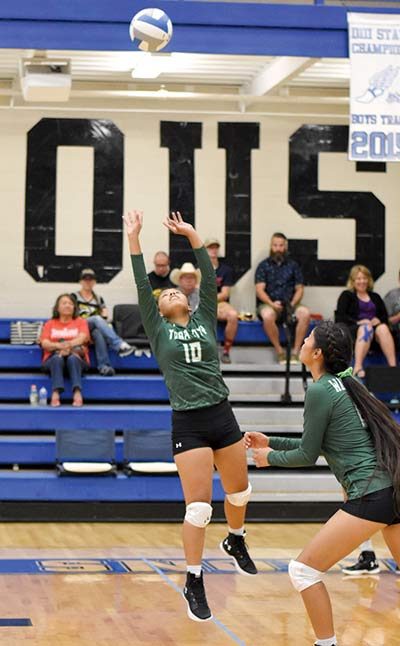 There’s something different about this year’s Tuba City volleyball team.

In two high-profile tournaments, the Lady Warriors had a respectable showing at both the Coconino and Snowflake invitationals. At both tournaments, Tuba City won their respective pool and played in the gold bracket.

Two weeks ago, Tuba City reached the championship game of the Coconino tournament and lost the title to Flagstaff High, a team they had beaten in bracket play.

Last week they finished third at Snowflake, losing to Gilbert Mesquite, 2-1, in the semifinals of the loser’s bracket. In the opening round of bracket play, Tuba City beat Mesquite 2-0 before sweeping host Snowflake by the same score in the next round.

In the semifinals of the winner’s bracket, the Lady Warriors were sent to the elimination bracket after losing to Thatcher, 2-1. Mesquite, a 5A school, won the tournament.

“We did exceptionally better than last year,” Tuba City coach Harlan Barlow said. “Last year we were knocked out in two games but I think we’ve learned from that.”

Barlow said the goal this year is to do better than what they did last year. Based on their two showings nobody can question the Warriors’ ability to seize the big moments.

“I think we’ve let people know that we can compete,” said Barlow, who added that his team has yet to reach its potential.

When pressed to elaborate, Barlow said his team is made up of a mixture of veterans and newcomers. Besides the returning lettermen, the team boasts five freshmen, the most he’s allowed on his team in his nine-year tenure.

“We had five seniors graduate last year so those positions opened up,” he said. “I knew it was going to be hard to replace those seniors but they all found a way to fit into our varsity program.”