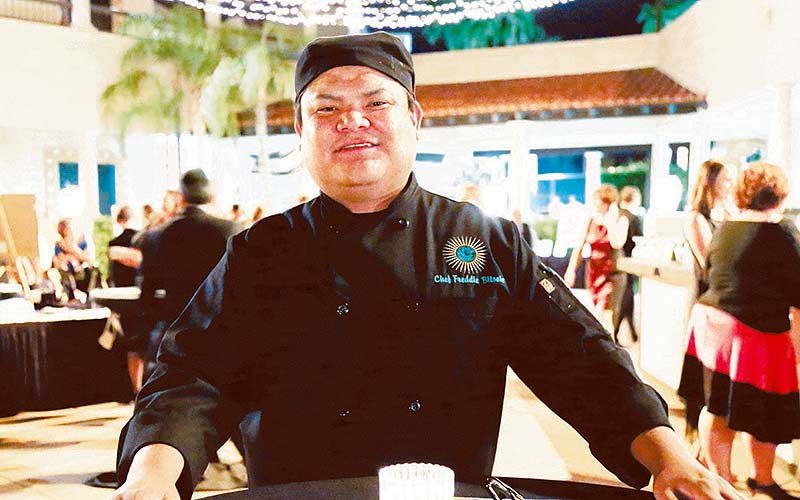 Navajo Chef Freddie Bitsuie takes a moment for a photo opportunity during the 2015 Silver & Turquoise Ball held in Scottsdale recently. (Special to the Times – Roshan Spottsville)

Navajo Chef Freddie Bitsuie takes a moment for a photo opportunity during the 2015 Silver & Turquoise Ball held in Scottsdale recently. (Special to the Times – Roshan Spottsville)

If you were to make chef Freddie Bitsoie’s life into a movie, here would be the pivotal scene:

Bitsoie’s archeology professor at the University of New Mexico pulls him aside and says, “Do you realize all your research papers are about food?

Food systems, food storage, trading and food … If you’re that interested in food, maybe that’s what you should be studying.”

Bitsoie shrugs it off as coincidence. “I don’t think I’m that interested in food,” he protests.

He goes home to his little student apartment and switches on the light.

“There’s my KitchenAid mixer on the counter. There are my knives in their rack on the wall,” Bitsoie, 39, recalled. “I started asking all my friends, ‘Do you have a KitchenAid mixer?’ They were like, ‘No! Why I want one of those?’

“I realized maybe I was into food.”

Just before his senior year at UNM, where he was majoring in anthropology, Bitsoie dropped out and signed up for culinary school in Scottsdale, Ariz. He worked for a while as a cook at a motel restaurant — “Best eight-dollar-an-hour job of my life” — and then transitioned into teaching at another culinary school.

That’s when he realized Native American food is the Rodney Dangerfield of cuisine — it gets no respect.