50 Years Ago: Federal court rules in favor of DNA director

Annie Wauneka was visibly angry when she met with a reporter for the Associated Press on March 1, 1969. 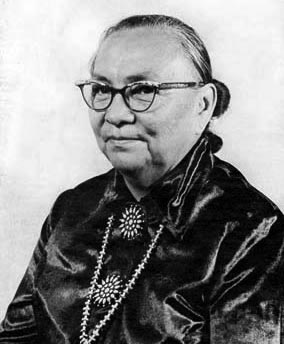 “The federal court has no right to tell the Navajo Tribal Council who should be allowed to come onto our reservation,” she said. Two days before that meeting, a federal court judge in Phoenix, Walter Craig, ruled in Ted Mitchell’s favor, telling the tribe they had to allow him back on the reservation so he could continue his duties as director of DNA-People’s Legal Services, the legal aid agency on the reservation.

Three months before that ruling, the Council had banished Mitchell from the reservation for showing disrespect to Wauneka, a delegate of the Council. Wauneka claimed he had laughed at her while she was making a speech in the Council Chamber. When she heard him laugh, she stopped her speech, walked up to him and slapped him in the face. Mitchell later claimed that he was laughing at something one of his associates said and not at Wauneka.

The incident resulted in the Council passing a resolution the following day claiming that Mitchell was a dangerous person and, per their rights under the Treaty of 1868, they can ban dangerous people from the reservation.

During the next three months, Mitchell continued to direct DNA attorneys, first from his motel room in Gallup and then from a trailer set up at Tse Bonito, New Mexico, on the other side of the state line from Window Rock.

The Navajo Times has covered the story better than any other newspaper in the area, writing two or three stories a month as well as printing more than 20 letters to the editor, most of them saying the Council exceeded its authority. When Craig’s ruling came down, the Times not only published a long front-page story but it set aside five whole pages to print the entire ruling because of the interest shown by readers about the subject.

The ruling did not give Mitchell all he wanted. Craig denied the request for $10,000 from the tribe to pay for his expenses because he was forced to get a motel room in Gallup during the time he was banned from the reservation.

Harold Mott, the tribe’s general counsel, also objected to the ruling, saying it was a “serious blow to tribal sovereignty.” He said he would appeal the decision. The ruling did establish new legal perimeters on what the tribe could and couldn’t do regarding non-Indians living and working on the reservation.

Craig’s ruling took note of the fact that members of the Council had criticized Mitchell on a number of occasions during the year before they took their action to ban him from the reservation. The Council was upset at DNA attorneys who filed suit against the tribe or got involved in school board disputes, saying that these kinds of cases cost the tribe money to defend themselves.

This ruling, for the most part, ended the matter since the appeals court upheld the district court decision. But it didn’t prevent the tribal government from banning non-Indians from the reservation.

Over the next 30 years, there were at least two other occasions when a non-Indian was banned from the reservation, one of them a non-Indian who was living with a Navajo woman who claimed he abused her repeatedly and the other a government worker who was accused of abusing children. In both of these cases, however, the tribe went through judicial procedures to get the removals approved.

In other news, Navajo students at Intermountain Boarding School in Utah sent a letter to the Navajo Times protesting a recent story outlining serious problems at the school caused by student misconduct and the lack of supervision by the school. The letter said the article in the Times inferred that this was a problem caused by a lot of the students at the school when, in reality, only a few students were actually causing the problem and the school as well as the student council was trying to deal with the problem makers.

The story centered around a study done by three delegates of the Council who went to the school and found a lot of problems, including drinking on campus and illegal use of peyote. The Council delegates recommended the replacement of the school’s director and other staff who were in charge of student conduct. The students objected, saying the staff at the school was doing a good job and understood the needs of the student body. Bringing in new personnel would only create more problems, they said.

The students admitted that the problems mentioned in the article are occurring but pointed out that all boarding schools operated by the BIA were experiencing the same problems and were trying to deal with them. To single out Intermountain was unfair, they said. The solution, in their opinion, was for the tribal government to work with the school staff to address these issues and give them support, not criticism.