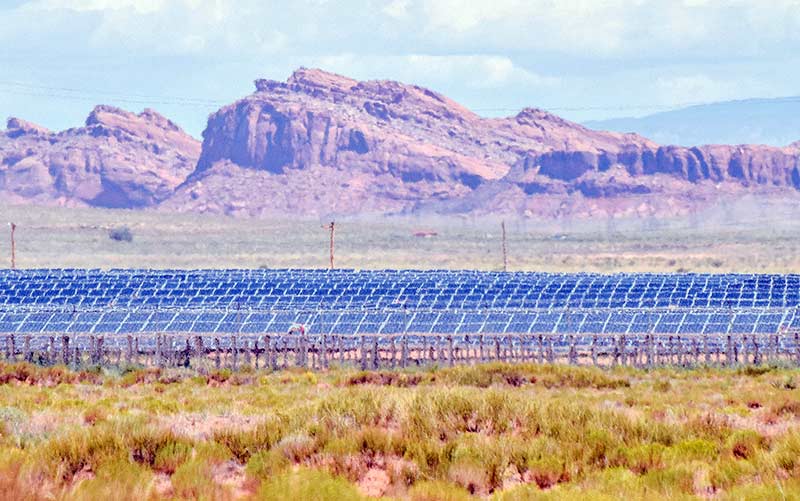 Navajo Times | File The Kayenta Solar Facility, located just north of Tódinéeshzhee’, gleams through the haze of heat on Aug. 24. The 27.3-megawatt plant is the first solar facility on the Navajo Nation.

Navajo Times | File
The Kayenta Solar Facility, located just north of Tódinéeshzhee’, gleams through the haze of heat on Aug. 24. The 27.3-megawatt plant is the first solar facility on the Navajo Nation.

(Editor’s note: This story originally ran Sept. 7. For our annual year-end edition, we’re rerunning some of the best feature stories of 2017.)

Ella Todacheenie knows that her grandchildren are the future. That is why she gave up 300 acres of her grazing land three years ago to let Navajo Tribal Utility Authority cover it with photovoltaic panels to power households, including her own.

“She wanted to be the first one to turn on the lights,” said Todacheenie’s granddaughter, Vanna Benally. “She’d (shout), ‘It’s coming!’ She was so excited, but she passed on.”

The Kayenta Solar Facility was officially dedicated Aug. 23, although it has been producing power since June. Todacheenie died in August 2015 at the age of 87. According to her granddaughter, she was a warm, generous and kind-hearted woman, who took a moment to look at the faces of her children and grandchildren three years ago when NTUA officials knocked on her door asking for land. The faces of her children spoke volumes of her past, present and the promise and peril of their future.

“This might be the start for the future, for our grandchildren,” Todacheenie told her grandchildren at that time. That was the reason why she gave up her land, said Benally.

Meeting with NTUA officials on that occasion, Ella Todacheenie and her children – Mary Benally, John Todacheenie, Bruce Todacheenie, Amos Noelson, and Franklin Todacheenie – signed an agreement to hand over land on which she had herded sheep and goats.

“This was where we gathered cows and horses to brand,” Vanna Benally explained. “And we herded sheep and goats,” said Wilford Benally, the grandson of Ella Todacheenie. A family cornfield is nearby as well, said Vanna Benally, adding that her grandmother was also a stargazer and a well-known individual in the community.

“She knew that this land was just sitting here and she knew it would be better than a power plant emitting pollution,” Wilford Benally explained.

Thanks to Ella Todacheenie and her family, the Navajo Nation has plugged into the sun at the recently developed Kayenta Solar Facility.