‘A Fistful of Dollars’ in Diné Bizaad premieres next week

“A Fistful of Dollars” (Beeso Dah Yiniljaa’) is next in the line of movies dubbed in Dine Bizaad. 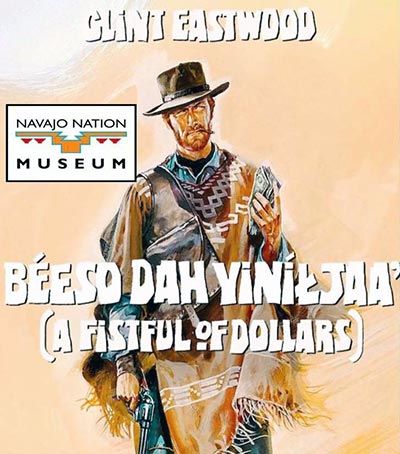 The Navajo-dubbed western has been in the making since 2018. It was originally set to be released in spring 2020. However, due to the pandemic, the movie was delayed and is now set for its premiere and DVD release next week.

Shawn Jim, the voice of Clint Eastwood, said he was not expecting to get the lead role of the movie because he had initially auditioned for a different character who did not have many lines.

“It was long hours because I was the lead voice actor,” Jim said. “I spent I don’t know how many hours at the studio in Gallup.

“It was a fun experience,” he said. “It was nicely set up, everything was there, the equipment, the sound. Every time we go in there, it was serious because we knew we had to get it done.”

Jim did a little bit of improvisation occasionally. Sometimes the wording was not how Jim would say a word so he would substitute a word for how he would say it. They let him get away with it once in a while.

Manuelito Wheeler, director of the Navajo Nation Museum, said he chose “A Fistful of Dollars” to be the next movie dubbed in Navajo because of requests from Diné elders.

“It only makes sense as that is a genre of movies that really captured their attention when they were younger,” Wheeler said. “I mean, my dad watches westerns on TV probably on a daily basis still. So this movie is for them.”

Jim spoke about his own 80-year-old grandmother and how she also watched westerns and still does to this day.

He said that he is not completely sure why elders tend to watch westerns but said, in his own opinion, elders watch westerns because it brings them back to a time they once lived in.

“My grandma grew up during that time when it was all horse-drawn wagons, everything was pulled by horses, done by horses,” Jim said. “I guess it reminds them of a simpler time, that’s why they’re so interested in it. They lived it, they experienced it, and that’s how they were brought up.”

Wheeler talked about the importance of dubbing movies in Dine Bizaad and said currently all Native languages are struggling to survive in the United States.

According to UNESCO’s Atlas of the World’s Languages, as of 2010 there was a total of 200 languages in the United States that are endangered, vulnerable or extinct.

Of this total, 54 are extinct and the remaining 146 are either endangered or vulnerable to endangerment.

“Language is at the core of our Navajo culture so we must do whatever we can to save it,” Wheeler said. “These movies are just part of that effort to become aware and create discussion about it.”

Jim also talked about the importance of dubbing these movies into Diné Bizaad. He said the language makes Dineé people unique and makes us who we are.

“Our ancestors, our old ones, our grandfathers, our grandmothers, they knew if we lost our language then we would lose a part of our identity,” he said, “and if we lose that, we go into chaos.”

Jim said right now, the Diné have to prepare and plan for the future and teach Diné Bizaad to Navajo youth.

“It’s our responsibility to teach our language,” he said. “When our grandparents learned from their grandparents and all the way back, they didn’t rely on the education system. Sure, it was an education but it was their parents who taught them.”

Jim hopes that his contribution to this movie brings out the best in Diné youth and elders because the pandemic has taken a lot from the Navajo people. He hopes the movie brings comfort and laughter so they can continue to move forward.

Wheeler shares Jim’s hopes and thinks everyone, regardless of age, is going to love the movie.

“It’s so fun and so different than the other movies we have done,” he said. “The few I have shown it to really are blown away by what the Navajo Nation Museum has done.”

The official cast and crew premiere will kick off showings across the Navajo Nation. The premiere will be held at the Window Rock Cinema next Tuesday.

The move will be free and open to the public but there will be limited seating and audience members will need to present a COVID-19 vaccination card and an onsite rapid test will be required for entry.

After the initial premiere, the movie will have free screenings at the Black Mesa Twin Cinema in Kayenta on Nov. 18 and at Goen Cinemas in Tuba City on Nov. 19.

There will also be a screening in Crowpoint or Shiprock, however, the location and date are yet to be determined.

The free screenings will continue throughout next week in Window Rock, Kayenta, and Tuba City.

DVDs will be sold at all screenings and will be available at the Navajo Nation Museum.

Here is a sample of the translated video: