‘Be who you want to be’: Diné make-up artist personifies ‘Native Girl Beauty’

Through her “Native Girl Beauty” social media platforms, 23-year-old Diné Alselena John is a role model not only for make-up, hair and beauty, but for making dreams come true.

“People are interested in what I have to say,” said John. “My stories are funny and my experiences are amazing. They’re really engaged with what I do.” 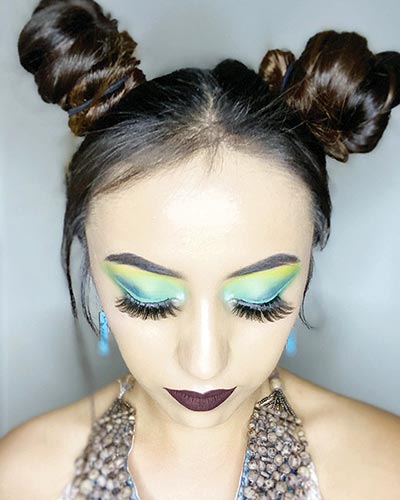 These photos illustrate the many looks and styles Alselena John creates with her make-up artistry.

John, who grew up in Fort Defiance with six siblings and was a high achiever in high school, said she always dreamed of becoming a make-up artist.

She is also a natural-born marketing wiz.

John says she put a lot of work and thought into developing her beauty brand five years ago, which incorporates elements of her culture, including Native designs and colors.

“Native Girl Beauty is a brand that I came up with,” she said.

“I have my own logo that has a little bit of everything of me in there,” she said. “It has flowers that represent my girls. It has the medical sign because I’m in the medical field. You even see the four mountains.”

She said she wanted to create her brand to be unique, but also relatable and memorable.

“Now, it’s amazing because now when I’m at song and dance or the rodeo or fashion show, wherever, people say, “Oh, you’re Native Girl Beauty!” she said.

Many of her online followers for her make-up and fashion videos are from Navajo communities, John said, which she greatly appreciates, and she enjoys the two-way communication that going live on social media offers.

“That’s the number one time when people really get to know who I am, my personality,” she said. “I love talking to people one-on-one. I get to know who they are and it keeps the circle going.”

John said she was first inspired to learn about using make-up when she entered high school and saw some older students embracing their beauty while at the same time other students had self-esteem issues.

“What really encouraged me and motivated me was the realization that you need to be who you want to be because no one else is going to be you for you,” she said.

From there, she started experimenting and developing her own style.

“It was just a part of who I was, my imagination and my creativity,” she said. “I just kept going with it, no matter how many times I was told you shouldn’t wear that or shouldn’t be putting that on.”

John says no matter what people might say about you they can’t touch you because you’re your own unique person.

“With make-up and aesthetics, you can do what you want to do and no one else can give you an opinion about it because it’s who you are and what makes you happy – it’s a way of expressing yourself,” she said.

She also learned from other make-up artists on social media, such as Carli Bybel.

“A time went on, I just kept learning and eventually, when I had the basics down like foundation, I was kind of just going my own way,” she said. “I started using different techniques, different brushes. It just kept growing.” 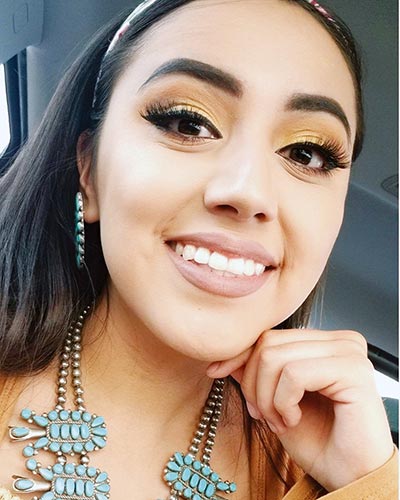 After high school graduation in 2017, working and pursuing her education became most important so she could support her dreams and continue to develop her “Native Girl Beauty” platform.

While working as a dental assistant, she earned a degree in dental hygiene from the accelerated Pima Medical Institute program in Albuquerque during the COVID-19 pandemic.

The strict and rigorous degree program was extremely challenging, she said, but she made it and even gave birth to a baby girl during that period.

“The school is very strict,” she said. “I was very grateful I was able to finish the accomplishment that I really wanted. Everything that I do I put a lot of hard work into.”

“I want to be able to provide for my girls and I want them to learn from me that hard work is what is needed to make a living in this lifetime,” she said. “I want to make sure they have the right role-model to live up to.”

With her education completed and her career as a medical professional launched, John said the sky’s the limit in terms of expanding her “Native Girl Beauty” brand and her role as a social media influencer.

“My biggest goal was to be able to fund my page and now I feel like I’m able to do that,” said John. “I do constant giveaways.”

In addition to doing live, interactive make-up and hair demonstrations, John conducts raffle contests for free gifts like make-up and jewelry and sells “Native Girl Beauty” merchandise, including stickers and T-shirts, using the proceeds to reinvest in her platform.

She also organizes events like toy-drives around the holidays and offers gift incentives for people to contribute.

“I like to give back to the community,” she said. “I hope to grow and expand Native Girl Beauty platform and become bigger and better.”

While John is a self-taught make-up artist, she plans on taking cosmetology courses to broaden her skills, including specialty services like lash extensions to diversify her business offerings.

“I’m excited,” she said. “I’m always open to new opportunities. I always leave everything in God’s hands and move forward day by day.”

‘Proud to be Native’

John credits her grandmother Martha Willie for her positive attitude.

“She was always an inspiration to me,” said John. “She always saw the positive in everything. Anything can be taken away in a snap of a finger in this day and age so you just really have to live your life and have fun with it.”

She said strong parental support from her mother, Doris John, a traditional clothing maker, and her father, Alfred John Sr., also played a strong role in who she is today.

“I realize the more hard work you put in, the greater success you have,” said John. “You can’t expect everything to get done for you because that’s not how it works. You have to go out there and get it done on your own.”

John is also not afraid to be a role-model for preserving her Diné culture and traditions.

“I love everything about it,” she said. “It’s mostly about being proud to be Native American. Nowadays, I know there’s a lot of push with people trying to make people be someone they’re not.”

For example, she enjoys doing things like participating in song and dance and dressing up in traditional attire.

“I’m always wearing jewelry,” said John. “There’s probably never a day that you would not see me wearing jewelry because we, as Navajos, have been taught that your jewelry is your protection.

“You wear that everywhere you go to keep yourself safe,” she said.

She finds incorporating beauty and make-up into her traditions makes it even more fun and inspires other young people to participate.

“It doesn’t have to be boring,” she said. “When you wear that beautiful red lipstick when you’re dressed with your traditional jewelry, it’s, like, “Wow, that’s really beautiful!’”

John said when she was younger she was made fun of, even by some of her own friends, when she dressed in traditional clothing and wore moccasins.

“They would say, what is that on your feet?” she said. “Now, as I get older, I see it completely different. It’s like if you go out there and embrace it, more people want to be doing it.”

With her brand firmly established, John’s next dream is to open her own “Native Girl Beauty” store, which will offer beauty services, products and clothing for Native American teenagers and women.

“It will be a nice boutique where Native American women can go in and feel like themselves,” she said, “have things that relate to us, whether their names, colors and traditions that reflect their style and where they come from.”

John believes you’ll never know if you’ll be successful until you try.

In encouraging other young Native Americans to pursue their dreams, John says, “Always go for it!”

“Don’t worry about other people’s opinions because at the end day, they’re not the ones in your shoes, you are,” she said.