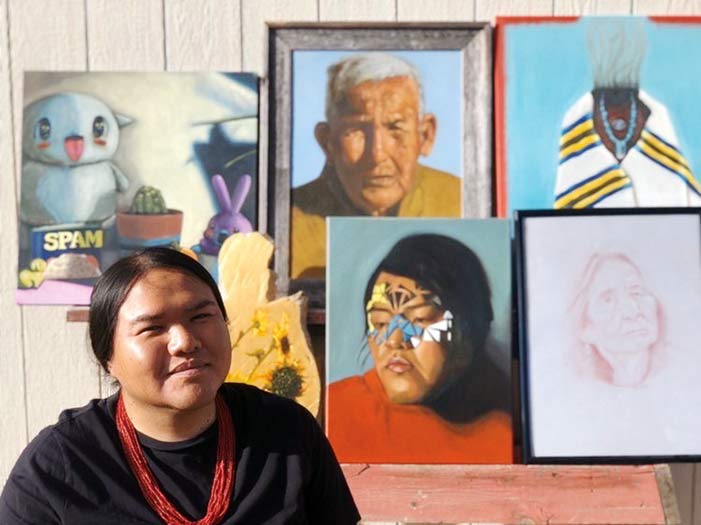 Courtesy photo
Pete Sands has been making music since he was 19. His interest in music sparked while listening to records at his grandmother’s home in Kinlichee, Ariz.

Clint Holtsoi’s artwork plays in the in-between of many poles – bright and gloomy, realism and surrealism, light and heavy themes.

Holtsoi uses gender-neutral pronouns – they, their and them – and identifies as nadleeh and queer.

Holtsoi’s work is often rooted in their identity as being a queer Navajo person. For most folks, family is an important aspect to being Navajo and this is no different for Holtsoi.

“Family always influences me, especially my paternal grandma. Her name is Mary Holtsoi,” they said.

One piece they created was a portrait of their father wearing a crown made of melted “cowboys and Indians children toys.” They created this to show the exploitation of Native American imagery and identity.

“I try to have some emotion behind what I’m creating,” they said. “It’s also influenced by Indigenous people and how we survive.”

It’s this resiliency that Holtsoi likes to honor and capture in their work.

“We survived so much,” Holtsoi said. “Creativity comes from life-giving.”

The portrait of Holtsoi’s father was created in their signature style that stands out among contemporary Native art. 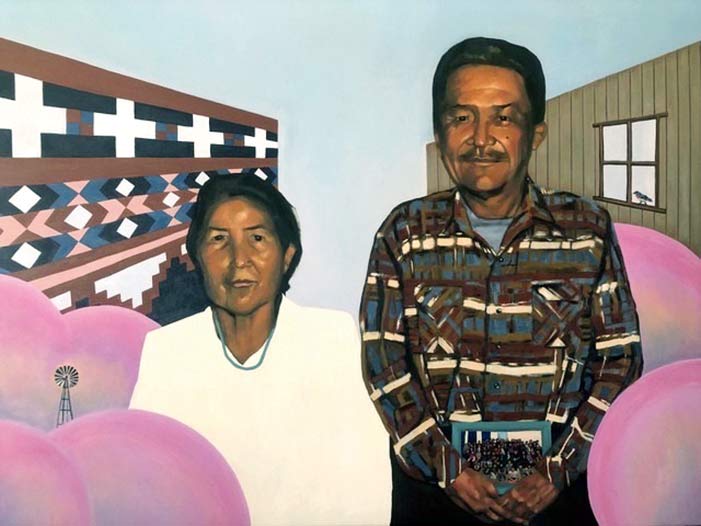 Courtesy photo
This painting is reminiscent of the famous “American Gothic” painting by Grant Wood. However, this has Holtsoi’s signature surrealism mixed with realism style. Holtsoi brings a refreshing perspective to contemporary Native art.

“For me, artwork is survival and art is a way of looking at life,” they said. “I bring a different perspective of that to art in general.”

Holtsoi uses very bright colors mixed with stark shadows. There is humor and light in their pieces but Holtsoi has a talent for also maintaining a sense of somber. The somber is rooted in the message.

For example, their series “A Note to Our Diné People, Don’t Melt Away” encourages the community to hold onto the Navajo language and culture.

“It’s these images of Diné people as ice cream or as popsicles,” they said.

They were inspired by the videos they saw across social media of children singing songs in Navajo.

“It was really influenced by our youth,” they said. “It was an encouragement to them to keep our culture alive and keep the language alive and don’t melt away.”

While the message is a dire warning, the series is visually cute and happy, with a Manga vibe. Manga is the Japanese style of comics and graphic novels.

Holtsoi has been influenced by Studio Ghibli, a Japanese animation film studio.

As in the animated films, Holtsoi creates their own otherworldly characters and sets them in contemporary scenes. While this is one of the defining characteristics of their work, it isn’t the only style they incorporate. A lot of their portrait work is embedded in realism.

Holtsoi had their work displayed in the Art123 Gallery and the Loom Indigenous Art Gallery in Gallup.