Bloomfield headed to state after fourth-quarter defeat of Grants 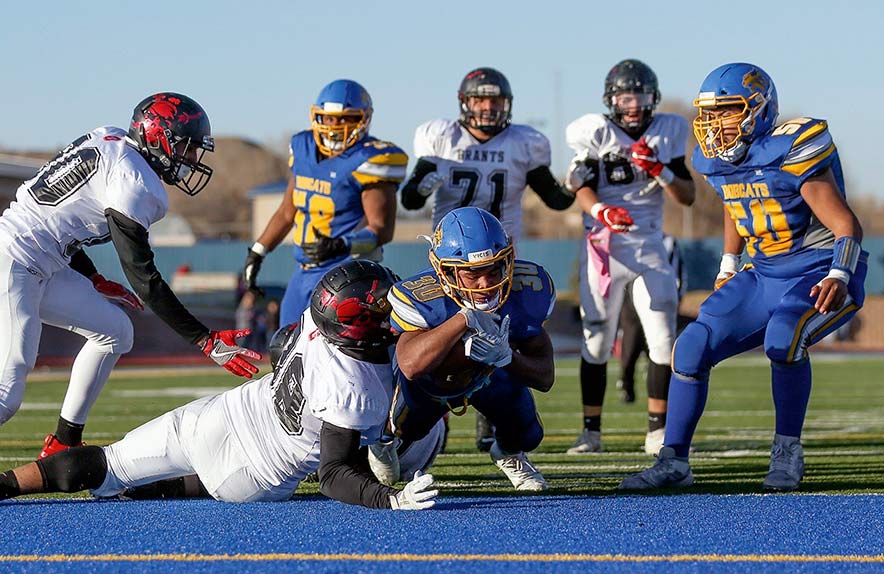 Special to the Times | Curtis Ray Benally
Bloomfield running back Kenyon Mosley (30) dives into the end zone for a score against Grants' Toa Sanchez (38) and Tyler Everhart (80) in fourth quarter of Saturday's New Mexico Class 4A state semifinals at the Bobcat Stadium.

The Bloomfield Bobcats are headed to the 3A state championship game, but needed a fourth-quarter rally to pick up their latest win and remain undefeated.

Bloomfield improved to 12-0 Saturday with a touchdown in the closing minute of the game to complete the comeback and knock off the Grants Pirates, 48-41 in the semifinals of the 4A State football tournament in Bloomfield.

Grants, the No. 4 seed, gave the Bobcats, the No. 1 seed, all they could handle, but Kenyon Mosley scored the go-ahead touchdown on a 6-yard run to put the Bobcats on top for good.

Bloomfield had to battle from behind in the fourth quarter as Grants held a lead early in the period.

“We showed a lot of resiliency and a lot of fight,” Bloomfield head coach Bob Allcorn said. “Our hurry up offense sealed the game for us late.”

With Grants on top by right, JT Seitzinger scored on a 6-yard run and Vincent Marquez carried in the two-point conversion in the fourth to tie the game at 41.

Bloomfield led 19-14 after one period, and pushed the lead to 26-14 following a 13-yard touchdown from Marques to Noah Gurule. That was the only score of the second quarter, as Bloomfield took that eight-point lead into the locker room at the half.

After the Pirates cut the lead to 26-21 in the third, Seitzinger scored on a 2-yard run to keep Bloomfield on top, 33-21. That score was set up by the Bloomfield defense, which recovered Grant’s fumble.

The Pirates could not complete the two-point conversion however, and their lead was just one point 34-33.

“We made some crucial mistakes on defense, and that allowed Grants to stay in the game,” Allcorn said. “This was not a defensive performance up to our standards.”

Following up Bloomfield punt, Brandon Furbee completed a 27-yard touchdown to push Grants to a 41-33 lead.

But the Bobcats went on to score the last 15-point of the game to get the win and advance to the state championship.

Bloomfield will face Portales Saturday at 1 p.m. in the state championship game, which will be held at Bloomfield High School.

Portales defeated Lovington in their semifinal game, 26-7 on Saturday afternoon. The Rams head to the state championship with an 11-1 record.

This will be the second straight year for Bloomfield in the state championship, and Allcorn said he thinks his team looks ready.

“We are looking very good,” he said. “I have a very talented group. They have the right resolve and are going against a very good team in Portales.”

Allcorn set the Bobcats are going to have to slow down Portales’ running back, who he said is probably one of the best, if not the best in the state.