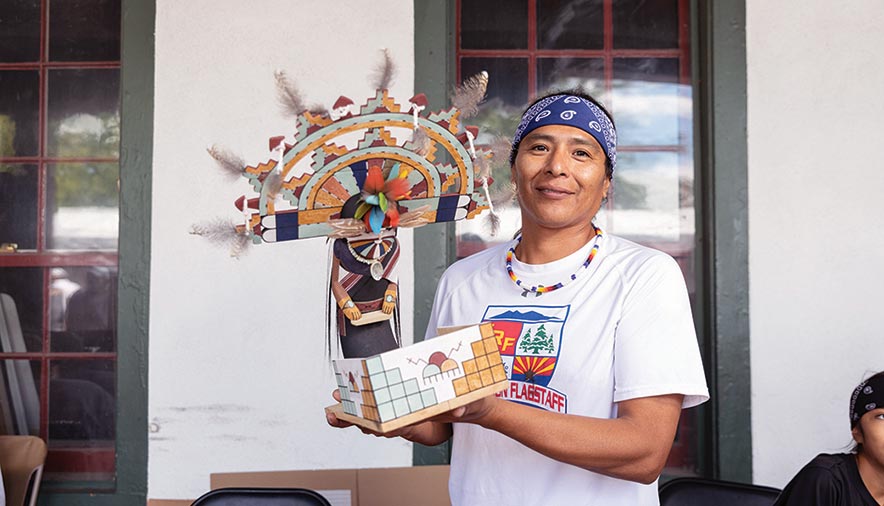 Under new leadership and in the face of the COVID-19 pandemic, the Southwestern Association of Indian Arts expanded its digital platform and will offer a hybrid in-person and virtual Indian Market Aug. 21 to 22.

While the smaller outdoor Indian Market will be a little different this year due to uncertainties related to COVID-19 and restrictions on large gatherings, the organization’s focus is on the health and safety of artists, collectors and patrons as its first priority, said Board Chairman Tom Teegarden.

“The guidance that we’re getting between what the state edicts are, what the CDC is saying and what happens with vaccination rates – all of these things are imposing different marching orders for things going forward,” said Teegarden. “You’re using your best guess in trying to plan and make commitments. It’s like, how good is your crystal ball?”

Nevertheless, Teegarden is optimistic that with pent up demand and purchasing power, this year’s event will be a success – provided there is no resurgence of the virus.

“After last year’s pivot and presentation of a virtual Indian Market, we are excited to welcome visitors and artists back to our beloved, 99-year-old event,” said SWAIA Executive Director Kim Peone in a press announcement on April 15.

The number of Indian Market artist booths has been pared down by about half to 500, although some artists are sharing booths, bringing the total number of artists participating in the in-person market to about 600 out of the 1,117 who were juried into the 2020 market.

Booth assignments were made based on the scores artists earned in the judging for the 2020 market, with high scores earning first dibs on booths.

The remaining 500 or so artists who were juried in but didn’t make the cut for a booth were wait-listed and have the option of participating in the “NDN World” Virtual Indian Market.

However, some of those artists have already sought out other venues to showcase their work, including Santa Fe galleries and hotels, or the Free Indian Market, launched in 2018 at the Scottish Rite Temple, that does not charge artists booth fees.

Peone said she understands that it is an emotional time for everyone and she supports the prerogative of every artist to make the choices that are best for them.

“People have lost their livelihood over the past year,” she said. “Our mission is to support artists. This is just a really difficult time for all of us. We’re coming out of a pandemic and we’re doing the best we can.”

Some artists expressed dismay at the booth priority being based on judges’ scoring and suggested booths should have been allocated by random lottery instead.

“The SWAIA artists who juried in last year are high-quality, cutting edge Native artists and, no matter how you slice it, if you are going to showcase less than that full amount you’re going to leave some exemplary artists out,” said Teegarden. “We’re getting a reaction from that now which is completely understandable.”

However, Teegarden also defends relying on a merit-based scoring system to assign booths and contends that a lottery approach would probably have left out an even larger number of legendary artists.

“The only really fair way of doing that was going back to the judging and scoring and that’s tough for people, because judging is subjective,” he said. “There’s all kinds of variables at play.”

SWAIA utilizes a “blind” jurying process where judges’ identities or qualifications are not revealed.

Peone says the 2020 market judges were chosen before she was hired in April of 2020, but SWAIA followed “policies and procedures” with regards to the selection of judges for the 10 Native arts classifications.

In response to criticism that Indian Market has squeezed out more traditional artists, including through the discontinuation of tenure in 2016, Teegarden acknowledged that much of the expansion and growth of the market has represented emerging artforms at the forefront of what is “new and innovative” in Indian Country.

“A lot of it is a response to what the public wants, what the buyers, patrons, and collectors want,” he said.

However, Teegarden assured that this trend does not represent a “scaling back” of traditional artforms that have always been the “heart and soul” of the market.

Regardless, he said the organization is doing everything it can to own the current circumstances and the difficult decisions they’ve had to make in an unprecedented year.

“If people were admitted to market a year ago we’re doing everything we can to make them part of market this year,” he said.

The daughter of two Institute of American Indian Arts graduates, Peone, Colville Confederated Tribes/Eastern Band of Cherokee, is a finance/accounting/marketing and information technology professional who has held multiple high-level executive positions with tribal governments and enterprises over her 35 years serving in Indian Country.

The first ever Native American woman to lead SWAIA, Peone, who was born in Santa Fe, says she is working closely with the board to create a sustainable business model.

She is responsible for forging a partnership with the online Artspan art marketplace (Artspan.com) that hosted the first Virtual Indian Market last August, with 458 participating SWAIA artists who, with technical assistance, built their own websites and captured over $500,000 in online sales.

“That was something very positive for the organization because it was a journey that they took with us,” said Peone. “We’re trying to meet the artist in their space.”

Prior to the virtual initiative, only 77 of the 1,117 surveyed 2020 Indian Market artists had their own websites, she added.

“We had many do extraordinarily well and almost everyone told us they did better than they thought they would,” he said. “By pivoting, we were able to introduce hundreds of Native artists to e-commerce.”

In tandem with the virtual market, Peone spearheaded the development of a digital marketplace called “Indigenous Collections” to showcase SWAIA artists yearlong instead of just two days a year at the in-person market in August.

“We’re in this place of really having to be innovative and creative,” she said. “When I look at the mission statement to bring Native Arts to the world by inspiring artistic excellence, fostering education and creating meaningful partnerships, I’ve never veered away from that.”

Peone believes the only way you can really bring Native arts to the world is through the internet. She also led the overhaul of the SWAIA website, which had not been substantially updated for more than 20 years.

“We’re definitely in the midst of creating something new and using technology to help artists,” said Peone. “We want to use this as an opportunity to highlight artists and help them with their sales.”

While the expansion to digital art display and online sales is an idea whose time had come for the organization, ironically it was the crisis of the pandemic that forced the transition to the digital world in adherence with SWAIA’s mission.

“It’s bumpy for sure and has its challenges, and it’s a heavy lift,” said Peone. “What was lemons, we’ve turned into lemonade.”

Due to the ever-changing COVID-19 guidelines, Peone says the schedule of popular special events for the market is still evolving and subject to change.

“When you look at the public health order and the limitations from a planning perspective, it is very difficult for us to be very firm in what the end result is going to be,” she said.

However, the annual best of show ceremony, gala/auction and haute couture fashion show will definitely take place at the Santa Fe Convention Center, albeit with modifications.

Currently, the convention center has a 33% capacity limit for events and does not allow tabled meal service, said Peone.

“The reality is we have constraints in reference to getting back to normal,” she said. “The new normal is a moving target. It makes it very difficult because we’re 10 weeks away from our from Indian Market and we’re still working on logistics.”

In another change, the 2021 market, which has always been free for attendees, will be ticketed at $20 for Saturday, $15 for Sunday, and $10 for students and tribal members.

An earlier idea for a two-hour limit for attendees in order to moderate capacity and accommodate social distancing has been discarded, said Peone.

With pandemic-related city ordinances that permitted restaurants to expand outdoor service into the streets surrounding the Santa Fe Plaza, and other factors, the Indian Market footprint downtown has shrunk significantly as well, said Peone, which also impacted the number of available booths.

Into the future, Teegarden said that SWAIA is looking for opportunities to work collectively with other Native Arts venues, the city of Santa Fe, and merchants to try to have more of a coordinated effort that can leverage the full potential of Santa Fe Indian Market as a whole.

“I see us building critical mass of people that take a more expansive view that I think is going to be healthier for the organization long-range,” he said.

Next week, hear from Indian Market artists. Contact rkrisst@navajotimes.com to be included.