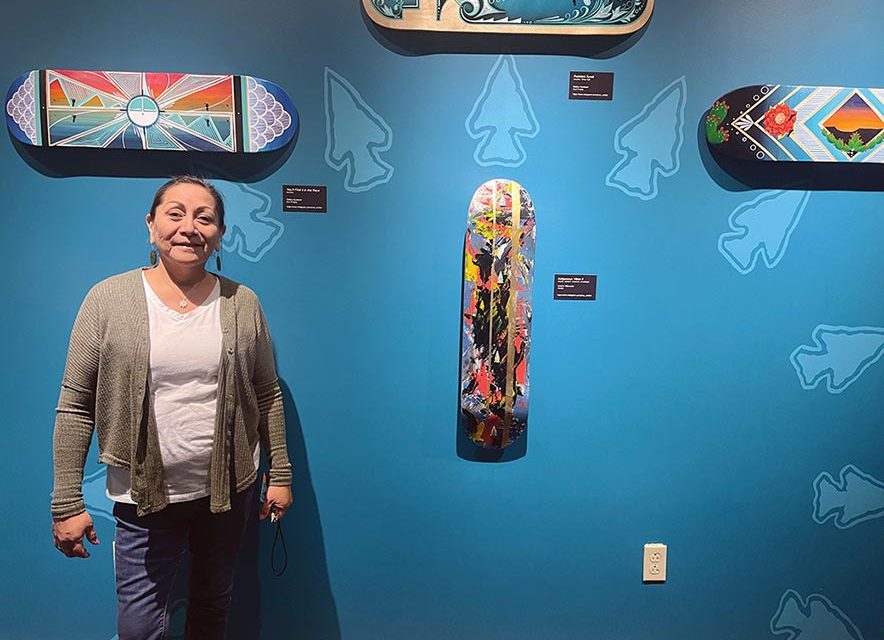 Special to the Times | Chael Moore
Paula Mirabal, head museum curator, invites PIVOT to be one of the 2022 rotating exhibits at the Indian Pueblo Cultural Center.

By Chael Moore
Special to the Times

With 30 years of museum experience, Paula Mirabal from Taos Pueblo has been dedicated to giving Native youth and artists a space to express themselves.

An alumnus of the Institute of American Indian Arts in Santa Fe, New Mexico, Mirabal received two museum studies degrees and a certificate in arts and culture advocacy from the University of Denver in Colorado. Before arriving at the IPCC, Mirabal worked at multiple museums in the Santa Fe area and has experience organizing Native-led events.

Mirabal said she became interested in museum studies after Charles Daly, a non-Native professor from IAIA, inspired her to become a support mechanism for artists who needed a platform.

“This was in the late eighties, before the Native American Graves Protection and Repatriation Act of 1990 was passed, and there were few Native museums that existed,” she continued.

Mirabal and her museum colleagues share a collective goal of creating a proper environment to maintain their art and traditional culture. 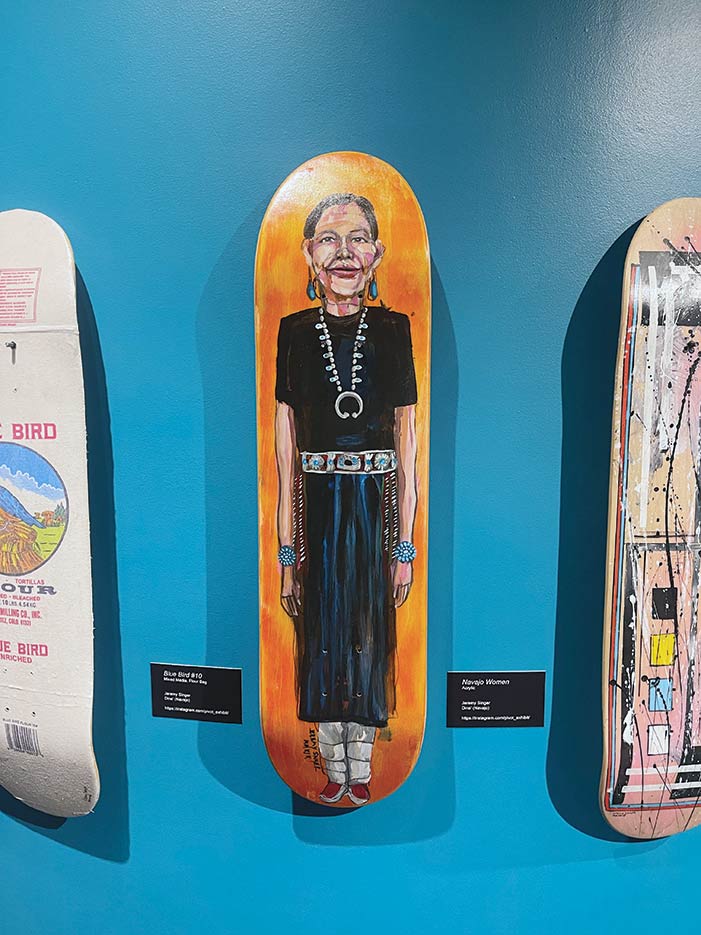 The IPCC currently has three rotating exhibits, with each show changing annually or quarterly. Each exhibition strives to rewrite narratives and introduce visitors to new, emerging art and education on social issues affecting local Native tribes.

The Native American Student Art Show, established in 1979, showcases every fall, receiving approximately 150 student submissions each year. The show is an opportunity for Native youth across New Mexico to submit artwork based on a themed prompt created by Mirabal and her colleagues.

With applications being available in August, opening day occurred earlier this year in October, and the show will last until Jan. 8, 2023. The show is open to students enrolled in a federally recognized tribe and attend a local public, charter, or private school.

The show offers students a space to share their take on social issues, artistic expression, creativity, and more. Students can sell their work, with 100% of the profits returning to the student.

Mirabal shared that one of her favorite parts of the show is seeing the students open up, which was especially crucial during the height of COVID-19.

“I used the student art show to ask them what helped get them through and to show me through their drawings,” Mirabal said.

“They’ll be here after I’m gone. They’re the ones who are going to take the mantel to talk about our stories, and they need the outlet,” Mirabal said after being asked why it’s crucial that Native youth need an opportunity for creative expression.

PIVOT is the second rotating exhibit on display, co-created by Landis Bahe, Diné, and Kandis Quam, Zuni Pueblo/Diné, showcasing Native artists from across the country using skateboards and acrylic paint as their medium. PIVOT depicts the seamlessness Native people have when shifting between their traditional and everyday lives.

Mirabal invited the co-founders to IPCC after viewing their pop-up exhibit at the Museum of Northern Arizona in Flagstaff a couple of years ago. The IPCC is PIVOT’s fifth stop and showcases over 135 decks from artists of different tribal backgrounds.

Each deck features a Native artist and depicts art inspired by their culture, songs, creation stories, and more.

“For the youth to become familiar with the symbolism and to see it on the deck makes them go, wow, I can do that too; I can do anything,” Mirabal said.

PIVOT’s opening day occurred in February earlier this year and will be on display until Feb. 19, 2023.

The third exhibit in the rotation is IPCC’s Art Through Struggle gallery. The gallery is annually showcased and highlights community issues ranging from environmentalism to substance abuse in local tribal communities.

Taos Pueblo/Diné artist DeAnna Autumn Leaf Suazo’s work is currently on display and depicts her artistic style while sparking a conversation about domestic violence, given her recent passing. Mirabal collaborated with the Coalition to Stop Violence Against Native Women and used the gallery to share DeAnna’s story and raise awareness regarding domestic violence.

Mirabal strives to revitalize the word “museum” and centers her exhibits around what will encourage the community to visit. Inviting artists who incorporate contemporary style while taking inspiration from their tribe’s culture and traditions are how Mirabal executes this.

With PIVOT, utilizing skateboards as a canvas helped create a medium to which youth could be familiar and easily connect. IPCC works with local artisans, businesses, and the education department to provide programs and workshops to Native youth in the state of New Mexico throughout the year.

The PIVOT exhibit allowed Mirabal to partner up with artists from the show and Maize Skateboards, a local deck company from Laguna Acoma, which provided decks to participants and assisted with the youth workshops.

“I really like the representation of all of the tribal communities across the nation in this exhibit. It’s not just us, but everyone, so that when our visitors walk through, they see something from Paiute, Blackfeet, Ojibwe, and more,” Mirabal said.

PIVOT is one example of the ways Mirabal is attempting to tell her own tribe’s story, but also other tribal communities as well. As a museum curator, she gives a glimpse of the possibilities within a museum.

Mirabal shared that she has been fortunate to witness the museum field evolve for Native peoples during her time as a curator, and witnessing youth use art to speak has been powerful for her to see.

The Native American Student Art Show celebrated their 42nd annual show in October and is a tradition offering youth a platform.

“If not with their voice, then with their art, and that’s important because they are the next generation. Even if they don’t become artists, they still have this memory of speaking,” Mirabal shared.

Mirabal is part of a three-person team and supervises the Curator of Collections, Amy Johnson, and the Archivist Librarian, Jonna Paden, at the IPCC. Together, the three make up the museum staff. Mirabal shared that one of their goals is to make their library archives more accessible to their 19 Pueblo communities.

“We’re hoping to have a new building for it, to take better care of our archives because we are the stewards of our history and our future,” Mirabal said.

When Mirabal thinks about what exhibitions to curate next, she thinks about the next generation. This is the driving force behind including the contemporary and the traditional in her exhibitions, such as PIVOT and the Native American Student Art Show, on display now.

Looking to the future

For the remaining days of November, the IPCC is closing out Native American Heritage Month. It offered seasonal dances every weekend, rotating exhibits, lecture series, daily vendors, and more.

Welcoming the December month, IPCC will be hosting a “Pueblo Shop & Stroll” this weekend on Dec. 2. It will include a 45-vendor market just in time for the upcoming Christmas holiday.

In the future, Mirabal has plans to exhibit art that centers discussions on social issues. Her next exhibit will highlight environmental problems using the “Art through Struggle” gallery. The artists will be on-site for a live painting and discussing land and water.

With some exhibits changing annually, Mirabal can brainstorm what to showcase to her community next, keeping her busy and on her toes. Mirabal’s priority for youth and community participation and outreach allows her to decide which direction to go in next.