Election board certifies all but three delegate seats

The Navajo Board of Election Supervisors certified the Nov. 8 general election results two days before Thanksgiving.

It didn’t take long for the election board to certify the votes after discussing a letter from the Jonathan Nez-Chad Abeyta campaign in a closed meeting that asked the board if they could consider their release of information request.

According to a response letter from the Navajo Election Administration, signed by Rosita Kelly, the election administration’s executive director, the Nez-Abeyta letter was denied because it was “received after normal busy hours.”

While Nez and Abeyta could inspect public records, according to the Navajo Nation Privacy Act, the board of election supervisors wrote in its Nov. 23 response that they had to pay 10 cents for every page copied. However, “all information deemed confidential, including names of voters, their votes, their phone numbers, and residential addresses, are confidential and will not be disclosed or released,” the response letter read.

The election board wrote the pair requested the board “initiate” a recount. The board rejected their request, stating they found no “substantial irregularities in the voting or the counting of the ballots.” In addition, they wrote Nez and Abeyta did not pay the required $50 per poll site fee necessary to for a recount to occur.

Former Navajo Nation presidential candidate Emily Ellison paid $5,500 to have all 110 chapters do a recount of the primary voting results. The recount was held at Window Rock’s Department of Diné Education building.

Because they did not pay for a recount within 10 days after Nov. 8, the board wrote, “it would be unlawful for NEA (Navajo Election Administration) to conduct a recount.”

Raymond Maxx, vice chair for the election board, said the board had to go into an executive session to talk about the request made by Nez and Abeyta. The board came out of their closed meeting and certified the Nov. 8 election results.

“We moved forward; we certified all the elected positions,” Maxx said on Nov. 22.

Maxx said the only results they did not certify were the grievances filed with the Office of Hearings and Appeals. Those votes, assuming the cases are adjudicated or dismissed, will be certified at the next regular election board meeting. If they are dismissed or have been decided, Maxx said those results would be certified Dec. 8. In the meantime, the three race results remain unofficial.

“We just kind of leave it up to the process over there – the legal and technical. Once it’s cleared, then we come back and certify them,” he said.

The three grievances filed by Mathew Tso, Edison Wauneka, and Leonard Tsosie have all been dismissed, according to the Office of Hearings and Appeals. While OHA has dismissed all three cases, their cases go back to the election administration, where they’ll review them. If they are dismissed there or if a recount was granted and is completed, the results could be certified during the board of election supervisor meeting Dec. 8. 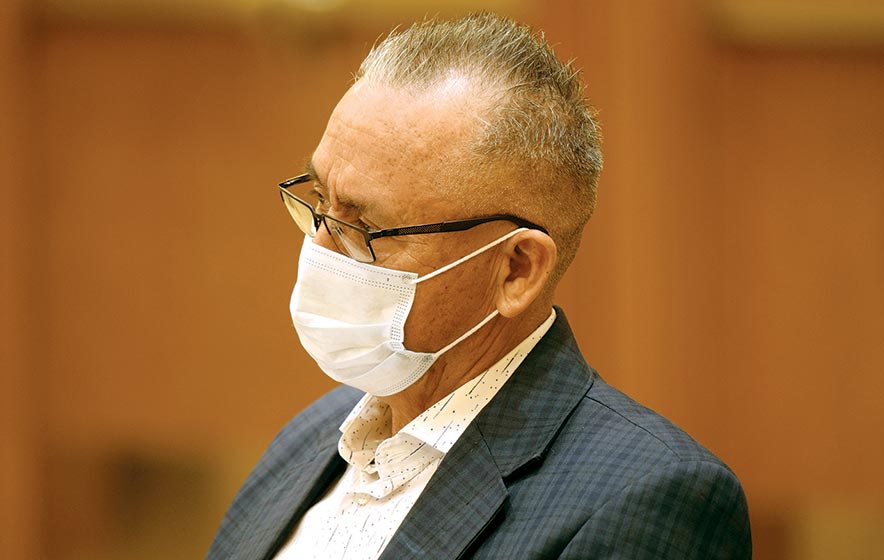 Navajo Times | Donovan Quintero
Rickie Nez, who was re-elected, attends the 25th Navajo Nation Council orientation on Monday at the Twin Arrows Casino in Flagstaff. Nez’s Nov. 8 general election results, in which he unofficially defeated challenger Mathew Tso, won’t be certified until the Navajo Board of Election Supervisors discussion was dismissed by the Office of Hearings and Appeals.

On Monday, Rickie Nez was in attendance during an orientation for the returning incumbents and newly elected delegates who’ll be making up the 25th Navajo Nation Council. The orientation was held at the Twin Arrows Casino in Flagstaff.

Navajo Nation president-elect Buu Nygren also attended the Council delegate orientation on Monday. He said he wanted to be there in person to show his support for their appointments.

“I told them that, ‘I’m here. I campaigned on working with Council very closely.’ And I just wanted to be here with the new incoming delegates that are being orientated,” Nygren said on Monday at Twin Arrows. “I want to support them, that all are causes are the same, whether you’re from Eastern Navajo, or Western Navajo, Northern Navajo, Central Navajo – that the issues are the same.”

The vote count did not change for Shawna Ann Claw or Leland Leonard. Claw defeated Leonard, 1,060 to 838, for the seat representing Chinle.

Chinle Agency, having the least number of registered voters at 17,276 electors had the highest turnout out of all the agencies. The election administration reported 9,418 people voted. Western Agency, which has 21,481 registered voters, had the lowest – 51.55%, or 11,073 registered voters who traveled to their respective chapters and voted for their candidates.

Shawna Ann Claw did not gain any votes

Dr. Leland Leonard did not gain any votes

As of Nov. 22, in the Council delegate race, three seats have not yet been certified and remain unofficial. They are: