It was a treat to attend the Arizona Native Edible Experience Nov. 19. 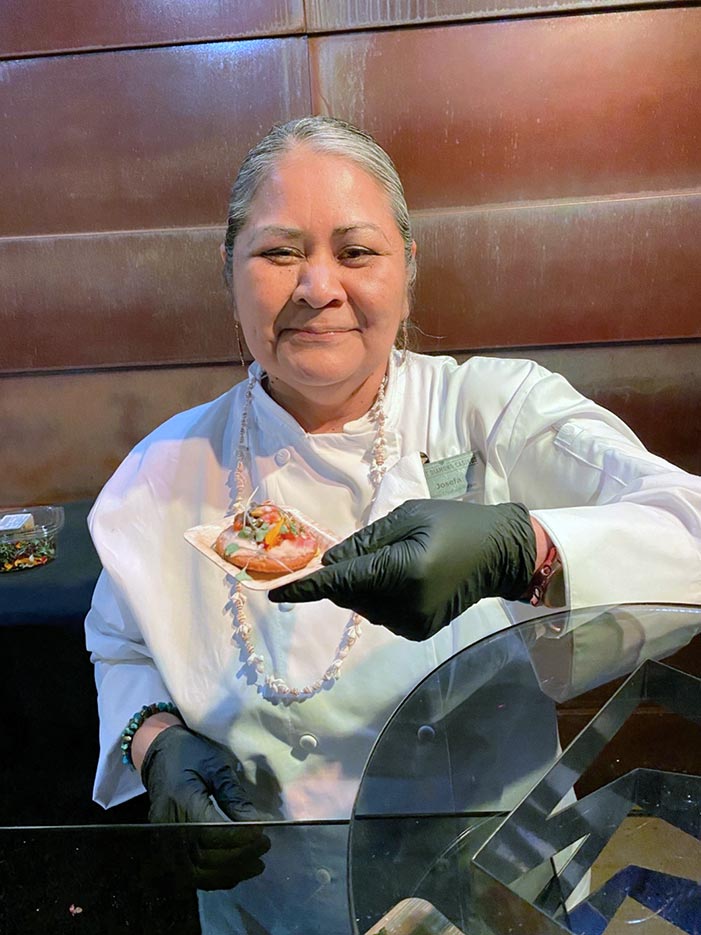 The event began in February 2019, and the Arizona American Indian Tourism Association coordinated it with Scottsdale Western Week to highlight Native cuisine and chefs.

This year, the ANEE took place at Western Spirit Scottsdale’s Museum of the West for the first time in November to celebrate Native American Heritage Month. The ANEE has grown in popularity since its inception during the Arizona Indian Festival.

The event was at the Saguaro Hotel near the Scottsdale Civic Plaza. Now, it is well attended and growing every year.

It took the ANEE committee – including nine AAITA board members and 15 volunteers – to plan the event.

The chefs are selected through an application process, and they must be tribal members and have vast experience in the culinary industry.

“We have developed strong ties in Native communities over the years, and each year before seeking chefs, we plan and curate a program that is diverse and representational of northern, southern, and central Arizona Native communities,” explained Jeffrey Lazos Ferns, the event coordinator.

“Arizona Native Edible Experience was an awesome display of Native foods shared and presented to those who attended the event,” AAITA president Rory Majenty said. “Native people have always farmed and cooked for centuries, sharing their knowledge with all walks of life.”

Arizona is the home of 22 Native American tribes, and each has been a steward of the land long before settlers arrived. Today, many tribal members still rely on their cornfields and ranching to sustain their livelihood for their families.

November marks Native American Heritage month across the United States. Still, in the eyes of tribal members, it is every day to be stewards of Mother Earth and share food and cultural stories.

Many tribal members would trade food, crafts, animals, and textiles with other tribal members across the Colorado Plateau. During the fall season, it is harvest time, and getting prepared for the winter months by storing food and gathering warm materials to keep warm. The ceremonies change with the seasons. Storytelling now begins in some communities, while some may get quieter because winter is coming.

The atmosphere of the Arizona Native Edible Experience was celebratory, organic, and rejuvenating. Eating a variety of foods made by nine different chefs using their local ingredients and Native plants was fulfilling. It reassured visitors that the heritage of tribal members of the southwest is strong and present.

In February 2023, the Arizona Indian Festival will continue along with Scottsdale Western Week. The AZ Native Edible Experience will be in November 2023 because both events are growing as standalone events.