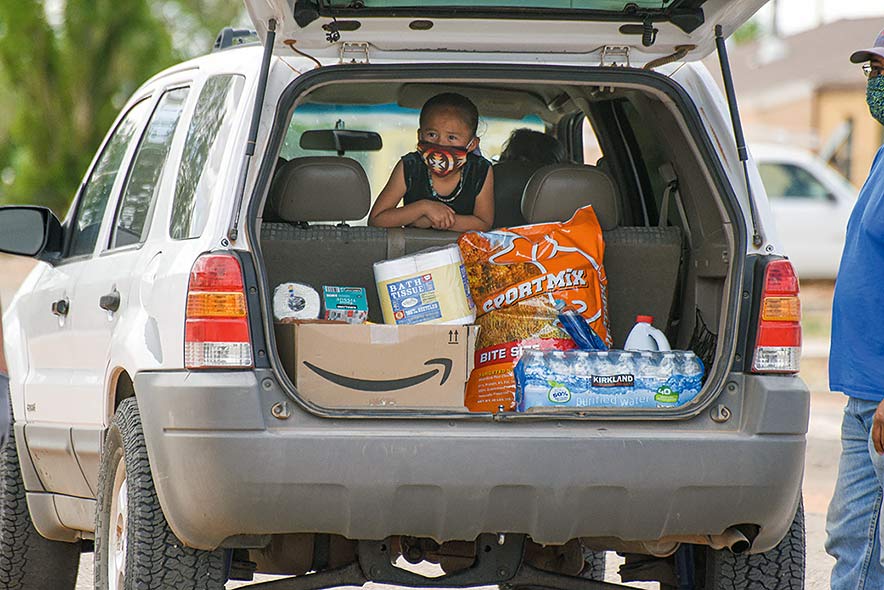 Special to the Times | Krista Allen
A child watches as her family's car is loaded with goods in Cow Springs, Arizona.

The boxes contained food such as flour, rice, potatoes, canned goods and other non-perishable food items; at least one case of bottled water; a package of 10 masks; and cleaning supplies and sanitary items. And dog and cat food upon request.

“Some vehicles were two to three families who live in the same area,” Randall said in an interview on May 28, the morning after a community food distribution was held at his house in Béégashii Bito’, a tiny – and often forgotten – community sandwiched between Tonalea-Red Lake and Shonto junction.

When residents want natural and organic foods, including fresh produce, they have to travel at least an hour to a grocer. Some residents say they also have limited access to news and they don’t hear about free food distributions until after they happen. “(For instance), we heard there was a food distribution in Tonalea-Red Lake (on May 27). We didn’t know about it,” Randall said. “Some families and our neighbors didn’t know about it.

“We heard that fresh milk, meat, vegetables and stuff like that were given out,” he said. “If we knew about it – we could use some fresh food too.

Randall and Bertina knew their community needed help. Luckily, when their longtime Cerritos friends, Noam and Keila Farbenbloom, called and asked how they are doing, the couple told them their community needed help. That’s when the Farbenblooms, along with their business (Native Visions) and employees, started a weeklong food and supplies drive at their business. The Farbenblooms received a huge amount of donations, including protective masks, baby diapers and diapering supplies, and some toys, over several days before loading up a van and a couple of smaller vehicles on the evening of May 26 and heading for the Navajo Nation early the next morning.

Randall and Bertina made flyers the day before and handed them out to area homes and made a list of people who needed food and supplies. The van and the two vehicles arrived in Cow Springs that Wednesday afternoon after 10 hours of travel, in addition to getting lost a few times. Immediately after they arrived, residents began showing up.

The Farbenblooms and their volunteers had to unload items before they could be distributed, which helped 80 households and some families in the White Mesa and Ts’ahbiikin areas where families had not yet received any food and supplies. “So, when everything was done, my wife and I, the boxes we had saved for elders that didn’t make it here, we went around and (delivered) them,” Randall said.

“That’s what we did until the sun went down,” he said. “We gave away everything. We weren’t left with anything.” “Some people came from outside of Cow Springs area,” Randall said.

“A lot of those people don’t have running water, so we gave them extra cases of bottled and gallons of water. Randall and Bertina met Noam and Keila about 10 years ago while traveling around California and across the country with their handmade arts and crafts business (Nizhoni Dreams).

The last time Randall and Bertina saw the Farbenblooms – whom they call their family – was a year-and-a-half ago at a powwow in Malibu, California. The couples and their families try to visit one another frequently.

“We’re very fortunate to know people out there, businesspeople who’ve become friends, and we’re blessed to know people like that who have a big heart and who want to help our family and our community,” Randall said. “Noam and Keila aren’t just friends, they’re family,” he said. “And they call the Cow Springs community family.

His donation drive got so big that he said, ‘Let’s help the entire community!’”

Delegate Paul Begay shouted, “Yá’át’ééh!” as vehicles pulled up to the food-box loading zone outside Tonalea Senior Center. “There’s fresh chicken, milk and eggs in the box,” he told drivers in Navajo. “So, when you get home, put them in the refrigerator or cook the meat right away.”

He joked with some people. “I’ll be there for supper as soon as I get done here,” he said. They laughed and Begay waved them off wearing latex gloves and an N95 mask, two personal protective equipment he wears while helping with coronavirus relief efforts in the five Western Navajo chapters – Bodaway-Gap, Coppermine, Kaibeto, LeChee, and Tonalea-Red Lake – he represents.

St. Mary’s Food Bank, a nonprofit, that day donated the food boxes, which included fresh chicken, three dozen eggs, milk, fruit and vegetables. “I didn’t see any sweet stuff in there, it’s all nutritious,” Begay said. “They are the kind of food people should be eating. This is a well-balanced, well-rounded food that St. Mary’s offered us. I’d like to take one box home because it has nutritive food.”

Of the five chapters Begay represents, Tonalea-Red Lake was the only chapter that had received one food delivery since the coronavirus pandemic began. “This pandemic has brought a lot of issues as far as survival here in Navajo Nation,” Begay said, adding that clear acts of generosity and resilience are happening every day on the Nation.

“But it’s a good thing that we have departments and organizations out there,” he said. “And even individuals who brought back the true meaning of humanity.” Begay said seeing acts of kindness and positivity across the Nation has inspired others to act, too. “You can see the appreciation on people’s faces, the sparkle in their eyes as they receive food,” he said. “You know they appreciate that.”

St. Mary’s Food Bank that day donated more than 200 food boxes to the Tonalea-Red Lake community. Latter-Day Saint missionaries from Tónaneesdizí were also on site to help load boxes into vehicles. “There are needs,” Begay said. “We were very ill-prepared for this pandemic – lack of water and lack of electricity.

“Imagine if we had those two, we wouldn’t even need to be relying on donations of food and water,” he said. “Our people would have water and power to sustain themselves. And all of this would be eliminated. I’m sure there would still be donations but not as much as we’re relying on right now.”

Begay added he’s thankful for St. Mary’s, which is taking steps to safely provide food and other resources for the Diné. St. Mary’s Food Bank, the country’s first food bank, has been providing emergency food for the Navajo Nation for a number of weeks.

And just a month ago, the organization made the largest single-day food distribution in its history to aid Western Navajo. Five semi-trailers transported 125,000 pounds of food – that served 2,500 families – to the Western Navajo Fairgrounds on May 22.

“And each family went home with more than 50 pounds of food,” explained Jerry Brown, spokesman for St. Mary’s Food Bank Alliance. “This was the largest distribution. I know that there were 300 folks that were quarantined – who weren’t able to come – and we were able to work with the (western) hospitals to get the food delivered to their homes.”

Families that day received three boxes: canned goods, vegetables and mixed dairy. “By the time you stack all of those boxes up, it was 50 pounds of food for each of the families,” Brown explained. “And if there were multiple families within a household, they went home with multiple boxes of food.”

St. Mary’s did a similar food giveaway in April, during which vehicles lined up for over five miles prior to its opening. Brown said St. Mary’s Food Bank officials are speaking with Diné leaders on a consistent basis, finding out what is needed on the Nation and how they can help.

“We’re working with all the tribal (chapter houses) directly,” Brown said. “So, when something pops up, and they need something, they can inform us, and we can get the food to the chapter houses for distribution. I’m not sure if we’re going to do another mass distribution, but if there’s a need for that, we can certainly provide it.”